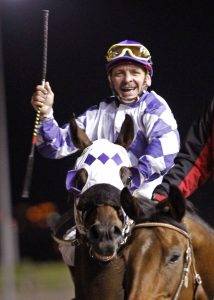 It was Mitchell striking first, riding Jimmy the Juice to a $21.60 mutuel for trainer Vann Belvoir—himself a former Emerald Downs riding champion—in race six at Santa Anita. For Mitchell, 54, it was his first Santa Anita victory in over 25 years, and the latest chapter in a comeback that began last fall for Emerald Downs’ all-time leading rider.

Less than 15 minutes later it was Bowen’s turn to shine with a $69.40 upset aboard Pass Due Payment for trainer Ricardo Perez in the sixth race at Golden Gate Fields.

The 2016 Emerald Downs’ champion with 110 wins, Bowen, 27, has been making his mark in the Bay Area this winter. He tied for seventh with 19 wins at the track’s fall meeting and already has three wins at the winter/spring meet that began last week. 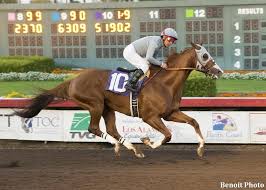 Although neither was victorious, Emerald Downs’ stakes winners Point Piper and B C Z Middleton continue to fare well in California and Arizona.

Point Piper was handed a near impossible task last month at Los Alamitos. The 2016 Longacres Mile was entered in the $180,000 Winter Challenge for 3-year-olds and up, the race that California Chrome used as a tune-up for next month’s $12 million Pegasus World Cup at Gulfstream Park.

One of the two best horses in training, California Chrome romped by 12 lengths under wraps in 1:40.03 for 1 1/16 miles. It was a perfect tightener for his highly anticipated rematch with Arrogate in Florida.

Point Piper, meanwhile, easily finished second and earned another $30,000 to push his total over $300,000 for 2016. In his last two starts, Point Piper has faced California Chrome and Midnight Storm, proving life can be tough for a nice horse without conditions.

Even though nine horses lined up against California Chrome, the race was deemed such a mismatch that neither place nor show wagering was allowed and the race still produced a $58,000 minus win pool.

B C Z Middleton has come a long ways the last two years for trainer Jeff Metz and owner/breeder William Burns. Beginning her career with four straight double-digit defeats at Emerald Downs in 2015, she woke up with a drop into the maiden claiming ranks, scoring by nine lengths late in the 2015 season. In 2016, she won the Washington State Legislators vs. older fillies and mares and finished second to Invested Prospect in the Seattle Stakes.

Currently with Metz at Turf Paradise, the just turned 4-year-old filly is living it up at Turf Paradise. She scored by 1-½ lengths in the Princess of Palms Stakes at 6 furlongs ad finished runner-up to Constellation in the City of Phoenix Stakes at 6 furlongs—the latter race adding luster as Constellation returned with a 12-1 upset in the Grade 1 La Brea Stakes last week at Santa Anita.

LUCARELLI APPEARS TO HAVE A GOOD ONE

Makaha Heat, owned and trained by Frank Lucarelli, appears to be developing into a star this winter in Northern California.

A California-bred by Heatseeker, Makaha Heat improved to 2-for-2 with a 2-length victory in a $40,000 optional claimer last week at Golden Gate, and she could be a contender in the $50,000 California Oaks on Saturday, February 11. Ridden by Irving Orozco, Makaha Heat ran 6 furlongs in 1:10.35 and earned a lofty 75 Beyer, up 15 points from her impressive maiden victory in November.

Be Faithful, dam of Makaha Heat, is the sister of Dance With Carson, producer of Emerald Downs’ champions Winning Machine and Champagneandcaviar.

December 26 was a big day for local horsemen at Golden Gate. Lazzarella, fourth to Makaha Heat in the November 27 maiden race, scored a $34.20 upset for trainer Blaine Wright and owner Luigi Di Pietro in a $31,000 maiden special weight later on the card, running six furlongs in 1:11.28 while defeating 3-5 favorite Americana.

Full brothers Its Allabout Jerry and Grindcicle both scored prominent victories last month at Portland Meadows, the former prevailing as the 2-5 favorite in a $9,000 allowance race and the latter registering a mammoth 43-1 upset in the Oregon His Stakes.

Oregon-breds by Grindstone-Icicle Angel, 5-year-old Its Allabout Jerry and 4-year-old Grindicle were both bred by Jack and Cookie Root.

Trained by Rigoberto Velasquez for owners Rancho Viejo and Lisa Baze, Its Allabout Jerry is clearly the top handicap runner in the Rose City. Winner of the Portland Meadows Mile in his previous start, the 2015 Oregon Horse of the Year was awesome in the allowance victory, scoring by 10 ¼ lengths in 1:41.29 for 1 1/16 miles—which is only .09 seconds off the track record established by Beau Julian way back in 1972. Its Allabout Jerry earned a career-high 94 Beyer and improved 7-3-5 in 25 starts with earnings of $97,955.

Trained by Rolland Fergason and owned by Hurliman Enterprises, Grindcicle has been a bit slower in his development. After winning just once in 11 previous tries, Grindcicle was ignored in the Oregon His, emerging from the fog for a three-quarter-length victory over 2-5 favorite Barb’s Boo in 1:12.51 for 6 furlongs.

YO Y ME CONTINUES TO ROLL IN PHOENIX

So Lucky easily was the best 2-year-old colt or gelding at Emerald Downs last year, winning three stake and over $100,000 in purses. But Arizona-bred Yo Y Me—who made a pair of appearances here last summer—is by far the best juvenile at Turf Paradise.

Since shipping to Arizona, Yo Y Me has reeled off four consecutive stakes victories and earned $124,515 for owner/trainer Kevin Eikleberry. The most recent score was a neck triumph in Saturday’s $30,000 Lost in the Fog Juvenile Stakes, in which Yo Y Me ($4.20) ran 6 ½ furlongs n 1:17.45 and earned a 66 Beyer.

At Emerald Downs, Yo Y Me finished second and third in a pair of $19,000 maiden special weights, the first won by The Chilli Man and the second by Ask Not.

At Portland Meadows, Kassie Guglielmino holds a 37-35 edge over Nathan Haar in the jockeys’ standings. Eliksa Kubinova is third with 33 wins. . .In the trainers’ race, Rigoberto Velasquez has 24 wins while Jonathan Nance is second with 19 wins. . . Metz is enjoying a good season at Turf Paradise with 11 wins from just 36 starts. . .Emerald Downs’ Promotion Manager Gary Dougherty reports Larry Mars was the overall winner of the Sunday Sports Pick 4 contest which concluded this past weekend. . .Only 30 days until training begins at Emerald Downs!