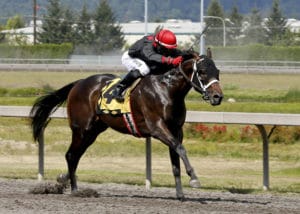 BATTLE FOR WASHINGTON BRED OF THE YEAR

In the coming weeks, a four-person committee will convene to decide the various WTBOA champion horses for 2016, with the winning connections honored Saturday, February 25 at the annual awards banquet at Emerald Downs.

Regarding the most important category—Horse of the Year—I don’t envy the committee. It appears to be a two-horse race between So Lucky and Stryker Phd, and either choice would be a good one.

So Lucky, a 2-year-old by Coast Guard-Miss Pixie, was a superstar this season at Emerald Downs. He won his first four starts by a combined 21 ¾ lengths, including easy victories in the Emerald Express, WTBOA Lads Stakes and Washington Cup, before finishing runner-up in the Gottstein Futurity.

Trained by Howard Belvoir for Pegasus Too and Rising Star Stable, So Lucky was among four horses to surpass $100,000 in earnings this year at Emerald Downs and ranks among the fastest 2-year-olds in track history.

Stryker Phd, a 7-year-old by Bertrando-Striking Scholar, is bidding for a third straight Washington Horse of the Year crown for trainer Larry Ross and owners Jim and Mona Hour.

Stryker Phd’s accolades include an unprecedented third straight victory in the Muckleshoot Tribal Classic, a 5 ¾ length romp in a quick 1:41.30, and a head victory in last month’s $100,000 Berkeley Handicap (G3) at Golden Gate Fields. The latter was the third graded victory for Stryker Phd and elevated him to No. 4 all-time in Washington earnings.

Bidding to become only the fourth two-time winner of the esteemed race, Heza Dasha Fire lugged out in the final yards as Zoomin for Spuds pushed by for a 10-1 upset in 21.30 seconds for 440 yards. The winner, an Idaho-bred 3-year-old that began his career last year at Les Bois Park, earned $300,000 and nearly tripled his career earnings for owner/breeder Jim Walker of Bellevue, Idaho.

Owned and bred by Don, Kathy and Shawn Meneely of Kennewick, Heza Dasha Fire is a 4-year-old by Walk Thru Fire-Dasha Freda. The sorrel gelding is the reigning AQHA World Champion and the richest horse of any breed in Washington history.

The 2017 Emerald Downs poster schedules—featuring 2016 Horse of the Meeting O B Harbor—already are out (pictured above). Incidentally, only 51 days until training begins and 117 days until opening day. . .Rocco Bowen finished in a seventh place tie with 19 wins at the Golden Gate fall meeting that ended Sunday. . .Golden Gate’s winter/spring meet begins Monday, December 26, the same day Santa Anita opens for its 72-day winter/spring meet. . .Women riders continue to dominate at Portland Meadows, with Kassie Guglielmino leading Eliska Kubionva by a 29-27 margin. . .Although Portland Meadows continues thru January 4, the Rose City oval staged its biggest day of racing on Sunday, Dec. 4, with a stakes quadruple header for Thoroughbreds. In the $25,000 Portland Mile, Its Allabout Jerry ($4.40) romped by 4 ½ lengths in 1:36.31 and tied his career-high with a 90 Beyer. The 2015 Oregon Horse of the Year is owned by Rancho Viejo and Lisa Baze and trained by Rigoberto Velasquez. . .Trainer G D Khalsa and owner Michael Pollowitz had a big day at PM—Parkers Delight ($5.60) capturing the $15,000 Portland Distaff, and Gross Misconduct ($2.40) and Pete’s Slew running one-two in the $10,000 Overnight Handicap for 3-year-olds and up. . .With only nine starters at PM, Khalsa is 7-1-0 with a $7.69 ROI. . .Nice effort by Washington-bred Mach One Rules to finish third vs. older horses in a $34,000 allowance race Sunday at Golden Gate. Chips All In ($10.80) prevailed in 1:09.84 for Jerry Hollendorfer and George Todaro, and Longacres Mile eighth place finisher Star Student finished second for Fred and Cindy Desimone and Glyn Kelly and Anne MacLennan. Star Student was 2-2-0 in four starts this fall at Golden Gate, including a second consecutive win in the Oakland Stakes, and recorded Beyers of 96, 88, 90 and 87. . .Gallyn Mitchell rode Badasmywifeletsmeb to a $39.60 upset last week at Los Alamitos. It was Mitchell’s first win on the major circuit since beginning his comeback last month. . .Mitchell rides Prohibition for trainer Vann Belvoir in a $25,000 claiming race Thursday at Los Alamitos. . .Aithon Stable’s Gloria’s Angelo made it two straight wins with a head triumph in a $12,500 starter allowance Friday at Golden Gate. . .Yo Y Me, second and third in a pair of maiden special weights at Emerald Downs, is mopping up vs. Arizona-breds at Turf Paradise. The 2-year-old Dixie Chatter gelding soared over $100,000 in earnings with a 7-length victory in Saturday’s $37,000 Arizona Breeders’ Futurity, already his third stakes wins of the meet.