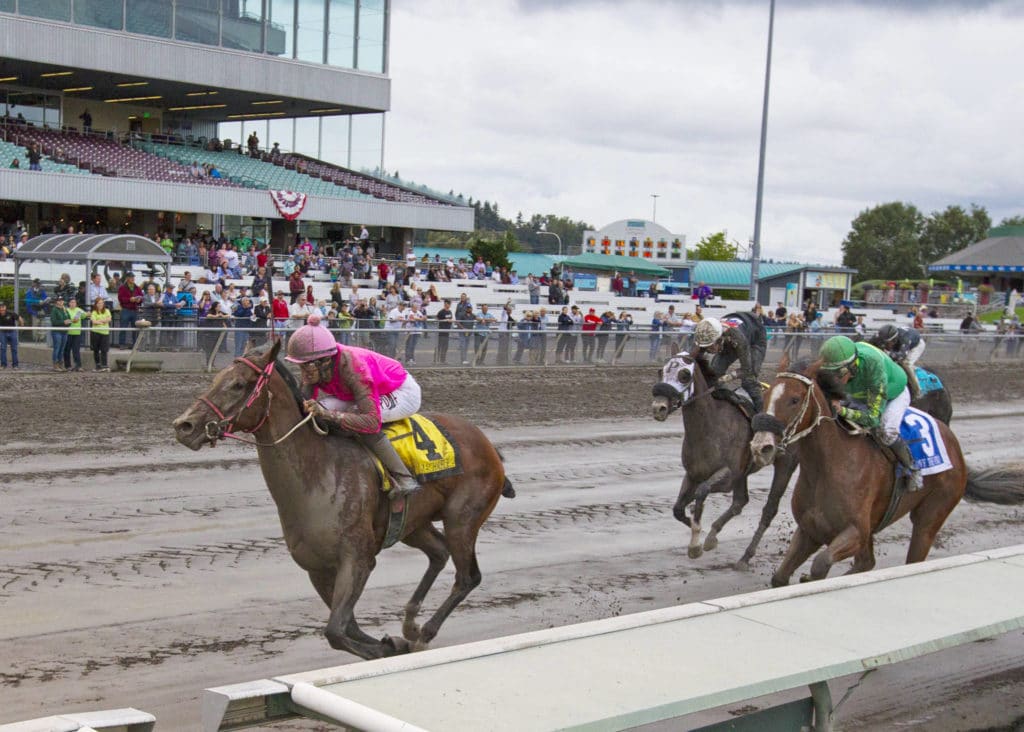 It was the first stakes victory at Emerald Downs for the jockey, trainer and owner.

Last of 10 midway on the turn, Unmachable gathered momentum into the lane, swung outside and rallied strongly to sweep past the leaders in the final yards. The official winning margin was 1-¼ lengths.

“I’ve been working this horse for quite a while, and I knew he had a lot of talent,” said Anaya, a 20-year-old Kansas native. “He got into the bit at the three-eighths (pole), and I just kept him out of trouble.”

A Washington-bred by Macho Uno-Point of Reference, Unmachable earned $24,750 for the victory. Her dam earned $328,687 and finished runner-up in three straight stakes here in 2009.

Love the Vino gained command past mid-stretch but was overtaken late and settled for second place. Ridden by Ryan Barber at 120 lbs, Love the Vino paid $9.80 and $6.40.

Forty Smooches, ridden by Kevin Orozco at 120 lbs, overtook Gold Crusher and Code Charlie in the stretch but was out finished late and paid $6.

Code Charlie sprinted clear early, set fractions of :21.85 and :44.26, but gave way when challenged by Gold Crusher and Harbors Rule into the stretch. 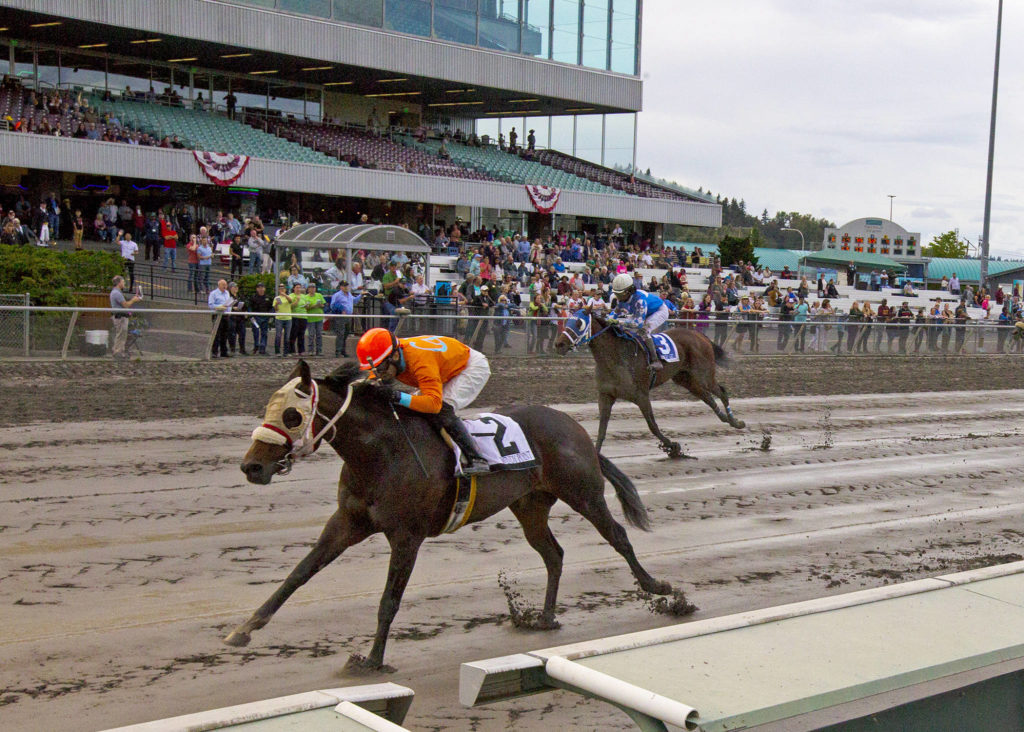 In the $50,000 Washington Cup Juvenile Filly Presented by Pegasus Training and Rehabilitation Center, Windy Point had her consistency rewarded with a 3 ½-length victory over You Go Girl.

Coming off runner-up finishes in the Angie C Stakes and Barbara Shinpoch Stakes, Windy Point enjoyed clear sailing Sunday. Breaking sharply from the No. 2 post, she dueled with Known Value and Miss Prospector through fractions of :21.92 and :44.84, shook off the latter in upper stretch and widened to the wire.

Discreet Demon, a 71 to 1 long shot, finished third under Connie Doll and paid $13.80 to show, while Smashing Success, Miss Prospector, For You Only, Pinchalinch, Salty Little Lass, Known Value and Lovefliesonwings completed the order of finish.

With the victory, Gutierrez upped his record Washington Cup victory total to 21, and his 64 stakes wins overall rank No. 3 all-time.

Coast Guard has sired two stakes winners at the meet—Show Me the Mints (King County Express and Windy Point—and his 15 overall wins rank third this season.

NOTES: Sunday’s $0.50 Pick 5 paid a track record $37,972 to one winning ticket, breaking the previous mark of $29,739.60 set April 28. . .The track was labeled sloppy for races 1 through 5 and wet-fast races 6 through 10, marking the first time in 61 days this season the track wasn’t labeled fast at the beginning of the day. . .Juan Gutierrez rode four winners Sunday, giving him an even 50 for the season, and he’s now 49 wins from tying Gallyn Mitchell’s all-time record of 1,419 wins at Emerald Downs. Gutierrez is the seventh rider with a four-bagger at the meeting. . .In Sunday’s $18,500 allowance/optional claimer for 3-year-olds and up, come backing Owner’s Prestige ($18.80) held off stable mate Oh Marvelous Me to give trainer Blaine Wright a one-two finish. . .Exiting four straight stakes at Emerald Downs, Donnybrook Stable’s Paddy’s Secret ($4.40) rallied past Diamonds R to win the $18,500 Roger Kaczor Memorial Purse for fillies and mares. . .Alex Anaya had his first two-win day at Emerald Downs, and both were aboard debuting 2-year-olds—Unmachable in the WA Cup Juvenile and Race Home ($9.40) in an $18,500 maiden special weight for 2-year-olds. . .Jess Candy Lips ($5.20) prevailed in the Sunday opener for Quarter Horses, running 300 yards in :16.38. . .Live racing resumes Friday at 6:30 p.m.
–##–