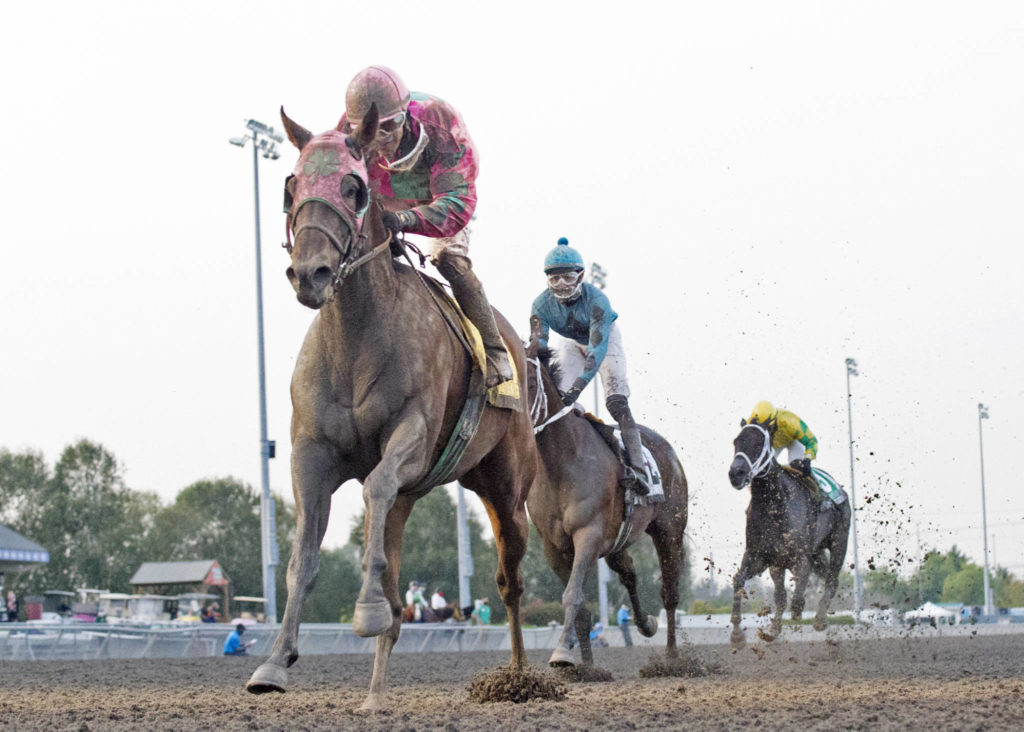 Ridden by Leslie Mawing at 121 lbs, Unmachable ran a mile and one-sixteenth in a meet-fastest 1:40.71and paid $8.20 as third choice in the wagering. Jack McCartney is the trainer for owner Tawnja Elison of Eagle, Idaho.

Papa’s Golden Boy, the early leader, ducked out in upper stretch to cause a chain reaction bumping incident that involved both Elliott Bay and Makah Lane, the latter stumbling badly and nearly unseating Gutierrez, but horse and rider somehow regained balance and finished third.

Unmachable, however, was not about to be beaten Thursday. Racing for the second time in a week, the dark bay gelding lagged at the tail as Papa’s Golden Boy set fractions of :23.06, :45.28 and 1:08.65. Commencing a bid on the last turn, Unmachable gathered momentum inside, rallied strongly into the lane, split horses and gained the lead past mid-stretch and won going away.

McCartney had planned to turn out Unmachable following the gelding’s allowance victory last week but called an audible.

“He really came off the last race really well and we decided to give it a try,” McCartney said.

A 3-year-old Washington-bred by Macho Uno-Point of Reference, Unmachable is 4-2-2 in eight starts with earnings of $111,515, including $22,000 for Thursday’s victory. He now has two Washington Cup wins and three stakes victories overall.

Elliott Bay also enjoyed a fine season, compiling a 2-1-0 mark in four starts for trainer Frank Lucarelli and owners Chad Christensen and Josh McKee. The 5-year-old Harbor the Gold gelding scored a victory in the $40,000 Mt. Rainier Stakes before finishing fourth in the $100,000 Longacres Mile.