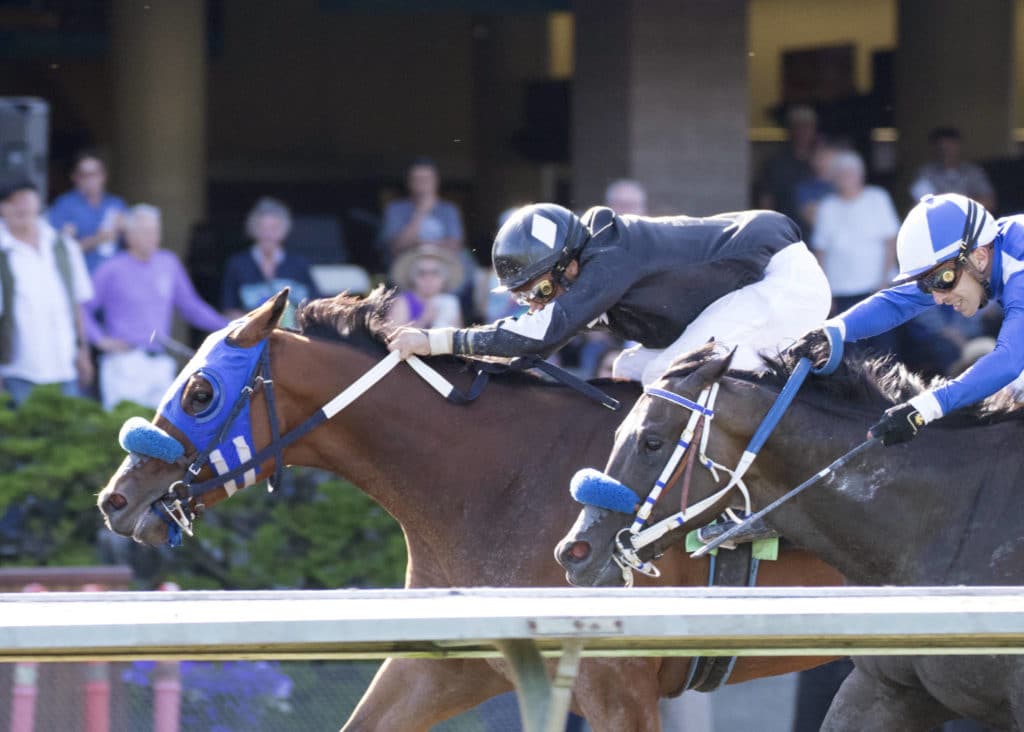 AUBURN, Wash. (July 14, 2019) – Perfect Dude had his consistency rewarded Sunday, edging past stable mate Rally Cat in the final strides for a neck victory in the $50,000 Seattle Slew Stakes for 3-year-old colts and geldings.

The outcome marked the fourth time this season that Wright has saddled the first and second place finishers in a stakes race, and upped his meet-leading total to seven wins in the first 10 stakes. In fact, the stable has so much depth that even with unbeaten Baja Sur sidelined Sunday, Wright still managed to saddle the top two finishers.

A Washington-bred by Majesticperfection, Perfect Dude is a Hansen home bred out of the stakes winner Gadget Queen, a daughter of Flying With Eagles who gave Wright one of his first stakes wins as a trainer in 2008.

Sunday’s stretch run was a virtual match race with Rally Cat and Perfect Dude rallying in tandem to the wire. They swept past Makah Lane and My Grandpa in mid-stretch, and battled head and head to the finish with Perfect Dude proving narrowly best.

Prior to Sunday, Perfect Dude finished third to Baja Sur in both the Auburn Stakes and Coca-Cola Stakes, and had battled through the stretch in both races. Sunday’s victory, worth $23,650, boosted Perfect Dude’s bankroll to $49,230 with an overall record of 2-0-2 in six starts.

The Hansens rank No. 1 at the meet in earnings, $143,180, including stakes wins by Best of Me and Perfect Dude, and runner-up finishes by 7-year-old gelding Oh Marvelous Me in the Governors Stakes and Budweiser Stakes. 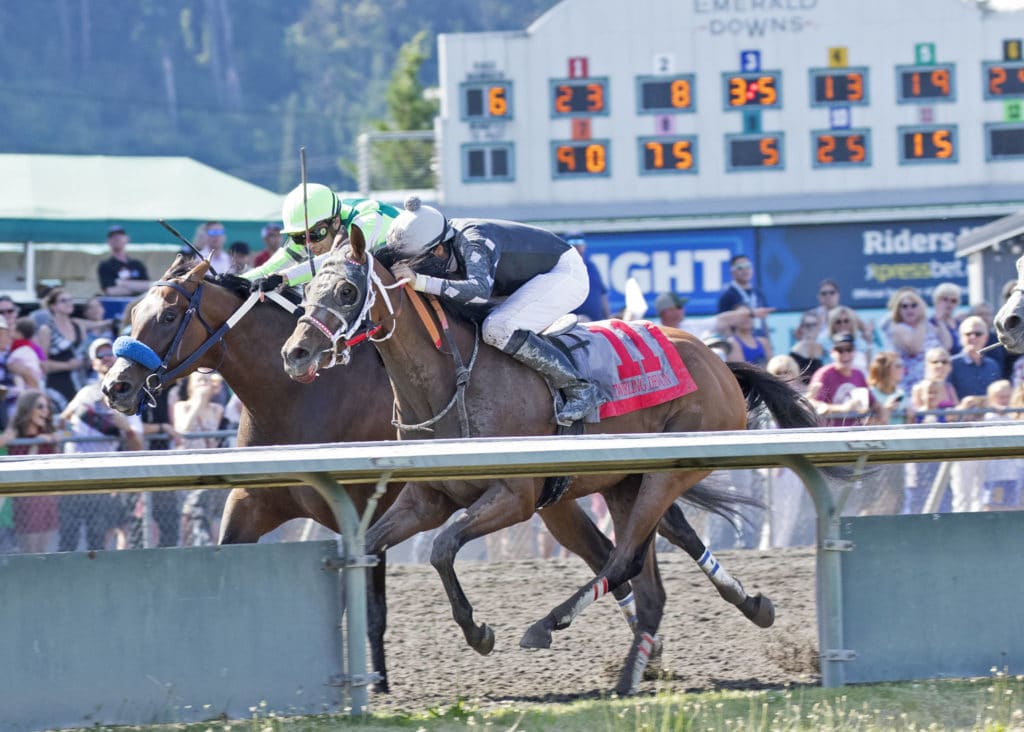 Rallying from last in the 11-horse field, Twirling Devon collared odds-on Mucho Amor in the final strides for a neck victory in the $50,000 Irish Day Stakes for 3-year-old fillies.

Although wide on the first turn, Twirling Devon saved ground the final six furlongs and burst through inside and wore down Mucho Amor for the victory.

A Florida-bred by Twirling Candy-Just Say Hey, Twirling Devon is 3-2-0 in seven career starts with earnings of $75,421, including $24,200 for Sunday’s victory. She previously won the Arizona Juvenile Filly last year at Turf Paradise.

Mucho Amor, the 3 to 5 choice ridden by Juan Hernandez at 122 lbs, overhauled Lady Campbell into the lane, was 1-½ lengths clear past mid stretch and just failed to last. She now has a win and two seconds in the first three stakes for 3-year-old fillies, and an overall mark of 3-2-0 in seven starts with earnings of $110,990.

Mucho Amor paid $2.60 and $2.20, while Northwest Factor finished 2 1/2 lengths back in third and paid $4.80 to show. Senoradiablo, also trained by Ortiz and owned by Bankers, finished fourth, and was followed by Alittlelesstalk, Lady Campbell, Above All Names, Someday Special, If you Want It, La Principessa and Lasting Light.

Although a Florida-bred, Twirling Devon was an $8,500 purchase at the 2017 Washington Summer Yearling Sale.

The $50,000 Washington Oaks at 1 1/8 miles is next for 3-year-old fillies on Sunday, August 11. It’s one of four stakes to be run on the initial Championship Sunday at Emerald Downs.

NOTES: Karen and Mickey Taylor, owners of 1977 Triple Crown winner Seattle Slew, were honorary stewards for the Seattle Slew Stakes. . .Only four jockeys won races on the nine-race card: Franklin Ceballos leading the way with three, while Orozco, Eddie Martinez and Gary Wales rode two winners each. . .Wales leads Orozco 58-38 atop the standings, and now has wins on 26 consecutive race cards. . . Orozco has 10 career stakes wins at Emerald Downs. . .Turntheclocktozero ($2.60) scored a gate to wire victory in the $18,500 maiden special weight for 2-year-olds, running 5 ½ furlongs in 1:04.31. Ridden by Juan Gutierrez for Grasshopper Racing and Kay Cooper, Turntheclocktozero is by Harbor the Gold-Emmy’s Storm and brother to three $100,000 earners. . .At Hastings Racecourse, He’s the Reason ($13.90) captured the $50,000 Lieutenant Governor’s Handicap for 3-year-olds and up in 1:44.06 for 1 1/16 miles. . .Live racing resumes Friday with a seven-race card at 6:30 p.m.
–##–