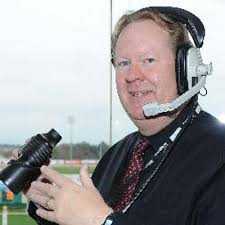 Harris, who begins his duties Sunday, April 22, 2018, becomes only the third announcer in the track’s 22-season history. He succeeds Matt Dinerman, who was announced earlier this week as the new voice of Golden Gate Fields.

“Announcing horse races has been a lifelong passion for me, and the opportunity to announce at Emerald Downs is a dream come true,” Harris said. “I have enormous respect for the tradition of the sport in the Pacific Northwest, and the many fine horsemen and horsewomen in the area. I can’t wait to get started.”

“Tom Harris is a familiar voice to Washington race fans from his days at Yakima Meadows and also familiar to race fans around the country,” said Emerald Downs Racetrack and Casino President Phil Ziegler. “Tom has extensive experience in the announcer’s booth, and we’re fortunate that he’s already part of our team. This will make for a seamless transition.”

In addition to horse racing, Harris also has broadcast minor league basketball, worked as a television sports director/producer in the Nebraska/Iowa/South Dakota region, and spent nine years as PA announcer for the Chicago Cubs in spring training. Horse racing, however, remains his favorite pastime.

“No two races are the same and each brings a new challenge and a new thrill,” Harris said. “I will always enjoy this exciting ride that life has allowed me.”