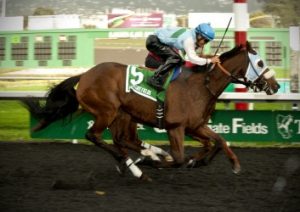 Two-time Washington Horse of the Year Stryker Phd returns to action Friday in a $33,000 allowance race at Golden Gate Fields.

Stryker Phd drew the No. 1 post-position and is the 7-5 morning line favorite with regular rider Leslie Mawing up at 124 lbs. for trainer Larry Ross and owners Jim and Mona Hour. Carded as Race 2 at 1:15 p.m., the one-mile allowance will be run on Golden Gate’s synthetic Tapeta surface.

Although Stryker Phd missed in his bid for a third straight Longacres Mile win, the Bertrando gelding closed out 2016 strong with victories in the Muckleshoot Tribal Classic at Emerald Downs and Grade 3 Berkeley Handicap at Golden Gate Fields, the latter triumph his first win in three tries on a synthetic track.

G.G. Ryder, who missed by a head vs. Stryker Phd in the Berkeley Handicap, is 3-1 second choice, and Bronze Star, winner of the Bull Dog Handicap at Fresno two starts back, is 7-2 third choice. G.G. Ryder (co-owned by George Todaro) and Bronze Star are both trained by Jerry Hollendorfer.

Rounding out the field are Indian Brut, runner-up to Star Student in the Oakland Handicap and 10th in the Longacres Mile, and Tamarando, leading earner in the field with $715,078. 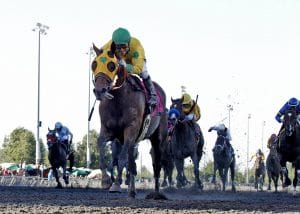 Point Piper is winless in four starts since his track record 1:32.90 in the Longacres Mile five months ago, but has finished runner-up in his last two starts while facing Midnight Storm in the Native Diver Handicap (G3) and California Chrome in the Los Alamitos Winter Challenge. A 7-year-old trained by Jerry Hollendorfer, Point Piper is 8-1 in the San Gabriel, mainly due to his inexperience racing on turf.

By Giant’s Causeway-Imagine, Point Piper earned his maiden win on the turf four years ago in Ireland but is just 1-for-8 on the surface and might benefit from a surface switch Saturday (60 percent chance of rain Saturday in Arcadia, Calif.)