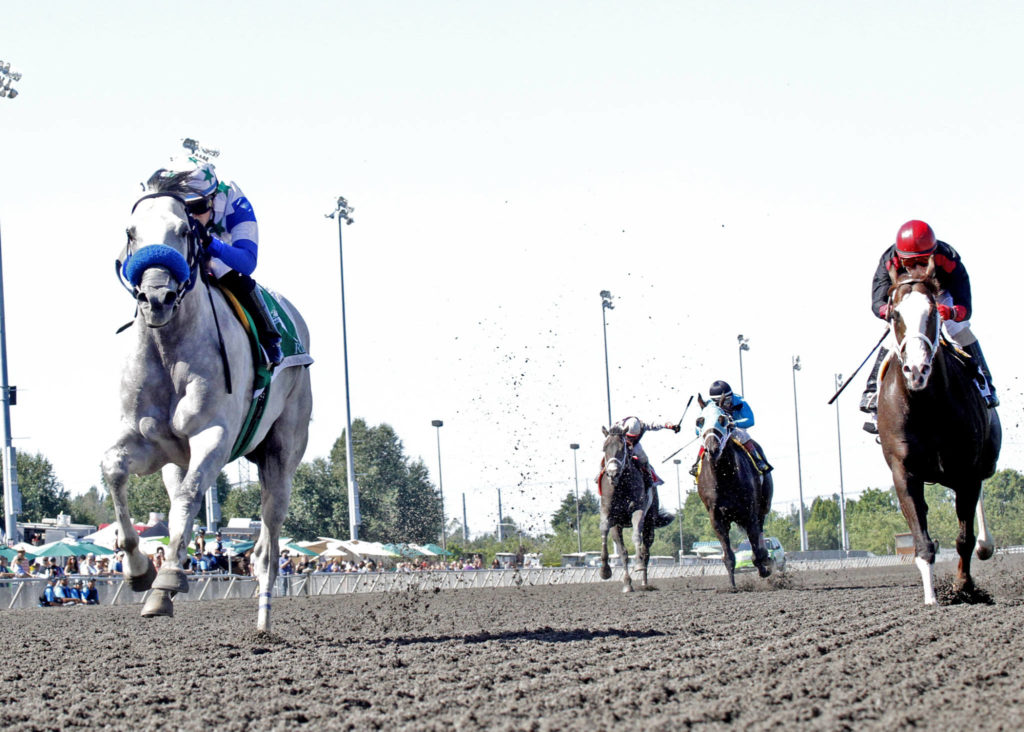 AUBURN, Wash. (July 15, 2018) – Riser authoritatively stamped himself as the top local candidate for the Longacres Mile, racing to a brilliant 2 ¼-length victory over Barkley in the $50,000 Mt. Rainier Stakes for 3-year-olds and up.

Wright, incidentally, saddled three stakes winners Sunday to tie his own track record for most stakes wins in one day. In addition to Riser, the 43-year-old Wright had wins with Baja Sur in the $50,000 King County Express and Top Quality in the $50,000 Boeing Stakes.

Riser has now finished first in all three stakes this season for older horses, and the Mt. Rainier helped make amends for a tough disqualification in last month’s Budweiser Stakes.

“The plan worked out today, and we didn’t muck out anybody at the start,” Wrights said. “Our ultimate goal is the next race. Let’s hope he pulls up well, and we’re on to the (Longacres Mile).”

Barkley, with Javier Matias riding at 120 lbs, ran a smashing race to easily finish second, and actually gave Riser a run for the money through the lane. Saving ground throughout, Barkley accelerated on the last turn and finished strongly to the wire, paying $4.40 and $2.60.

Mach One Rules, ridden by Austin Solis at 120 lbs, held third and paid $2.40 to show. The 5-year-old gelding had the unenviable task of chasing Riser early, and gave way gradually through the stretch

Opportunistic and Dedicated to you completed the order of finish.

The 83rd running of the $200,000 Longacres Mile (G3) on Sunday, August 12, figures to have its usual assortment of shippers from California and Canada. 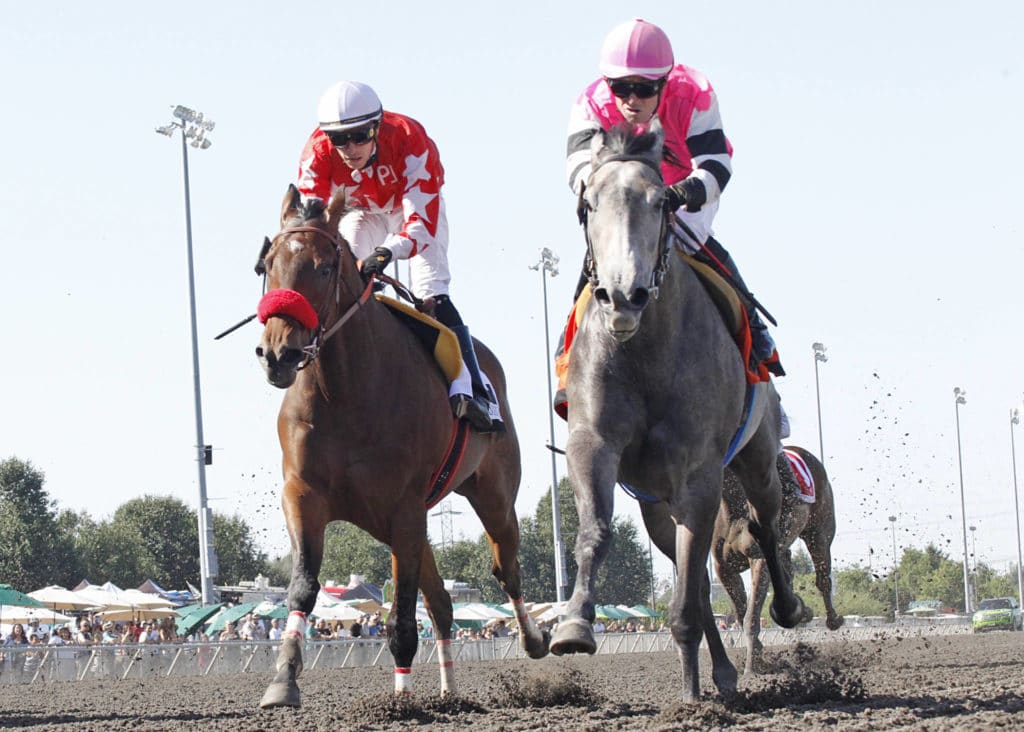 A resilient Northwest Factor re-rallied and scored a three-quarter-length victory over even-money favorite Aikman Juliet in the $50,000 Angie C Stakes for 2-year-old fillies.

A Kentucky-bred by The Factor-East Side Charley, Northwest Factor earned $29,370 for her maiden victory. The gray filly had shown promise in three previous starts, but Sunday’s victory was a breakthrough.

“We’ve always been pretty high on this filly, and I though she might be stakes material,” Bullock said. “She really dug in today”

Bullock now has four wins at the meet, three in stakes races. Bullock also conditions Sippin Fire, currently the top 3-year-old on the grounds, a Harbor the Gold gelding also owned by How We Roll #4.

Lady Campbell, ridden by Eswan Flores at 119 lbs, rallied from last to finish third and paid $3.80, while Senordiablo, Sunshine Emily and Lucy’s Eclipse rounded out the order of finish.

The $50,000 Barbara Shinpoch Stakes at six furlongs is next for 2-year-old fillies on Sunday, August 12.

Based on his first two starts, the sales topper at last year’s WTBOA Summer Yearling Sale looks like a steal.

Baja Sur—purchased for $67,000 last August—scored a dominating 10 ½-length victory in the $50,000 King County Express for 2-year-old colts and geldings.

Ridden by Erick Lopez, the bay gelding zipped 5 ½ furlongs in 1:03.13—over a full second faster than fillies in the Angie C—and paid $2.80, $2.20 and $2.10. Wright, winning his second of three stakes Sunday, trains Baja Sur for John and Janene Maryanski and Gail and Gerald Schneider.

“He’s the real deal and such a neat horse,” Lopez said. “Obviously he has a very bright future.”

Breaking from the No. 1 post-position, Baja Sur opened a clear early lead through fractions of:21.75 and :45.06, entering the lane 4 ½ lengths clear of Verynsky. He widened the margin through the stretch, finishing with the second biggest blowout in the 23-year history of the race.

Verynsky, with Gary Wales riding at 118 lbs, held second and paid $11.60 and $4.20, while Sky Confidential, ridden by Kevin Orozco at 118, finished third and paid $3.40. The Great Nation, Az Dreamer and Jack Van Berg completed the order of finish.

The $50,000 WTBOA Lads Stakes at six furlongs is next for 2-year-old colts and geldings on Sunday, August 12. 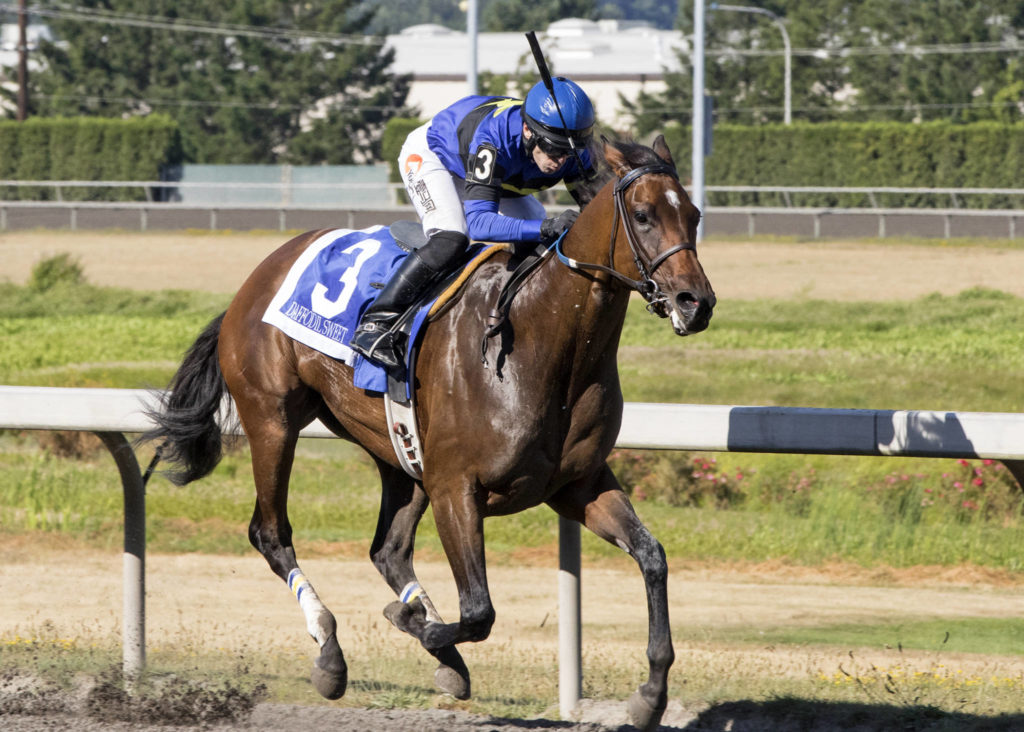 Top Quality pours it on late

Top Quality asserted her considerable class through the stretch, powering home for a 3 ¾-length victory in the $50,000 Boeing Stakes for older fillies and mares.

In sixth place early, Top Quality rallied four wide on the second turn and exploded to a three-length lead past mid-stretch.

It was a devastating move that capped the filly’s third career stakes win.

“I just let her do her thing,” Orozco said. “She kind of let me know when it was time to go, and she really responded.”

A 4-year-old Kentucky-bred by Top Quality-Lemon Bay, Top Quality is 4-1-2 in 10 starts with earnings of $118,479. She now has two stakes wins at Emerald Downs and also won a stakes last month at Hastings Racecourse.

No Talking Back, with Erick Lopez aboard at 119 lbs, finished third and paid $4.20, while Jerre to Carrie, Blazinbeauty, Sheeza Sassy Girl and My Heart Goes On completed the order of finish.
The $50,000 Emerald Distaff at 1 1/8 miles is next for older fillies and mares on Sunday, August 12.

NOTES: Wright added a fourth winner Sunday as Fortunate Cookie ($5.20) prevailed in a $7,500 claiming race for 3-year-old fillies. . .The last four-win day by a trainer at Emerald Downs was Joe Toye on August 5, 2017. . . Wright, who had 11 stakes wins last season, now has seven at the 2018 meeting. . . Wright’s previous  triple stakes winning day was August 27, 2017. . .Riser joined Sippin Fire as the only double stakes winners at the 2018 meeting. . . Hall of Fame jockey Julie Krone was honorary steward for the Mt. Rainier Stakes. . . Owner Jared Chappell said Riser is named after a song by country singer Dierks Bentley. . .Riser accounted for $35,370 of $55,716 in the win pool. . .On the day France captured the 2018 World Cup, Frenchman Julien Couton rode three winners at Emerald Downs. . .Kevin Orozco also had three wins and Erick Lopez had two. . . Rocco Bowen had one win Sunday and tops the standings with 63 wins, while Couton and Orozco are tied for second at 41 wins apiece. . .The $0.50 all stakes Pick Four paid $22.65. . .Betting favorites had a good weekend, compiling a 12 for 25 mark over the three days. . .Party for One ($10.60) became a triple winner at the meet with a victory in race four. . .Live racing resumes Friday with first post 6:30 p.m. 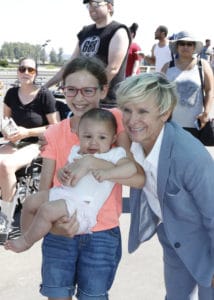