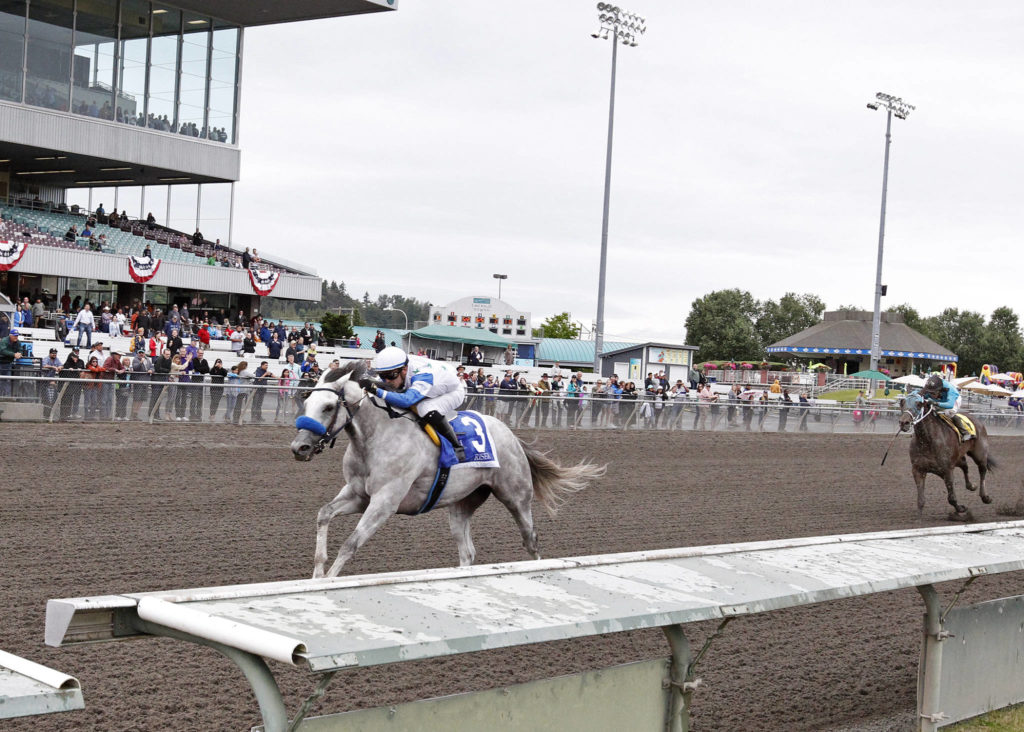 Barkley, the defending champion, rallied from last to finish second while Mach One Rules took third in the five-horse field.

The track’s Top 3-Year-Old of 2017, Riser improved to 4-1-0 in five career starts at Emerald Downs, scoring victories at three different sprint distances—5 ½, 6 and 6 ½ furlongs—along with a win at 1 1/8 miles in the Emerald Downs Derby.

“I have a lot of respect for those horses (Riser) ran against today,” Wright said. “He got away with a :22 1/5 first quarter, which was nice considering 2-year-olds went :21 and change earlier today.”

Breaking from the No. 3 post-position, Riser sped to the lead at once and held a clear advantage while setting fractions of :22.23, :44.61 and :56.16, and was three lengths clear into the lane. From there, Riser had plenty left to turn back Barkley and Mach One Rules.

“My horse was ready to go and broke sharply,” Hernandez said. “When I asked him in the stretch, he responded.”

Barkley and Mach One Rules both ran their usual good races, but simply had too much to overcome Sunday.

Last early, Barkley hugged the rail throughout and finished strongly for second, returning $3.20 and $2.10. Regular rider Javier Matias was aboard at 119 lbs.

Mach One Rules, Kevin Orozco riding at 122 lbs, raced four-wide on the turn and finished well for third, a half-length behind Barkley.

Dedicated to You and So Lucky, who raced closest to Riser on the backstretch, rounded out the order of finish.

Although he didn’t win, Barkley finished ahead of Mach One Rules for the eighth time in 11 career matchups.

NOTES: Hernandez, currently fourth with 78 wins at Golden Gate Fields, is 2 for 2 in stakes at Emerald Downs. He rode City by the Bay to a victory in the 2014 Seattle Stakes for trainer Billy Morey. . .Wright is now tied with Larry Ross for eighth place all-time in Emerald Downs’ stakes wins with 24. . .Wright’s record the last two seasons in EmD stakes races: 35-13-6-4-$471,945. . .Sunday’s card also featured the season’s first 2-year-old races, one each for fillies and colts and geldings. In the fillies race, Profound Legacy ($8.80) rolled to a 7 ¾ -length victory in :57.86, and in the colts and geldings race Jackwain ($9.80) rallied to win by 3 ¾ lengths in :59.25. . . A Kentucky-bred by Proud Citizen-El Fasto, Profound Legacy is a full sister to 2012 Kentucky Oaks (G1) winner Believe You Can. . .A Washington-bred by Kafwain, Jackwain is the first foal out of Music and Me, a sister of Emerald Downs’ stakes winners Grace Bay and Irene’s Bonus Baby. . .Jockey Anne Sanguinetti was 2 for 2 Sunday with two more long shots—Endangered ($17.60) in race two and Natural Marina ($37.20) in race seven. Sanguinetti has nine wins from 48 mounts including four win payoffs higher than $37. . .Eswan Flores also rode two winners including a $24.60 upset aboard Tumac Mountain in the ninth race finale. Tumac Mountain’s victory capped a 3 for 3 week for trainer Jose Navarro. . .Rocco Bowen returned to action and scored a victory on Colleen’s Diamond ($7) in race eight for $20,000 claiming fillies and mares. Bowen owns a 31-20 lead on Kevin Orozco in the standings and needs three wins for 500 at Emerald Downs. . .Jeff Metz tops the trainers with 17 wins including a second straight victory by Hill Croome ($10) in the Sunday opener. . .Wright also had a one-two finish Sunday in a $27,000 allowance race at Golden Gate Fields, with Sheeza Sassy Girl ($5) defeating Reginella by a half-length in 1:44.45 for 1 1/16 miles on turf. . .Live racing resumes Friday with first post 6:30 p.m.