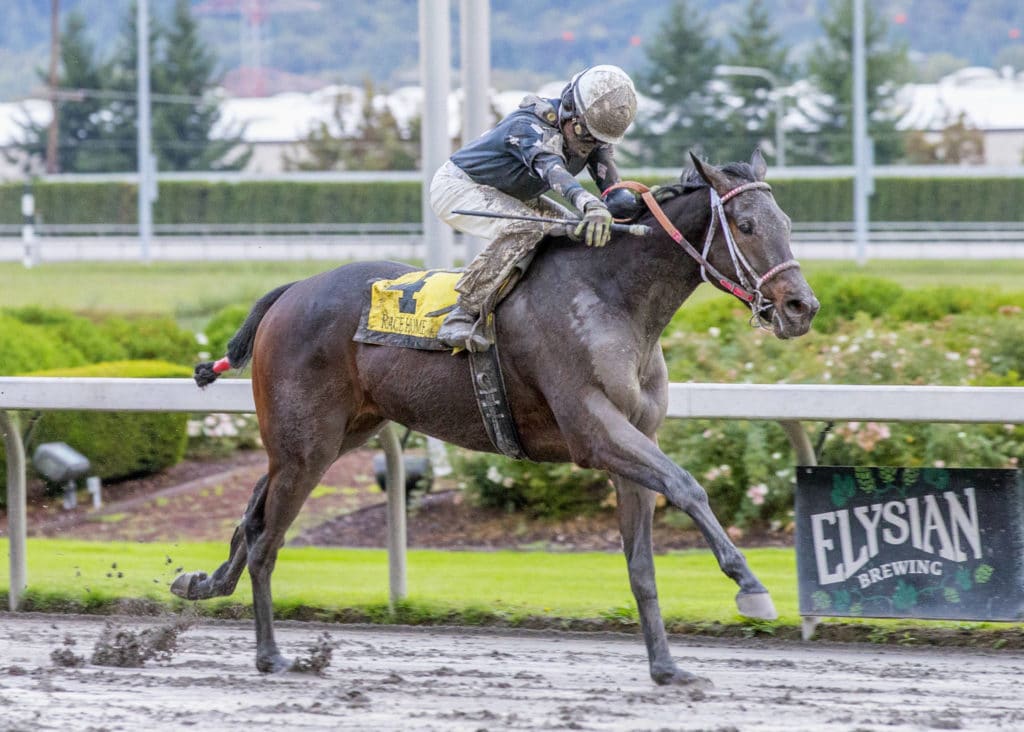 In winning the season’s richest and most prestigious event for juveniles, Race Home earned $51,150 and also locked up honors as the track’s Top 2-Year-Old Colt or Gelding. A Kentucky-bred by Race Day, Race Home is undefeated in two starts with earnings of $61,325. He was a $29,000 purchase at the 2018 WTBOA Summer Yearling Sale.

Stretching out in distance after an impressive debut two weeks ago, Race Home was fourth choice in the wagering, and lagged far back as Turntheclocktozero and the filly Windy Point dueled through fractions of :22.77, :45.88 and 1:110.71. Saving ground until the head of the lane, Race Home angled out for racing room, and then swept past Turntheclocktozero and Unmachable with a powerful late burst.

“I was way back there and he was pulling me, and I knew he was going to finish strong,” Krigger said. “When we turned for home, we exploded.”

Unmachable, who debuted with a stakes victory in the Washington Cup Juvenile Colt & Gelding, ran another solid race Sunday but had to settle for second place. Racing far wide on the last turn, the Macho Uno gelding shifted to the rail for the stretch and paid $5.40 and $3.80 for place and show. Ridden by Alex Anaya and trained by Jack McCartney Unmachable earned $18,600 for owner Tawnja Elison. 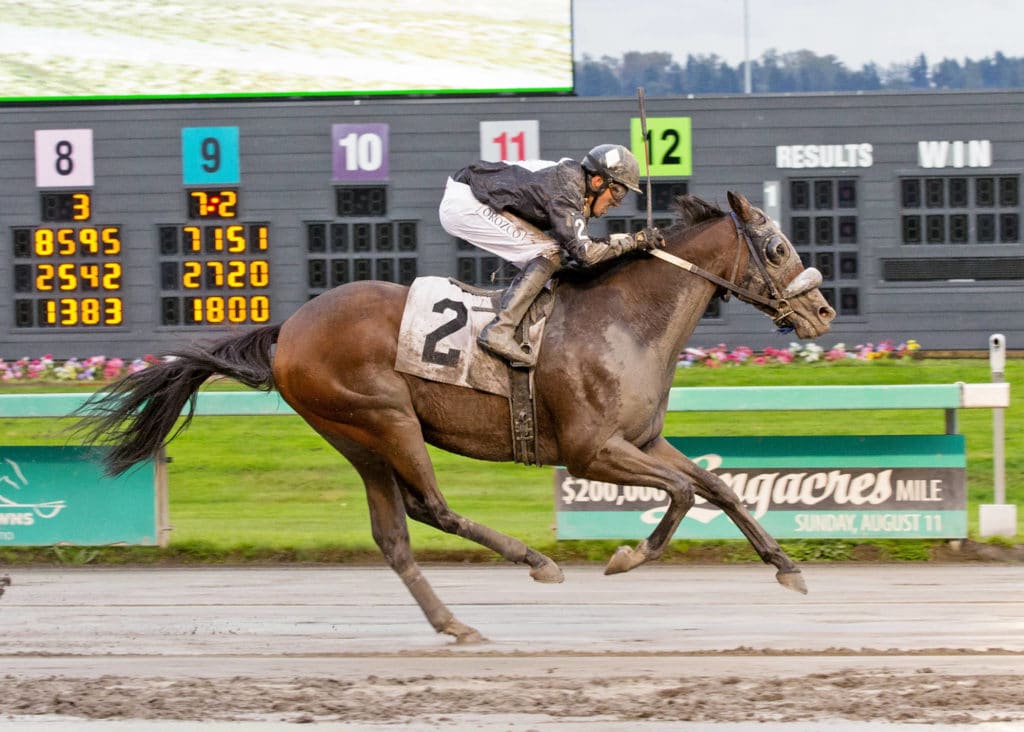 Oh Marvelous Me and Kevin Orozco

Oh Marvelous Me flew late and scored a 2 ¾-length victory in the $25,000 Pete Pedersen Overnight Stakes for 3-year-olds and up.

A classy 7-year-old gelding, Oh Marvelous Me had been winless in six previous starts this season while routinely facing the toughest horses on the grounds, including finishing runner-up to stable mate Anyportinastorm in stakes races. 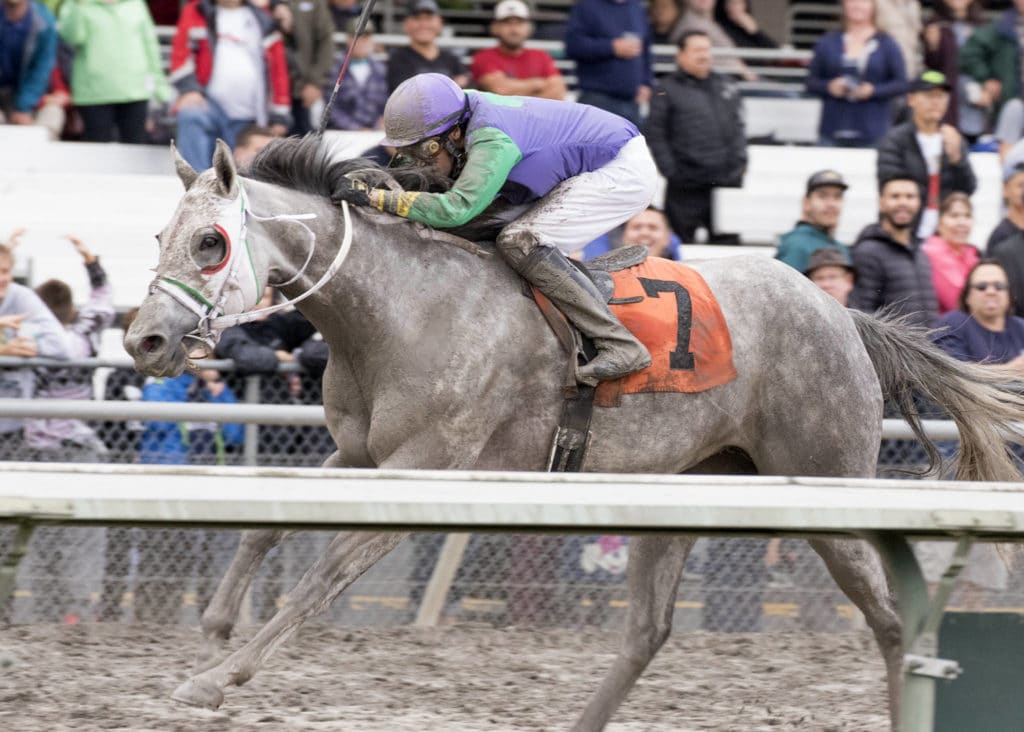 In the $25,000 Horsemen Appreciation Overnight Stakes for older fillies and mares, Paddy’s Secret rallied from far back and overtook Brilliant Bird late for a one-length victory.

Lucarelli said Paddy’s Secret would get the winter off and return to Emerald Downs as a 6-year-old in 2020.

NOTES: Lucarelli capped the season with two more winners Sunday—his 80th and 81st of the season—including the fifth win of the season by 5-year-old gelding Brahms Forest ($10.40). . .Krigger rode four winners Sunday, the eighth jockey to accomplish the feat this season at Emerald Downs. . . Longtime WTBOA General Manager Ralph Vacca served as honorary steward for the Gottstein Futurity. Vacca, who retired in 2007, was a 2013 inductee into the Washington Racing Hall of Fame. . . 2-year-old gelding Forty Smooches ($6.20) defeated winners in Sunday’s $18,200 allowance/optional claimer for 2-year-olds, running 5 ½ furlongs in 1:04.11. A Washington-bred by Munnings, Forty Smooches is the first foal out of 2014 Washington Champion 3-Year-Old Filly Find Your Spot. . .With two stakes wins Sunday, Kevin Orozco led all riders with stakes wins. . .Veteran jockey Matt Hagerty broke into the 2019 victory column, riding Silver Service to a $62.80 upset in Sunday’s fourth race. It was the second largest $2 win payoff of the season. . .4-year-old filly Foggia ($6.20) became a four-time winner at the meet for Ortiz and Bankers, scoring gate to wire under Eddie Martinez in race six. . .That’s a wrap for 2019. Live racing resumes in April with our 25th season. . .Have a wonderful winter!
–##–