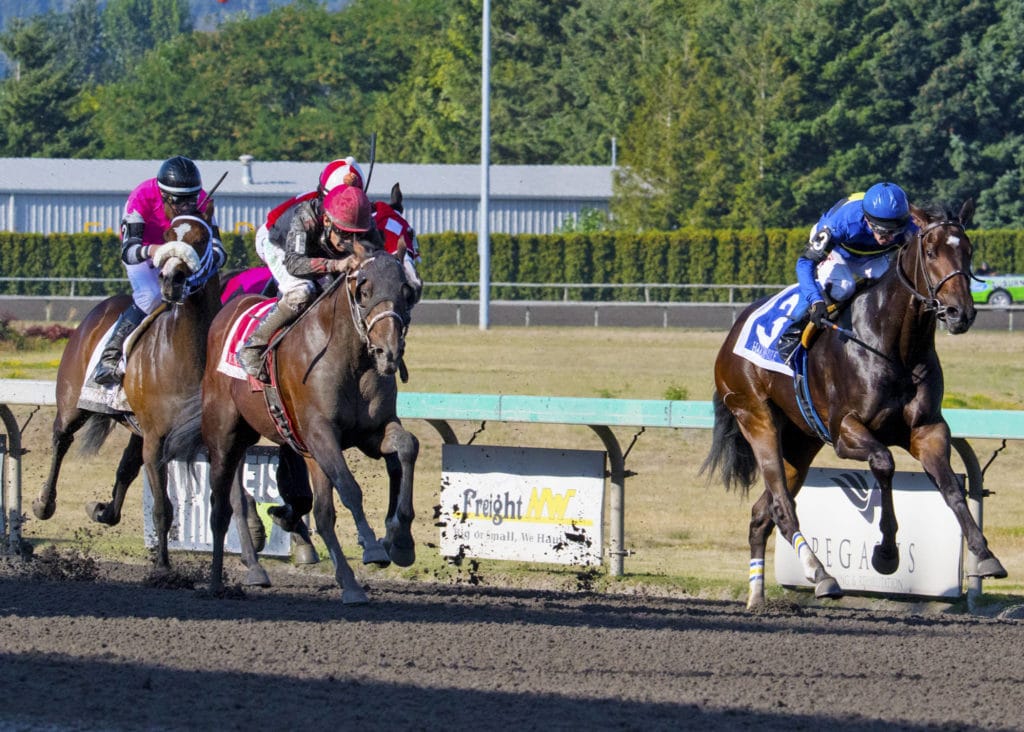 Muncey (No. 1) collars Harbors Rule (No. 3) in WTBOA Lads Stakes

AUBURN, Wash. (August 18, 2019) – Muncey and hot-riding Javier Matias wore down Harbors Rule in the final jumps for a neck victory Sunday in the $50,000 WTBOA Lads Stakes for 2-year-old colts and geldings.

The hard-earned victory capped a stakes sweep for Matias, who also rode Cakewalk to a gate to wire triumph in the $58,500 Barbara Shinpoch Stakes for 2-year-old fillies.

In an oddity, both Muncey and Cakewalk broke their maidens in stakes Sunday, although Muncey had the more arduous task.

Angled off the rail at the three-eighths pole, the bay colt had to overhaul Wilson to Lockett, Turntheclocktozero and Harbors Rule in the final furlong for the victory. Rallying in the middle of the track, Muncey ran six furlongs in 1:11.78 and paid $8.80, $5.80 and $4.40. Howard Belvoir is the trainer for Rising Star VII, a syndicate led by Vicki Potter of Auburn.

Muncey showed promise in his only previous start, rallying belatedly to finish fourth beaten just 2-¾ lengths in a maiden special weight last month. Handicappers took note of the effort, and Muncey was bet down to favoritism in Sunday’s 10-horse field.

A Kentucky-bred by Munnings, Muncey earned $22,275 for the victory. Although bred in the Bluegrass, Muncey sold for $30,000 at the 2018 WTBOA Summer Yearling Sale.

For Belvoir and Rising Star, it’s their third win in the last four Lads Stakes, following victories by Elliott Bay in 2017 and So Lucky in 2016. 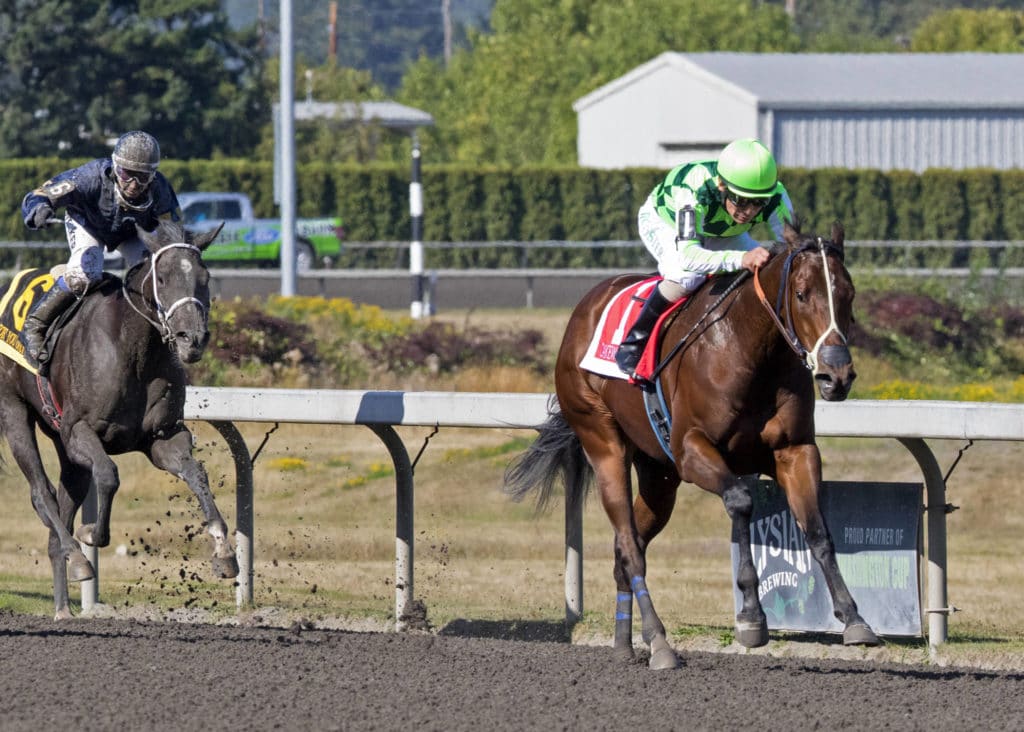 CAKEWALK ALL THE WAY IN BARBARA SHINPOCH

Cakewalk’s brief career had mainly been tough luck before Sunday. She stumbled and lost the rider in her debut at Pleasanton in June, and was beaten a nose in a maiden special weight at Sacramento last month. Sunday, however, things went smoothly.

Windy Point, ridden by Juan Gutierrez, chased the winner home and determinedly held second, returning $4.40 and $3.20. You Go Girl, ridden by Kevin Krigger, finished third and paid $3.40, while Angie C Stakes winner For You Only, finished fourth. My Fol, Tap That Spot, Munny and Jaded Tiger rounded out the order of finish.

Wright far and away is the leading stakes trainer at the meet; the Shinpoch was his eighth stakes win—six more than anybody else—and 39th all-time at Emerald Downs. Mowat has two stakes wins this season: Cakewalk and Seattle Stakes winner Mucho Amor.

NOTES: Kevin Krigger rode four winners Sunday and is three wins away from the 1,000 mark for his career. Since returning to Emerald Downs three weeks ago, Krigger already has 14 wins and joins Gary Wales and Kevin Orozco as riders with four-win days this season. . .Wales rode two winners Sunday and owns a 26-win lead–80-54–over Orozco atop the jockeys’ standings. . .Matias ranks fifth all-time in stakes wins with 34, and also moved ahead of Kevin Radke into seventh place all-time with 533 overall wins at EmD. . .Cherokee Louise ($8.20) and La Waun ($8.20) each became triple winners at the meet Sunday. . .The 2019 WTBOA Summer Yearling Sale is 2 p.m. Tuesday at the M. J. Alhadeff Sales Pavilion adjacent to Emerald Downs. . .Live racing resumes Friday with first post 6:30 p.m.
–##–