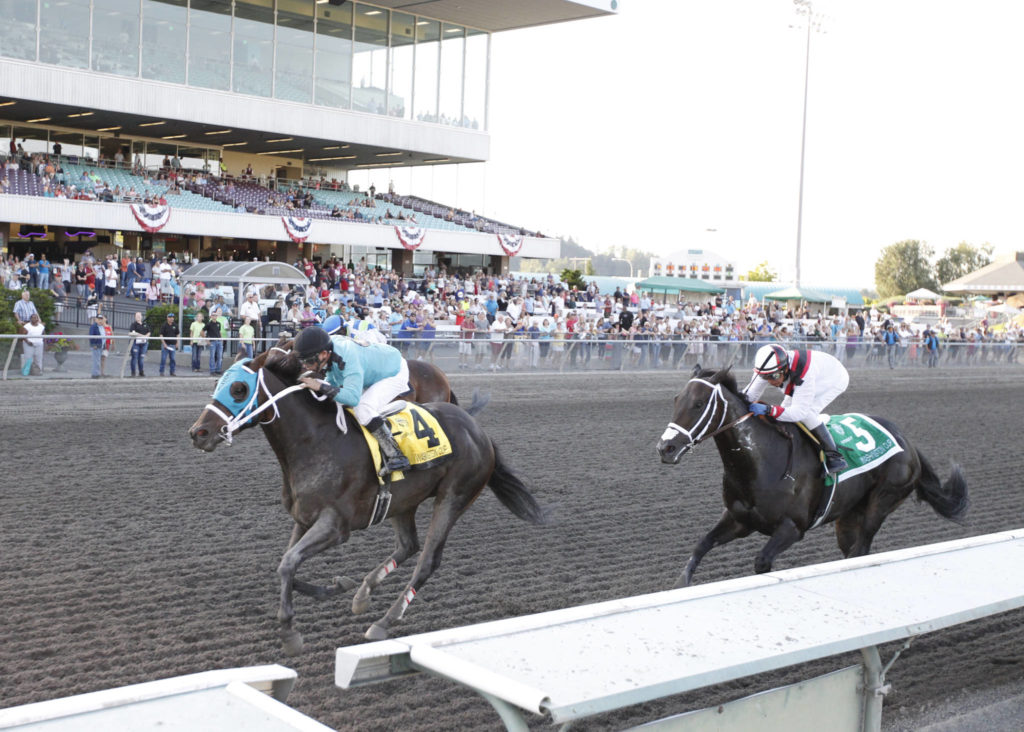 Mach One Rules (No. 4) leads to the wire

Mach One Rules took another step toward 2017 Horse of the Meeting honors by gutting out a 1 ¼-length victory over Dedicated to You in the $50,000 Muckleshoot Tribal Classic for 3-year-olds and up.

Six times previously a trainer had won two stakes in a day at Emerald Downs, most recently Howard Belvoir in 2016, but Wright is the first to win three in a day.

Mach One Rules, meanwhile, capped a sensational season with a hard-earned victory in the Muckleshoot Tribal Classic, overtaking front-runner Dedicated to You past mid-stretch and edging clear for the victory.

A 4-year-old Washington-bred gelding by Harbor the Gold-Felice the Cat, Mach One Rules is 7-7-2 in 17 career starts—including six Emerald Downs’ stakes wins—and has career earnings of $276,381.

Mach One Rules is 3-2-1 in six starts this season with a meet-high $135,250 in earnings, including $27,025 for Sunday’s win. He recorded three stakes wins—Budweiser, Mount Rainer, Muckleshoot Tribal Classic—to go with seconds in the Longacres Mile and Governor’s Stakes.

“He’s had a great year, I couldn’t be happier with Mach One Rules,” Lucarelli said.

Lucarelli and owner Roy Schaefer also credited Enriquez with helping the horse to peak this season.

“With horses, you have to get along with them and put a little psychology into it,” Enriquez said. “I love riding this horse, we get along great.”

Dedicated to You, third in the Longacres Mile, ran another solid race to finish second, holding off Mike Man’s Gold by a head for the $9,460 runner-up check.

Mike Man’s Gold had his four-race win streak snapped while finishing third, and The Press and Hit the Beach completed the order of finish.

Rocco Bowen, rider of Mike Man’s Gold, claimed foul against the winner for alleged interference on the backstretch. The stewards, however, made no change in the order of finish. 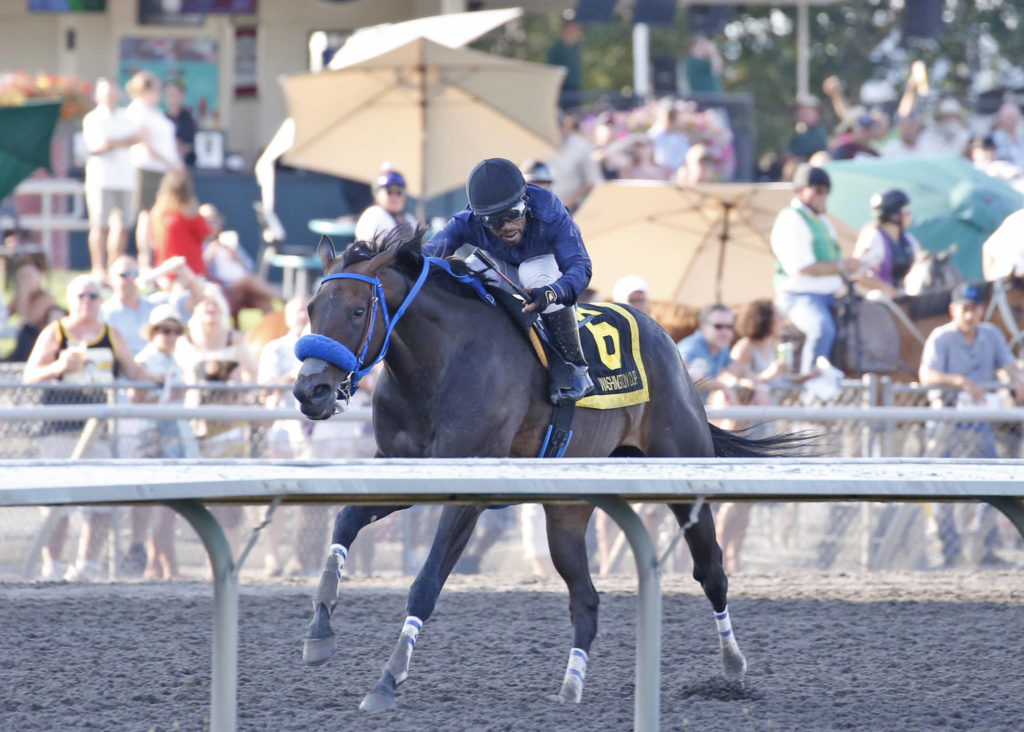 Amazingly, two of Wright’s three stakes wins Sunday were by horses he claimed this meeting.

Exit Sixty Slew, tagged for $20,000 on June 3 by Wright, Below The Rim Stable and Mediocre Racing, has two wins and third for his new connections, including Sunday’s 3 1/2-length victory over Citizen Kitty in the $50,000 Washington Cup Filly and Mare.

Ridden by Rocco Bowen, Exit Sixty Slew overtook My My Heart Goes On at the five-sixteenths pole, opened a three-length lead into the stretch, and finished the mile and one-sixteenth in 1:43.05.

Citizen Kitty, bidding for a meet-leading fourth stakes win, settled for second place Sunday. The 1-to-5 betting favorite, Citizen Kitty accounted for $182,226 of $205,850 in the show pool.

My Heart Goes On held third, followed by Dreamer S. and Sugarseeker, 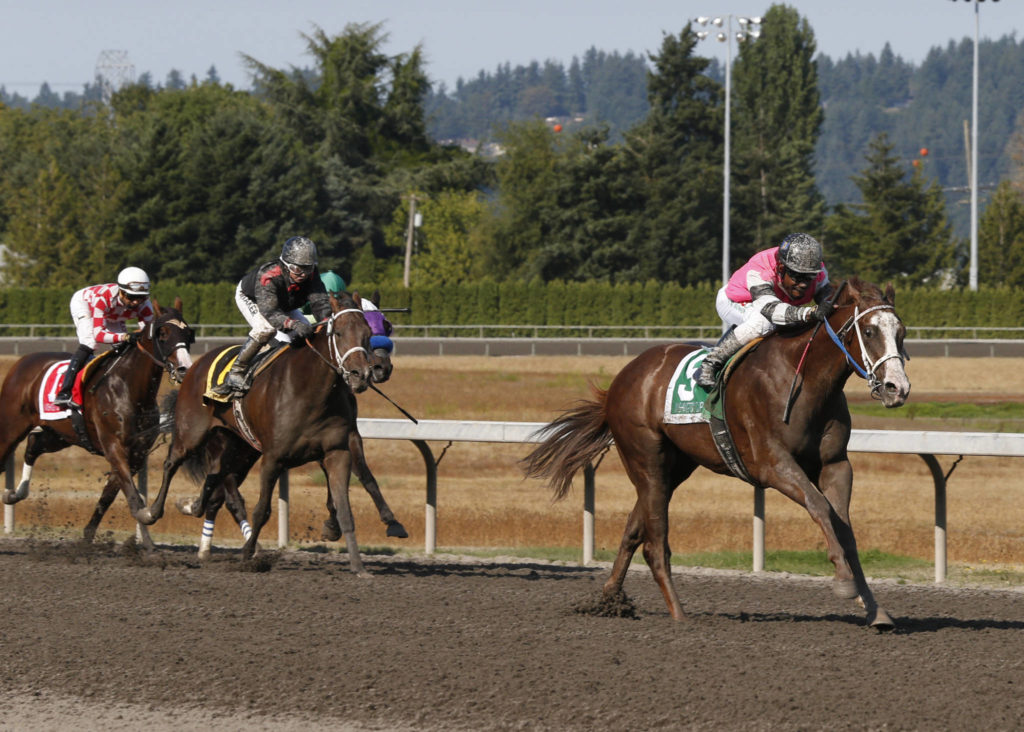 Sippin Fire exploded through the stretch and drew clear for a 5 ½-length victory over Elliott Bay in the $50,000 Washington Cup Juvenile Colts and Geldings Stakes.

The victory turned the tables on Elliott Bay, who defeated Sippin Fire in a roughly-run WTBOA Lads Stakes three weeks ago. In that one, Elliott Bay prevailed by three-quarters of a length and then withstood a stewards’ inquiry for the victory.

There was no such drama Sunday. In fifth place on the turn, Sippin Fire rallied wide into the lane and unleashed a wicked final furlong to win going away.

“He finally got a chance to run. He’d been in some traffic problems the last couple of races,” Bullock said.

By Harbor the Gold-Bahati, Sippin Fire is 2-1-0 in four starts with earnings of $47,888 for How We Roll #4. The Washington Cup was his first stakes victory, and in a bit of irony his older brothers—Couldabenthewhisky and Del Rio Harbor— were both state champions as 2-year-olds but they both lost in the Washington Cup. 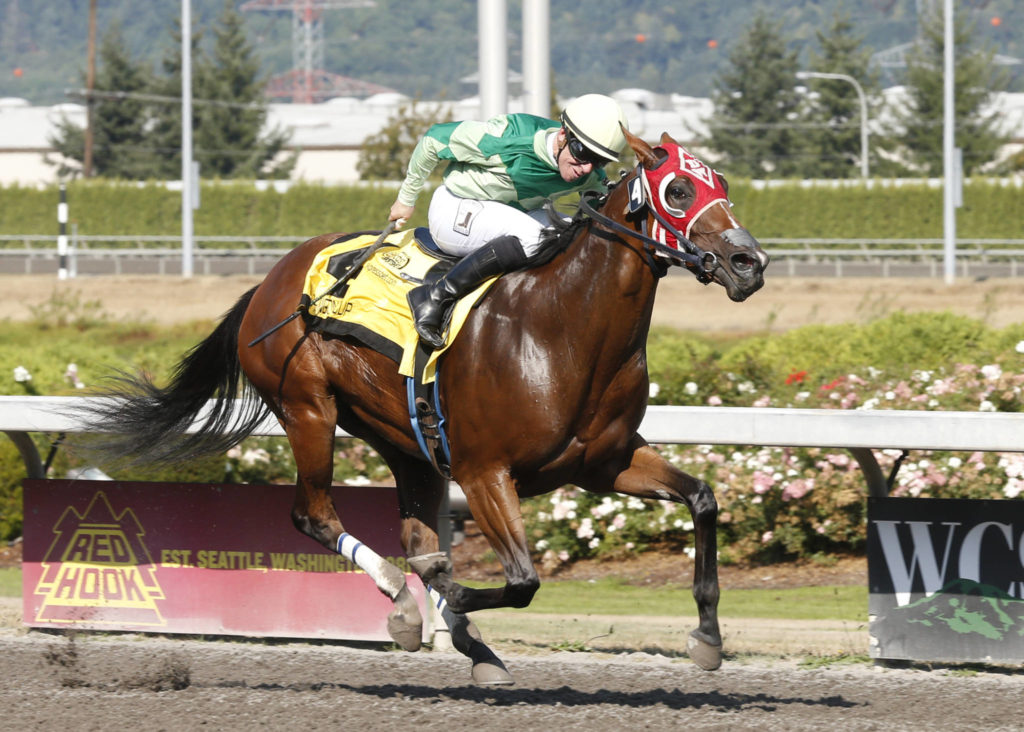 John and Janene Maryanskis Bella Mia became a triple stakes winner at the meet, racing to a one-length victory over Frisky Bear in the $50,000 Washington Cup Juvenile Filly Stakes.

Bella Mia set fractions of :22.18, :45.45 and :57.69, and was able to hold off a strong challenge by Frisky Bear through the lane for the victory. Faith Flys Again finished third, followed by A Filly Can Dream Manny’s Way, Goldie’s Darlins and Goose Prairie.

Bella Mia has reeled off victories in the Angie C Stakes, Barbara Shinpoch Stakes and the Washington Cup, and has an overall mark of 4-0-0 in five starts with earnings of $91,013.

With the victory, Bella Mia tied the track record for most wins in a season by a 2-year-old at Emerald Downs. A bay filly by Harbor the Gold-Bella Campana, Mr. And Mrs. William T. Griffin bred the winner. 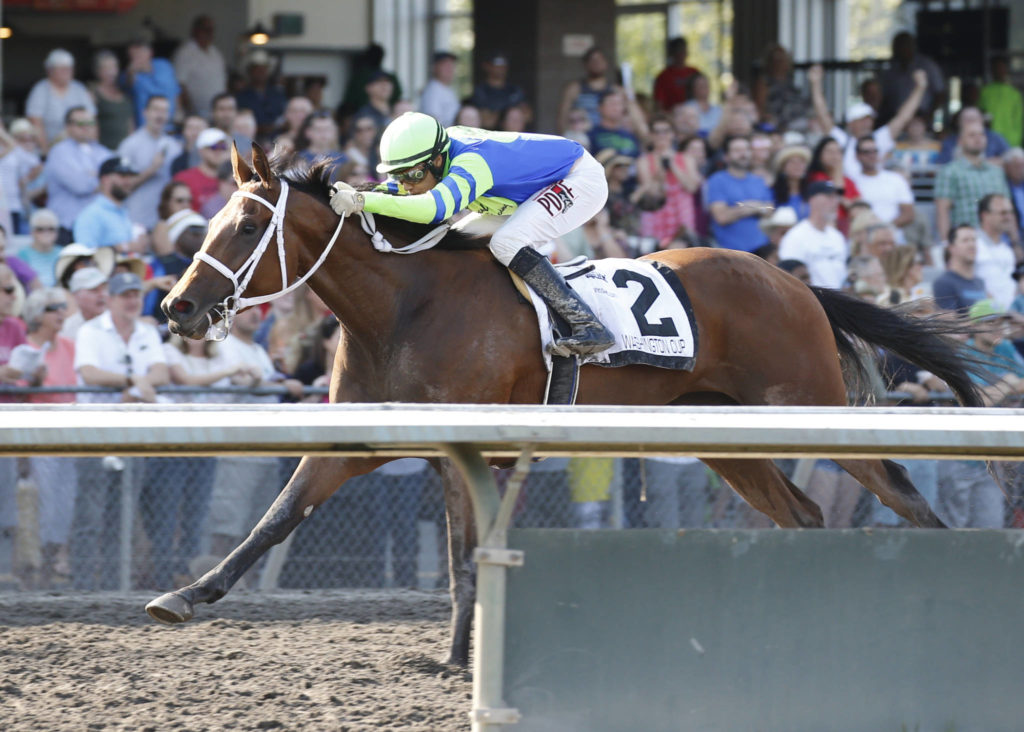 Grace Bay—only one week removed from her maiden victory—swooped past stable mate Targa into the stretch and drew clear for a 8 ¼-length victory in the $50,000 Washington Cup Sophomore Filly Stakes.

Ridden by Kevin Orozco and trained by Frank Lucarelli, Grace Bay ran one mile in 1:36.87 and paid $10.60 as fourth choice in the wagering.

It took Grace Bay nine tries to break her maiden, but she wasted no time in defeating winners. She defeated straight maidens by 5 ¼ lengths last week, and wheeled back in seven days to overpower stakes foes. She stalked Targa through six furlongs in 1:10.93, took command into the lane and widened her advantage through the stretch.

Targa, a 17-to-1 long shot ridden by Eswan Flores, held second to give trainer Frank Lucarelli a one-two finish in the race. It was a sensational effort by the Atta Boy Roy filly, who had never raced farther than six furlongs in eight previous starts.

Retreat Yourself, the 6-to-5 favorite, finished third and  was followed by No Talking Back, Miss Wine Topper and I Double Dare You.

Ron and Nina Hagen are the winning breeders. 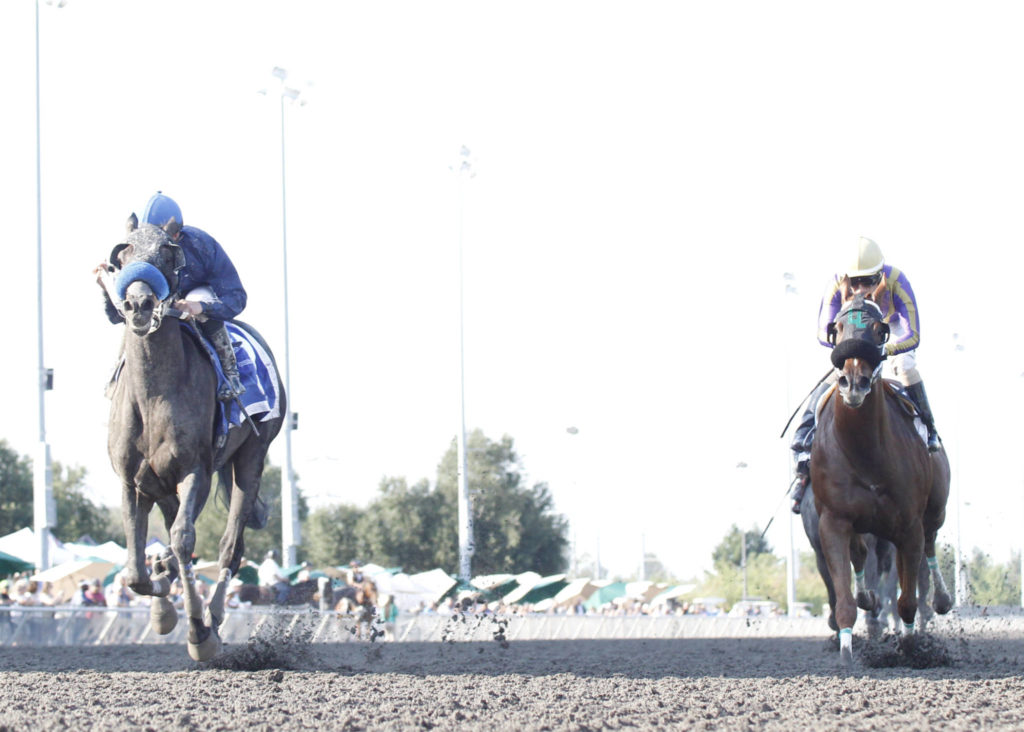 Pulpits Power wore down a resilient Keller’s Gold and edged clear for a 1 ½ -length triumph in the $50,000 Washington Cup Sophomore Stakes.

With Couton and Wright combining for their second Washington Cup victory Sunday, Pulpits Power ran one mile in 1:37.14 and paid $9.60 as third choice in the wagering.

Pulpits Power was caught behind horses turning for home, angled out into the stretch and dueled with Keller’s Gold in a great two-horse stretch battle.

“(Pulpits Power) has a great big stride, I was impressed with him today,” Couton said.

Kota Copy finished third but was disqualified and placed fifth for interference into the stretch, and Rifle Gernade was promoted from fourth to third.
Mr. And Mrs. Elwin Gibson bred Pulpits Power. 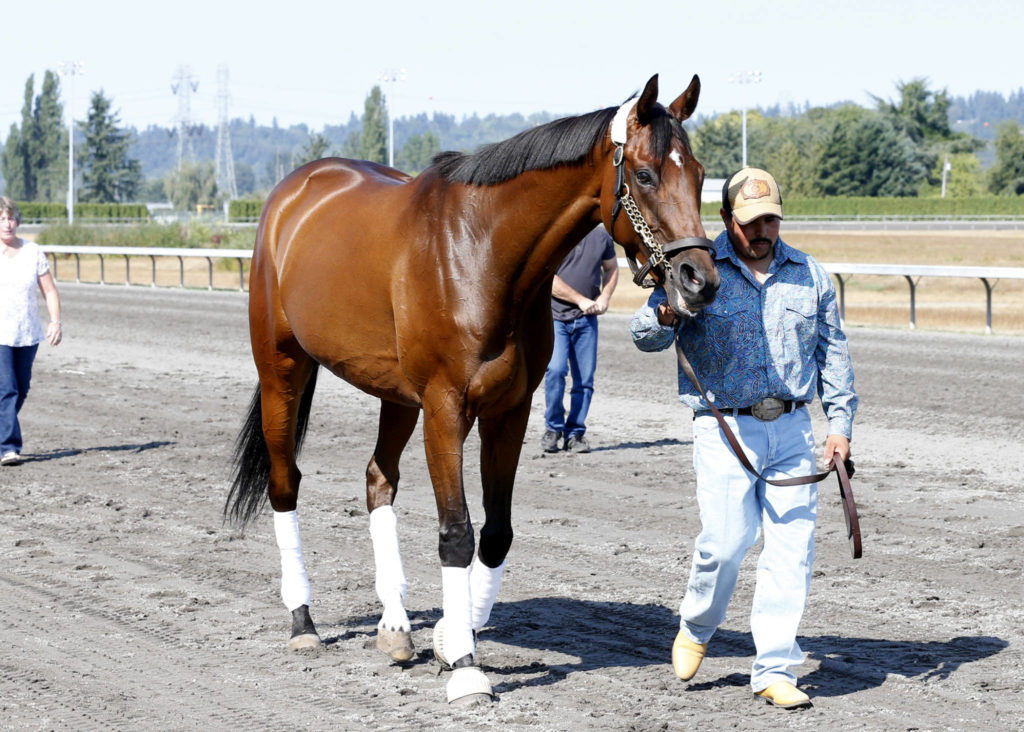 NOTES: Three-time Washington Cup winner Stryker Phd was officially retired Sunday between the third and fourth races. Winner of the 2014 and 2015 Longacres Mile, Stryker Phd is a three-time Washington Horse of the Year and earned $631,011 in a 33-race career that included nine stakes wins at Emerald Downs. With “The Final Countdown” playing over the PA system, the 8-year-old gelding took one final walk through the paddock and down the home stretch. . .Harbor the Gold’s three stakes wins Sunday increase his season total to eight, and his all-time Emerald Downs’ total to 55. . .Rocco Bowen rode four winners on the 11-race card, boosting his season total to 107 wins. . .Wright’s three wins give him 47 this season; he won last year’s title with 39 wins. . .In addition to Wright, Lucarelli, Bowen and Couton, breeders Bar C Racing and Nina Hagen also had multiple Washington Cup wins. . .In addition to Sunday’s three stakes wins, Wright also saddled the feature race winner on Friday (Kiss My Lulu) and Saturday (Oh Marvelous Me). . .Monydontspenitself, fourth in the Emerald Downs Derby, prevailed as the 1-to-5 favorite in Sunday’s $21,000 allowance race for 3-year-olds. Ridden by Javier Matias for Kay Cooper and Where We At, Monydontspenitself ($2.40) ram six furlongs in 1:09.46. .  .Live racing resumes Friday with first post 6:30 p.m.
–##–