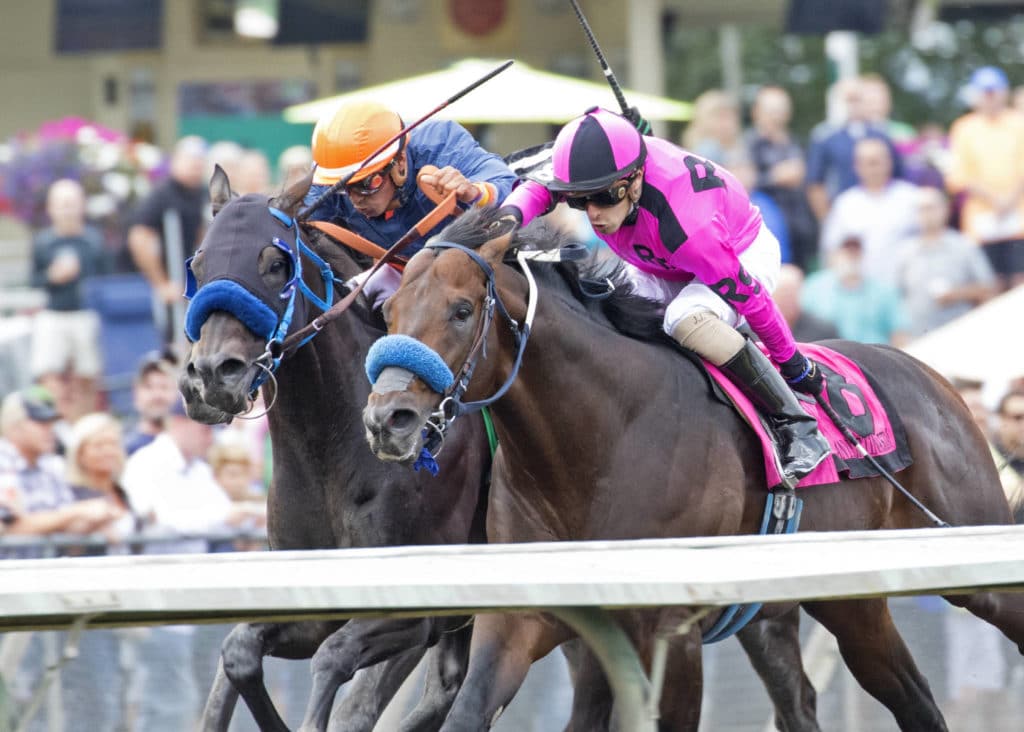 Auburn, Wash. – In one of the most scintillating stretch drives in Longacres Mile history, Law Abidin Citizen nailed 3 to 5 favorite Anyportinastorm in the final jumps and scored a head victory in the 84th renewal of the Northwest’s biggest race.

Restrainedvengence finished a neck behind Anyportinastorm in a race dominated by the top three finishers. In fact, it was 6 ½ lengths back to Solid Wager in fourth place, with Elliott Bay, Oh Marvelous Me, More Power to Him, Curlin Rules, Rocky Tough, Brave Nation and El Huerfano completing the order of finish.

The victory is the first graded win on dirt and the second graded win overall for Law Abidin Citizen, who captured the Grade 3 San Simeon Stakes on Santa’s Anita’s hillside turf course last March. A 5-year-old Kentucky-bred gelding by Twirling Candy, Law Abidin Citizen is 6-3-4 in 23 starts with earnings of $416,167 including Sunday’s check worth $96,800 check for Sunday.

Restrainedvengence, a California shipper ridden by Kevin Krigger at 120 lbs, finished strongly to take third and paid $9 to show.

For Cedillo, it was his first time riding Law Abiding Citizen in a race, although he was up for the gelding’s sharp half-mile gate work in :47 4/5 last week at Del Mar.

“When I worked him last week, I told Mark (Glatt) that the horse was gonna run good,” said Cedillo, the leading rider this year at Golden Gate Fields. “It was a tough race today, but he ran great.”
For Glatt, the trip to Emerald Downs was a homecoming. He was raised in Auburn and his father was a top trainer at Longacres.

“We were actually talking about this race last year,” Glatt said. “(Law Abidin Citizen) has been more of a turf horse, but it transferred well to dirt today.”

It’s the second Mile victory for Schneider, who won with Chum Salmon in 1985, and Agnew’s father, S.J. Agnew, won the 1971 Mile with Pitch Out.

“This is a dream come true,” Dan Agnew said.

Due to audio problems, Joe Withee was pressed into race-calling duties at the last moment and announced the Longacres Mile from track side in place of regular announcer Tom Harris. 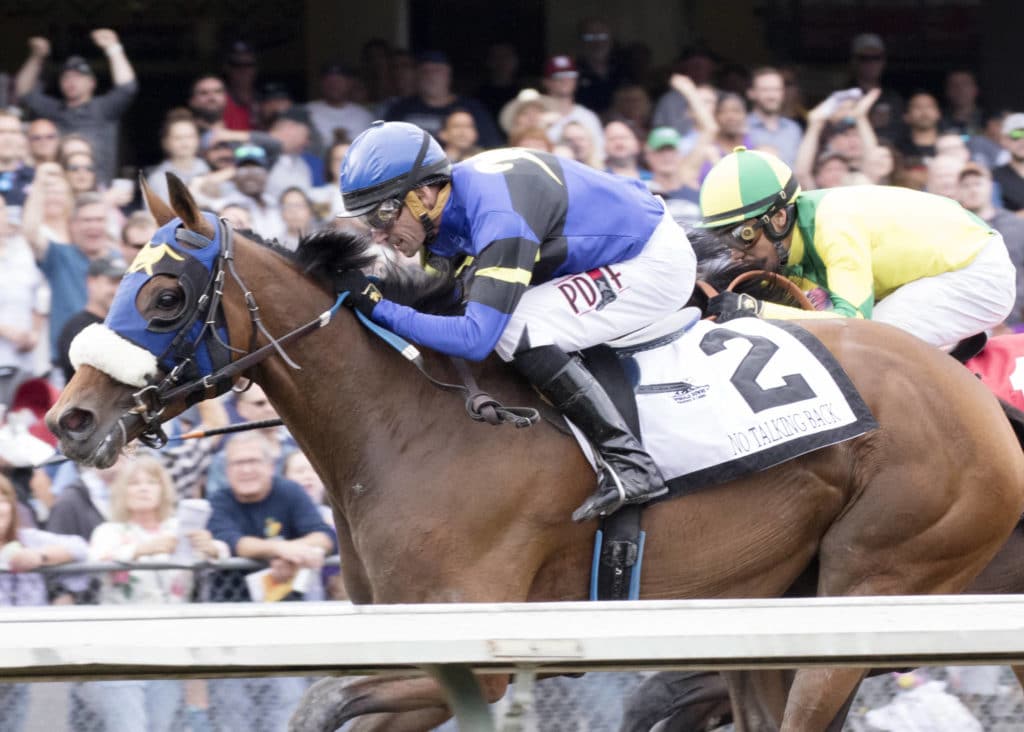 No Talking Back and Scott Stevens

NO TALKING BACK RALLIES IN EMERALD DISTAFF

In the $50,000 Emerald Distaff for older fillies and mares, No Talking Back performed an encore of her Boeing Stakes victory last month.

Patiently handled by Scott Stevens, No Talking Back rallied inside and collared a resilient Bella Mia for a one-length victory in 1:49.56 for 1 1/8 miles. The winner carried 119 lbs. and paid $10, $4.20 and $3 as co-second choice. Chris Stenslie is the winning trainer for owner/breeder Jody Peetz of Issaquah, Wash.

Now a triple stakes winner at Emerald Downs, No Talking Back likely clinched honors as the track’s Top Older Filly or Mare. A Washington-bred by Flatter-Talk to My Lawyer, her overall mark is 5-5-3 in 21 starts with earnings of $144,104, including a $25,800 check for Sunday’s win.

Blazinbeauty, ridden by Javier Matias, rallied from last to finish third and paid $3.60 to show, while Paddy’s Secret, Diamonds R, Reginella, Fly Far Away and Guardian One completed the oredr of finish.

Briefly stuck behind horses into the stretch, Stevens steered No Talking Back through an opening inside and gradually edged clear of Bella Mia in the stretch.

Stevens is two for two aboard No Talking Back with stakes victories in the Boeing Stakes and Emerald Distaff.

“I had a great trip again,” said Stevens, the 2019 recipient of the George Woolf Memorial Jockey Award. “Chris (Stenslie) had her ready, and I just had to push a button when I had the opening.” 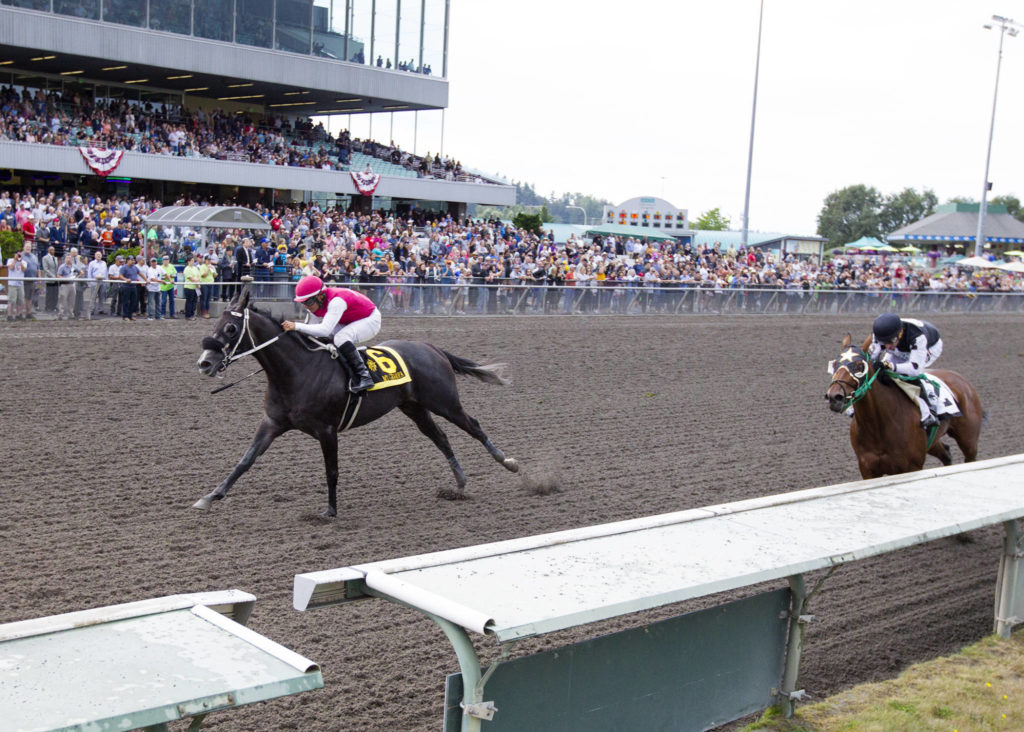 MY GRANDPA PREVAILS IN THRILLING DERBY

My Grandpa wouldn’t be denied in the $50,000 Muckleshoot Derby for 3-year-olds.
Overcoming a poor start, My Grandpa out dueled the gutsy filly Alittlelesstalk in a prolonged drive and scored by 1-¼ lengths in 1:49.71 for 1 1/8 miles.

Alittlelesstalk dug in gamely when challenged by My Grandpa at the five-sixteenths pole and yielded grudgingly in the final furlong. Ridden by Scott Stevens at 118 lbs, Alittlelesstalk paid $3.60 and $2.80.

Wenzel’s 42 stakes wins are No. 6 all-time at Emerald Downs while Crockett’s 18 stakes wins ranks No. 3 among owners.

For Carreno, it was his first Emerald Downs’ stakes victory. The veteran jockey rode My Grandpa to a third in the Seattle Slew Stakes last month at 34 to 1 odds, and said he pled with Wenzel for a return engagement in the Derby.

“Since I rode him last time, I’ve been asking Tom about riding him again,” Carreno said. “He has a tendency to break a little slow, but he’s very nice and it’s great to get a stakes win. 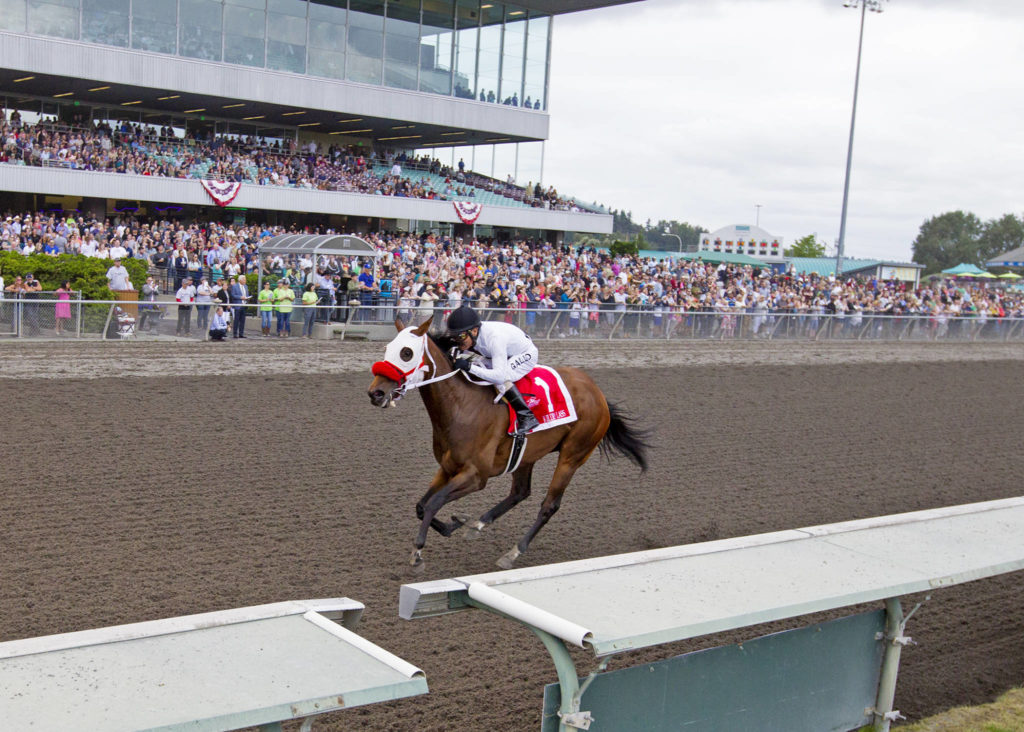 Killarney Lass made it look easy in the $50,000 Washington Oaks for 3-year-old fillies. Sprinting clear early and well rated by jockey Javier Matias, the Eskenderaya filly powered home for a 9 ¼-length victory over Twirling Devon in 1:48.55 for 1 1/8 miles.

Third choice in the wagering, Killarney Lass carried 121 lbs. and paid $10, $6 and $4.20. Frank Lucarelli is the trainer for owner Dan Sargent of Edgewood, Wash.

Coming off an 18 ¼-length blowout vs. allowance sprinters, Killarney Lass was more than up to the nine-furlong distance on Sunday. Breaking form the No. 1 post, she maintained a short lead over Suddenly Awesome while setting fractions fractions of :23.54, :47.23 and 1:11.54. She opened up on the field into the stretch and drew off to win with complete authority, just missing the Oaks record for largest winning margin of 9 ½ lengths set 20 years ago by Flirtacious Girl.

“She’s bred for (distance), and we’ve always wanted to get her stretched out,” Lucarelli said. “She ran great today.”

Lucarelli scored one of his first major wins as a trainer with Nifty Misty Dawn in the 1988 Washington Oaks at Longacres.

Twirling Devon, with Kevin Orozco riding, rallied from last to finish second and paid $4.60 and $2.80. A Twirling Candy filly owned by Tim Bankers and trained by Manny Ortiz, Twirling Devon was coming off a victory in the Irish Day Stakes, ands with the 3-year-old filly division producing four different winners in as many races, is a contender for the meet’s Top 3-Year-Old Filly.

Mucho Amor, the 3 to 5 favorite, hesitated at the break, advanced to third on the backstretch, but gave way in the lane and finished last. Owned by Ten Broeck Farm, Mucho Amor had finished first, second and second in the first three legs of the sophomore filly series. 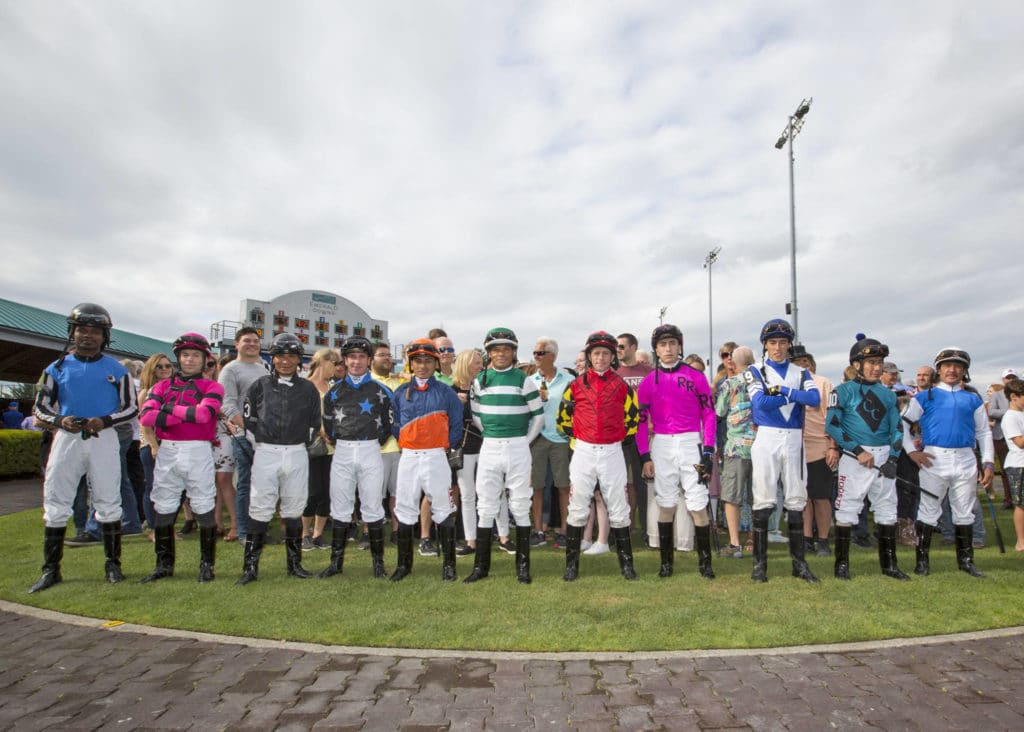