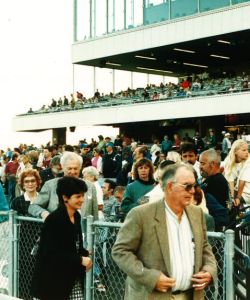 AUBURN, Wash. (February 22) – Jim Penney, a charter member of the Washington Racing Hall of Fame who saddled a record five Longacres Mile winners, died Tuesday at his home in Edgewood.

Penney, who ranked at or near the top of every major training category at Emerald Downs, Longacres and Yakima Meadows, was 82 years old.

According to son-in-law Bryson Cooper, Penney had been in ill health for several months before his situation deteriorated rapidly in recent days. Penney, who wore a pacemaker and was diabetic, had had been in and out of hospice care.

As a jockey, Cooper notched his biggest win aboard Theologist for his father-in-law in the 1977 Longacres Mile.

“He left no stone unturned,” Cooper said. “He was on top of every little problem, knew everything about all of his horses.

“He was more than a trainer,” Cooper added. “Jim was involved with the sport and cared about it, serving as president of the HBPA, and he was respected by his peers.”

Penney began training in 1957 and won 2,154 races and nearly $20 million in purses. In addition to Theologist, Penney won the Longacres Mile with Silver Mallet (1973), Edneator (2000), Sabertooth (2002) and Flamethrowintexan (2006). A Homestretch Farms homebred, Edneator raced gate-to-wire under Gallyn Mitchell and paid a then record $85.20 to win. 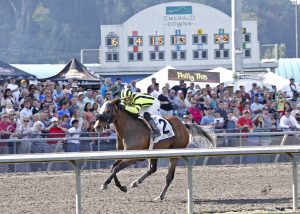 In 2012, the Penney-trained Class Included won four stakes and became only the second filly or mare to win Horse of the Meeting at Emerald Downs. In 2014, homebred I Keep Saying set a world record of 1:12.94 for 6 ½ furlongs, breaking the mark previously set by Sabertooth in 2005.

Preceded in death by wife Betty, Penney is survived by daughters Kay Cooper and Jill Fabulich. Per his wishes, Penney’s body will be cremated and the family will meet to discuss plans for a service.

Kay Cooper, who has served as her father’s longtime assistant trainer, will continue to train the barn’s stable of horses at Emerald Downs and at their nearby farm in Edgewood.