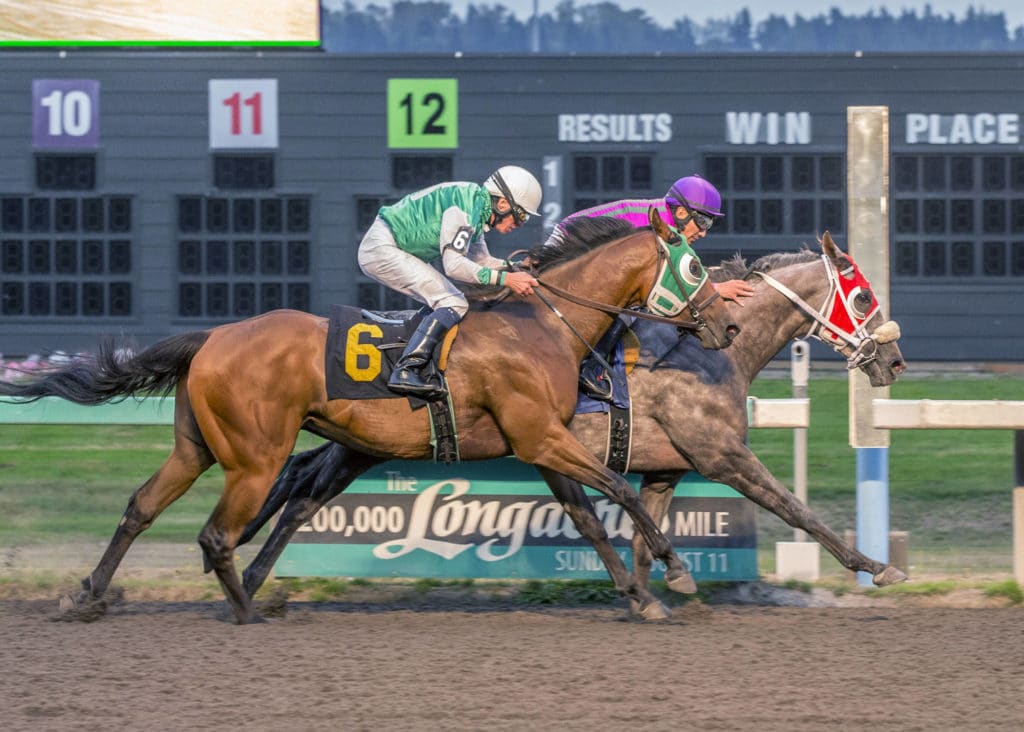 Lucarelli swept the first five races on an eight-race card while breaking the single-season record for most wins at Emerald Downs with 67.

Gentle Prince and jockey Javier Matias capped the remarkable run with a narrow victory in race five, giving Lucarelli his 67th victory in 60 days and eclipsing the mark of 66 wins set by Tim McCanna in 2008 and Jeff Metz in 2015.

The five straight wins are a track record for one card, and also tied the track and state record for most wins by a trainer in a day.

The tracks’ all-time leader in wins and earnings, Lucarelli recently became the first trainer to win 1,000 races at Emerald Downs and has virtually clinched his sixth training title.

Lucarelli, however, was not on hand to witness the record-breaking night. He was en route back from Vancouver, B.C., where he saddled Washington Oaks winner Killarney Lass to an eighth-place finish in the $100,000 B.C. Oaks at Hastings Racecourse. Attempting to earn a $25,000 bonus for a sweep of the Washington Oaks and B.C. Oaks, Killarney Lass showed early speed before fading as Amazonian rallied for a $24 upset over the bullring.

Lucarelli also had runners in races 6, 7 and 8 and almost bagged a sixth win, but This Great Nation edged Lucarelli’s No Harbor in Sight in the $16,600 Muckleshoot Casino Purse for 3-year-olds. Lucarelli added another second in the nightcap with That Dog Will Hunt, who chased 1 to 5 favorite Zippin Wine from gate to wire, and Lucarelli finished the night with a 5-2-1 mark in nine starts.

Old School Ike and Crest Drive are owned by Chad Christensen, who also is on pace for a single-season record for wins at Emerald Downs. Swag Stables with 27 wins in 2009 owns the record for most wins by an owner, with Christensen next at 26. Christensen needs two wins over the final seven days for the record. 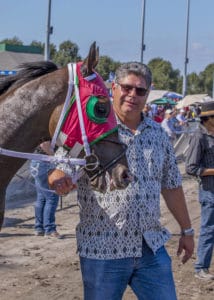 NOTES: Upset winner of the 2018 WTBOA Lads Stakes, This Great Nation ($8.80) has won two straight for trainer Jorge Rosales and owner Art McFadden, and Rosales and jockey Eddie Martinez are a combined 20 for 62 at the meeting. . .Gary Wales and Javier Matias dominated action with three wins apiece Saturday. Wales tops the standings with 93 wins while Matias is third with 52 wins; both are winning at over 22 percent for the season. . . In the $250,000 B.C Derby, Five Star General ($5.90) and Mario Gutierrez prevailed by a nose over Explode, giving North American Thoroughbred Horse Company a Derby/Oaks sweep. . .North American Thoroughbred Horse Company (Glen Todd) added a third stakes wins as He’s the Reason ($5.40) led coast to coast in the S.W. Randall Plate Handicap for 3-year-olds and up. Emerald Downs’ shipper More Power to Him finished fourth under Kevin Orozco for trainer Kay Cooper. . .Live racing continues Sunday with a Washington Cup doubleheader featuring the $50,000 Juvenile Colt & Gelding Presented by Elysian Brewing Company and $50,000 Juvenile Filly Presented by Pegasus Training and Rehabilitation. First post 2 p.m.
–##–