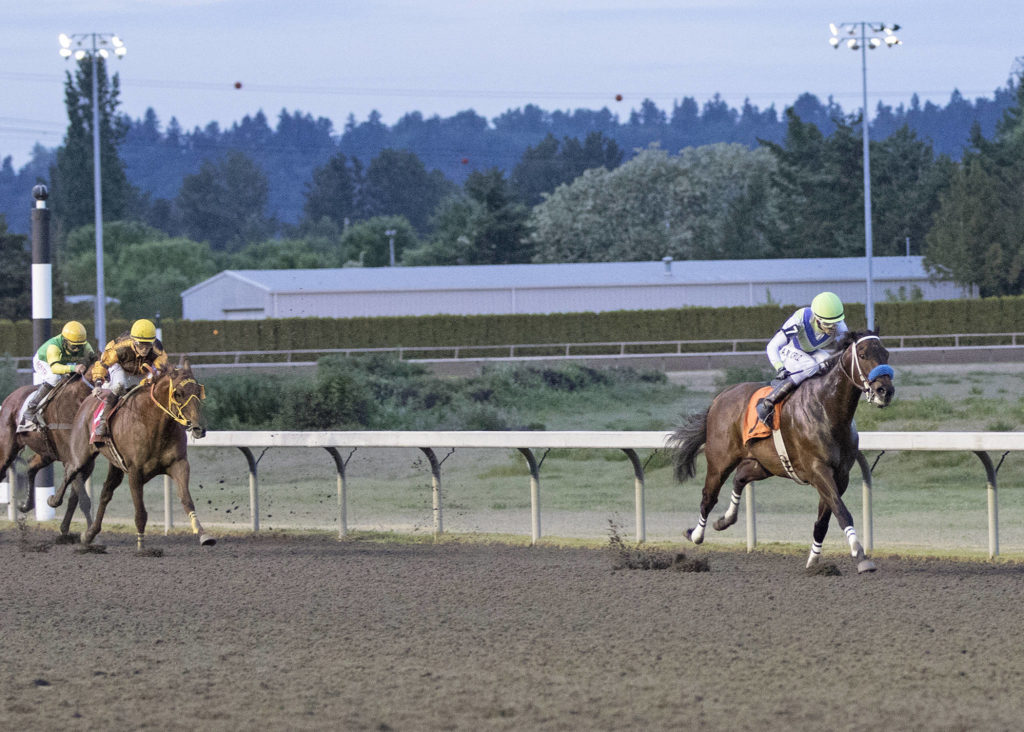 All American Hero and Alex Cruz power to victory.

ALL AMERICAN HERO ALL THE WAY AT EMERALD DOWNS

AUBURN, Wash. (May 26, 2021) – All American Hero used his early speed to good advantage Wednesday night at Emerald Downs, sprinting to an early lead and drawing clear for a 4 ¾-length victory in the $15,000 Muckleshoot Casino Purse for 3-year-olds and up.

Ridden by Alex Cruz, All American Hero ran 5 ½ furlongs in 1:02.81 and paid $11.40 as the fourth choice in the wagering. Joe Toye, saddling his second winner Wednesday, is the winning trainer for owner Bill Jensen.

With the victory, Cruz extended his streak of consecutive winning days to 28 dating to last year and within two of Kevin Radke’s track record.

Candy Zip, ridden by Connie Doll, rallied inside to finish second while Wine At Nine, with Javier Matias aboard, finished third. Maius, Legitimate Cause and Silver Fury completed the order of finish; Norski was scratched.

In a $20,900 allowance/optional claimer for 3-year-olds, Coastal Jazz led all the way for a 2 ¾-length victory in 1:04.04 for 5 ½ furlongs. With Juan Gutierrez riding for trainer Steve Bullock and Gold Coast Racing, Coastal Jazz earned $11,495 and paid $24.80 as the longest price in the field of five. Gordon Anthony, Big Endeavor, John’s On Point and One Keene Kat completed the order of finish.

NOTES: Juan Gutierrez rode three winners Thursday—numbers 1,427, 1,428 and 1,429 for Emerald Downs’ all-time leading rider. . .Julien Couton rode two winners and tops the standings with eight wins through the first three days of the meeting. . .Toye tops the trainers’ standings with four wins. . .The $0.50 pentefecta in race eight paid$2,187.20. . .Including a win by Rough Ride ($11.60) in the eighth race, jockey Jennifer Whitaker and trainer Howard Belvoir have combined for 372 wins at Emerald Downs. . .All About Time ($4.60) in race one was the lone winning favorite. . .Live racing continues Thursday at 6 p.m. and features a $5,877 carryover in the $0.20 Jackpot Pick Six.
–##–