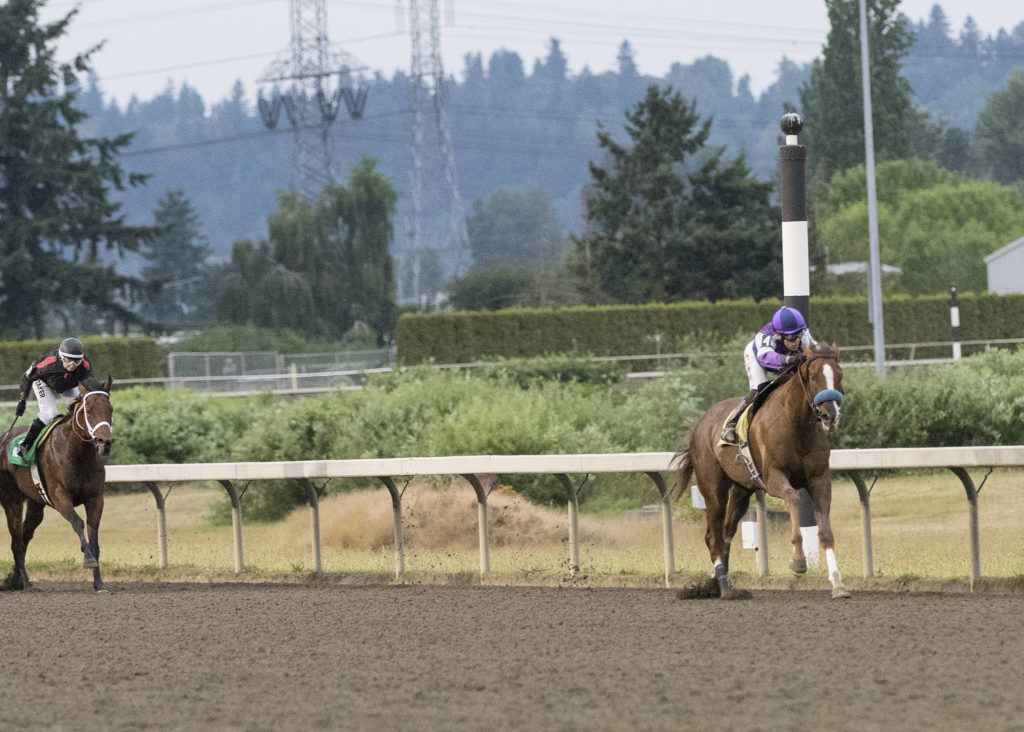 AUBURN, Wash. (June 30, 2021) – Windribbon delivered an explosive stretch run and scored a 6 ¾-length victory over Collusionist in the $20,900 Red Hook Brewery Purse for 3-year-olds and up Wednesday at Emerald Downs.

With Juan Gutierrez riding his fifth winner on the card, Windribbon zipped six furlongs in a meet-best 1:07.53 and paid $11 as third choice in the wagering. Blaine Wright is the winning trainer for owner Seamist Racing LLC (Michael Dadasovich, Lafayette, Calif.)

Windribbon’s winning time eclipsed a 1:07.71 clocking by Papa’s Golden Boy in the Budweiser Stakes two weeks ago, a race in which Windribbon was scratched at the starting gate.

In second place as Dutton set fractions of :21.46 and :43.62, Windribbon overtook the 2020 Horse of the Meeting into the stretch and powered home for the decisive victory. A 5-year-old California-bred gelding by Sway Away, Windribbon is 3-2-1 in six starts at Emerald Downs and 4-2-2 in 12 starts overall with earnings of $71,145.

Collusionist, longest shot on the board at 20 to 1, rallied under Javier Matias to finish second, while Oh Marvelous Me, ridden by Julien Couton, finished third.

Scratched after a gate mishap before the Auburn Stakes 10 days ago, 3-year-old Dutton broke alertly from the starting gate and rocketed to the early lead but gave way to the winner into the lane and finished fourth. Wheel Rally, Take Charge Deputy and Catfish Hunter rounded out the order of finish.

NOTES: Cobra Jet ($6.20) and Cadillac Margarita ($5.40) gave Washington-breds a sweep of the season’s first races for 2-year-old. Cobra Jet (Curtin to Mischief-Atta Gal Val) romped by 6 ¾ lengths in the $20,350 maiden special weight for colts and geldings, running 4 ½ furlongs in :51.04. Cadillac Margarita (Stay Thirsty-Special Holiday) scored by 3 ¾ lengths in the $20,350 maiden special weight for 2-year-old fillies, running 4 ½ furlongs in :51.79. . .Juan Gutierrez rode both 2-year-old winners and scored his other three wins on Oreo’s Dream ($4.80), Juspassinthru ($5.60) and Windribbon. . .In his other two mounts Gutierrez finished fourth on Candy Zip and fifth on Whynotgeorgia. . .Alex Cruz rode two winners, extending his consecutive days winning streak to 39. . .Cruz leads Julien Couton 29-25 in the jockeys’ race, with Gutierrez third with 19 wins. . .Blaine Wright led the trainers with two wins Wednesday. . .Total mutuel handle on the eight-race card was $1,064,927. . .12-year-old Doctor Bruce S. showed some spark while finishing second to Melchior ($11.40) in the Wednesday opener. It was the first in the money finish this year for the veteran gelding. . .Live racing continues Thursday with first post 6 p.m.
–##–