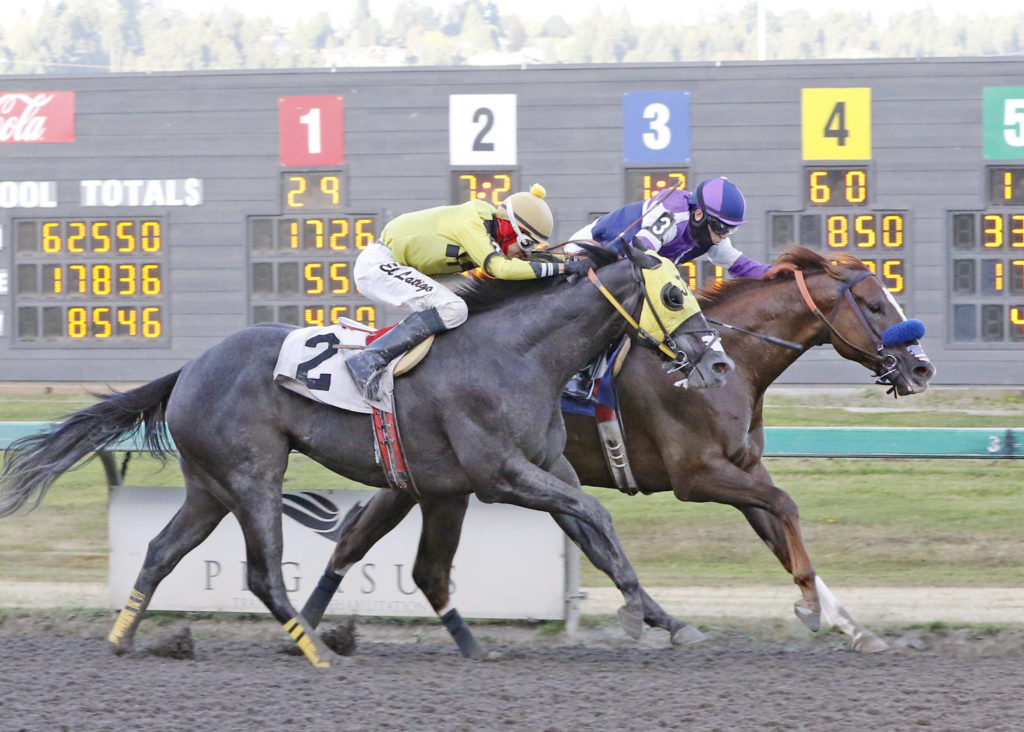 Windribbon (No. 3) holds off La Waun in the Muckleshoot Casino Purse

AUBURN, Wash. (August 26, 2020) – Windribbon used his dazzling speed and scored a front-running victory in the $19,000 Muckleshoot Casino Purse for 3-year-olds and up Wednesday at Emerald Downs.

Ridden by Juan Gutierrez, Windribbon held off a surging La Waun to prevail by a head in 1:09.31 for six furlongs and paid $3 as the odds-on choice. Blaine Wright—notching his third win on the card—is the trainer for owner/breeder Seamist Racing.

A 4-year-old by Sway Away, Windribbon improved to 3-0-1 in eight lifetime starts with earnings of $47,980. In his previous start, the California-bred gelding ran the fastest 5 ½ furlongs of the meet, 1:02.11, while rolling to a commanding 12 ½-length victory.

Wednesday’s victory was not as easy, but Windribbon got the job done against vastly superior competition. Dueling with Fuzzy Dolphin through a half-mile in :44.59, Windribbon shook clear into the lane, was 1 ½ lengths clear past midstretch, and held off an onrushing La Waun for the victory.

La Waun, bidding for a third straight victory, was off slow from the starting gate, but recovered nicely and was gaining late on the winner. The 5-year-old gelding is 5-4-0 in 11 career starts at Emerald Downs.

Grinder Sparksaglo, a 9-year-old making his 64th career start, rallied late for third and pushed his career bankroll over the $260,000 mark. Fuzzy Dolphin, Sky Confidential, Bullet Drill and Hollywood as Usual rounded out the order of finish.

NOTES: The victory on Windribbon was No. 1,400 for Gutierrez at Emerald Downs, and he is 20 wins away from breaking the all-time record of 1,419 wins set by Gallyn Mitchell. . .Dragon Lady ($4.40) and Aqua Frio ($6.80) also notched wins for the Wright barn Wednesday. A 6-year-old by Uncle Mo, Aqua Frio won the 2017 Seattle Slew Stakes and was runner-up to stablemate Riser in the Muckleshoot Derby. . .James Wooten Jr. has ridden two winners at the meeting, Sassy Edie at 37 to1 on July 30 and Preachinatdinner at 38 to 1 in Wednesday’s seventh race. The latter gave trainer Kenneth Stubblefield his first Emerald Downs victory. . .Jockey Cerapio Figueroa and trainer Jorge Rosales teamed for two more wins and have combined for 15 wins at the meeting. . .Live racing continues Thursday with the $40,000 WTBOA Lads Stakes for 2-year-old colts and geldings and $40,000 Barbara Shinpoch Stakes for 2-year-old fillies. First post 5 p.m.
–##–