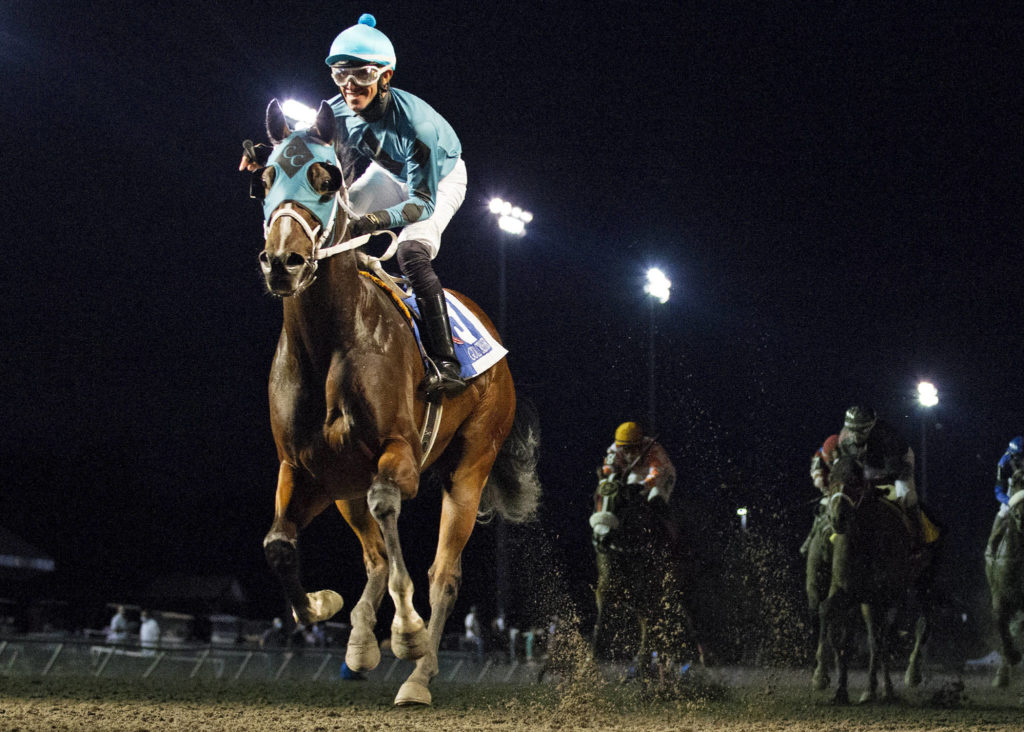 Gold Crusher and Eddie Martinez score in the Muckleshoot Derby

GOLD CRUSHER ALL THE WAY IN MUCKLESHOOT DERBY

AUBURN, Wash. (Sept. 3, 2020) – Gold Crusher used his speed to great advantage Thursday evening at Emerald Downs, opening a long early lead and holding off 6 to 5 favorite Unmachable for a 4¾-length victory in the $40,000 Muckleshoot Derby for 3-year-olds.

Ridden by Eddie Martinez at 123 lbs, Gold Crusher ran a mile and one-sixteenth in 1:41.63 and paid $14.40 as third choice in the wagering. The victory turned the tables on Unmachable, who edged Gold Crusher in the Seattle Slew Stakes last month.

Trained by Frank Lucarelli and owned by Chad Christensen and Josh McKee, Gold Crusher earned $22,000 for the victory and is 3-1-0 in seven career starts with overall earnings of $51,275. A 3-year-old Washington-bred by Harbor the Gold-Brookie Girl, Gold Crusher is the younger brother of Papa’s Golden Boy, expected to be a contender in the $100,000 Longacres Mile next week.

Lucarelli, Christensen and McKee have teamed for four stakes wins at the meet —two with Time for Gold and one each with Gold Crusher and Elliott Bay, the latter being the top local hope in the Longacres Mile.

Gunned to the lead by Martinez, Gold Crusher established a clear lead into the first turn, set fractions of :23.12, :46.55 and 1:10.15, kicked five lengths clear into the stretch and the outcome was never in doubt.

“Eddie (Martinez) made a good choice to go on with it tonight,” Lucarelli said. “I actually was excited to get (Gold Crusher) stretched out, and speed is doing pretty good here right now.”

Unmachable, with Javier Matias riding at 123 lbs, rallied from last in the nine-horse field to snatch second place. A Washington-bred by Macho Uno-Point of Reference, the runner-up earned $8,000 and is 2-2-2 in six career starts with earnings of $79,065. The gelding already has two stakes wins and three stakes placings in his brief career for trainer Jack McCartney and owner Tawnja Elison. 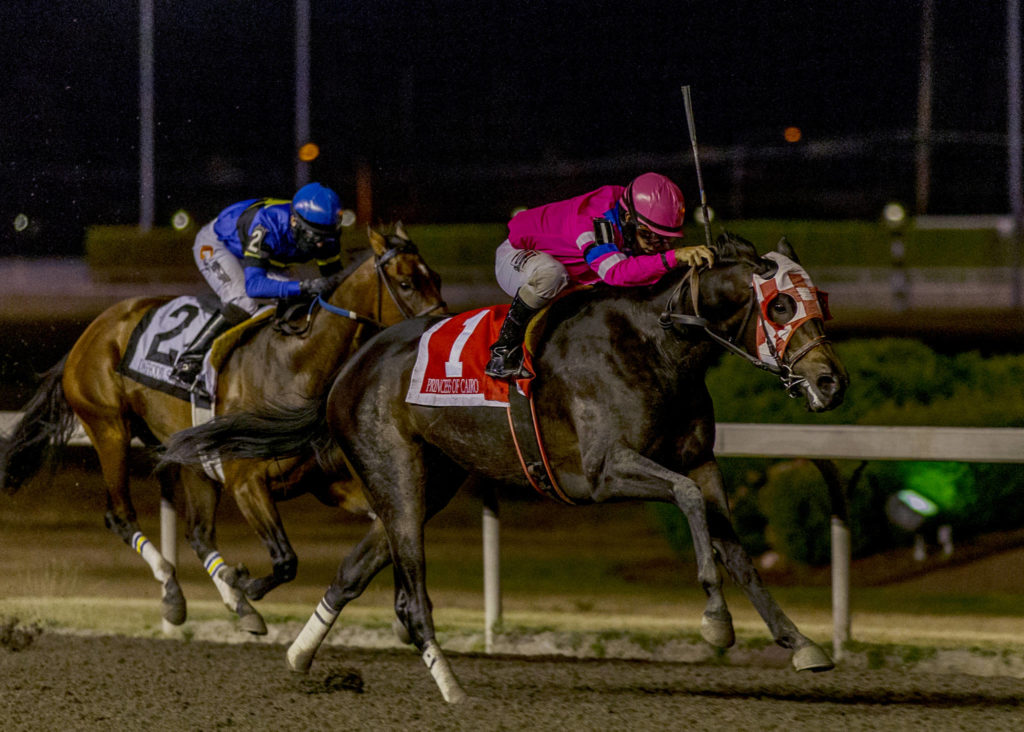 Princess of Cairo and Gary Wales prevail in the Washington Oaks

In the $40,000 Washington Oaks, Princess of Cairo wore down previously unbeaten Daffodil Sweet and edged clear for a 2¾-length victory in the meet’s top race for 3-year-old fillies.

A Canadian shipper coming off a third in a route stakes in Vancouver, B.C., Princess of Cairo ran a mile and a sixteenth in 1:41.12—nearly three ticks faster than colts in the Muckleshoot Derby—and paid $11.40 as second choice in the wagering. Gary Wales rode the winner at 121 lbs for trainer Glen Todd and owners Mark Dedomenico and North American Thoroughbred Horse Company.

A Kentucky-bred by Cairo Prince-Lovely Cool, Princess of Cairo earned $22,000 to boost her bankroll to $32,250. Her overall mark is 2-0-2 from four starts, including a troubled third in the Hong Kong Jockey Club last month at Hastings Racecourse.

Daffodil Sweet, the 1 to 5 favorite ridden by Juan Gutierrez, held second by 12¼ lengths and is now 3-1-0 in four career starts with earnings of $50,590. Daffodil Sweet was dominant in her previous three starts, including a six-length victory in the Coca-Cola Stakes four weeks ago.

Autumn Arrives finished third and was followed by Windy Point, She Owns the Paynt and For You Only. Discreet Demons and Alotmoreaction were scratched earlier in the day.