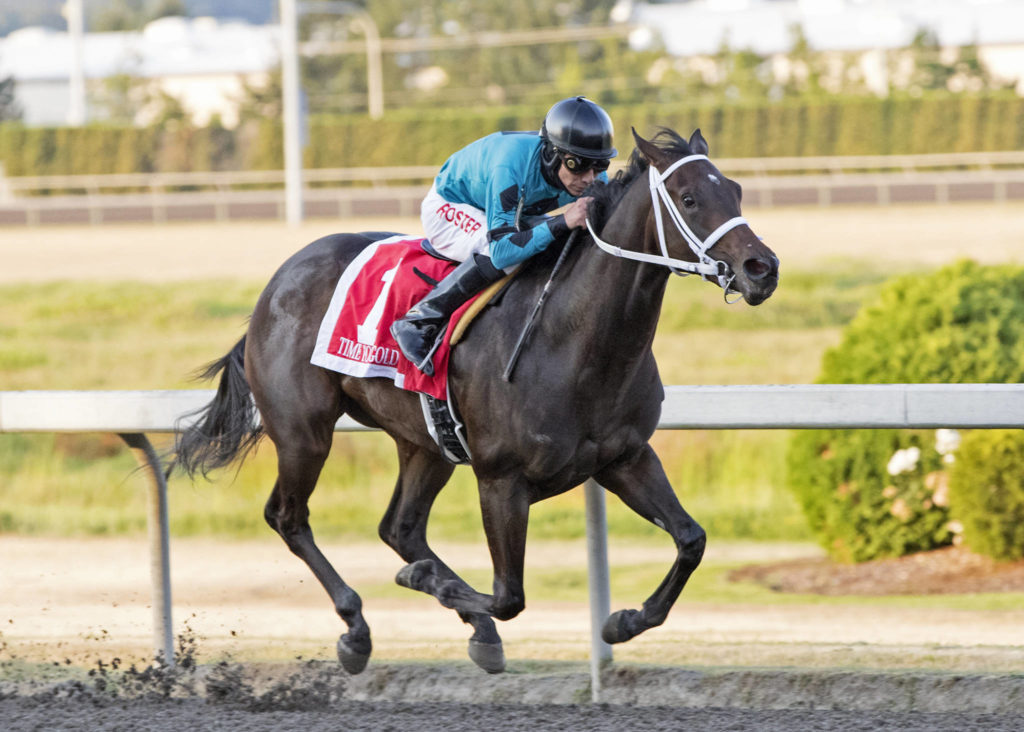 Time for Gold and Javier Matias dominate the Angie C

Both winners were maiden second-time starters and both produced big win mutuels.

In the Angie C, Time for Gold shook off 1 to 2 Canadian invader Anothersunnyday into the stretch and powered home for a nine-length victory over stablemate Managingbrianna in 1:02.72 for 5 ½ furlongs. The winning time equaled the stakes record set by Karula in 2016.

Ridden by Javier Matias at 121 lbs, Time for Gold returned $27.40 as fifth choice in the wagering. Frank Lucarelli is the winning trainer for owners Chad Christensen and Josh McKee.

“I expected a good out from her, but I didn’t know if she could win,” said Lucarelli, No. 3 all-time with 49 stakes wins at Emerald Downs. “She surprised me.”

Managingbrianna, also trained by Lucarelli, finished a clear second while first-time starter La Panzanella rallied from last to finish third. In the Vault, Lets Declare Peace, Sweet Katie O and Anothersunnyday rounded out the order of finish. Malibu Mistress was a late scratch. 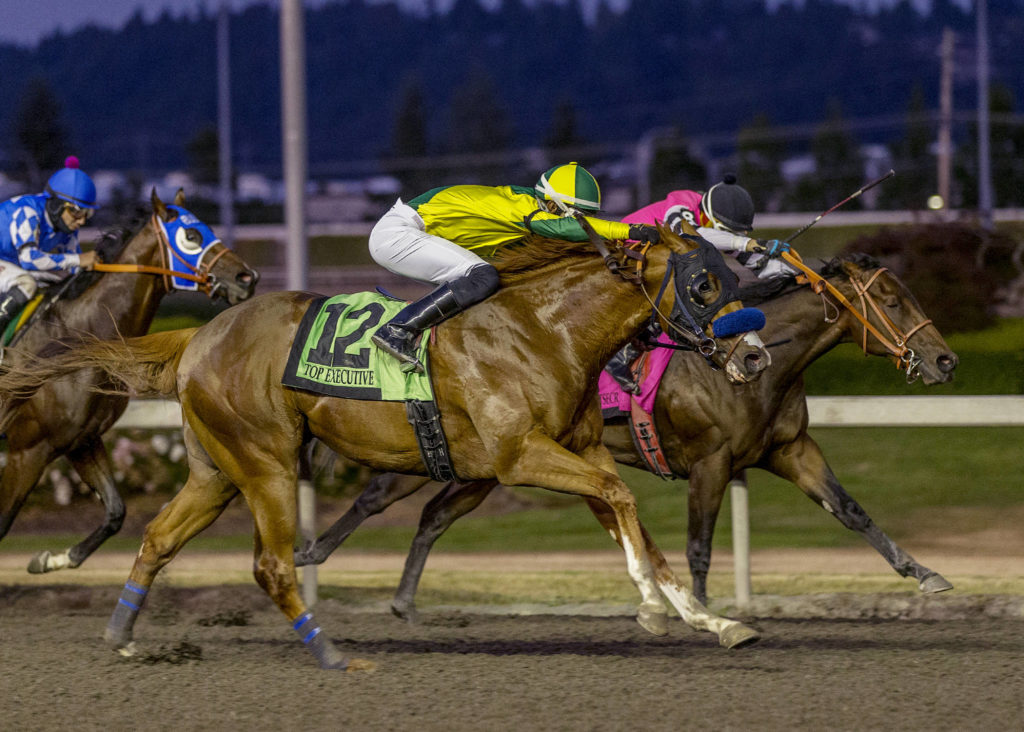 In the King County Express, Top Executive held off 6 to 5 favorite Seattlesbestsecret for a nose victory in 1:03.86 for 5 ½ furlongs. Ridden by Eddie Martinez at 121 lbs, Top Executive paid $28.60 as sixth choice in a field reduced to 10 after Dutton and Luke’s Place were both scratched at the gate. Blaine Wright is the trainer for owners John and Janene Maryanski and Gerald and Gail Schneider, the same connections as 2018 King County Express winner Baja Sur.

In fourth place early, Top Executive overtook Coastal Jazz in upper stretch and held off a surging Seattlesbestsecret for the victory.

A Kentucky-bred by Street Boss-Severn Shore, Top Executive had an eventful trip in his debut, breaking slowly and racing wide while finishing fourth in a race won by Seattlesbestsecret. Top Executive earned $19,800 to boost his earnings to $21,188.

NOTES: Harbor the Gold is now tied with Slewdledo for first place all-time with 412 winners sired at Emerald Downs. Harbor the Gold also is first with 65 stakes victories. . .The $0.50 Pick 4 on races 5 thru 8 paid a track record $29,571.40, besting the previous mark of $16,892.50 set July 10, 2016. . .Javier Matias rode four winners Thursday including a $65.80 score on Lolo Paniolo in the final leg of the giant Pick Four. The victory aboard Time for Gold is Matias’ 36th stakes win at Emerald Downs, good for No. 5 all-time. . .Frank Lucarelli saddled three winners and owns a 14-9 lead over Jorge Rosales and Blaine Wright in the trainers’ standings. . .Wright and Joe Toye had two wins each. . .Veteran rider James Wooten notched his first win of the meet aboard Sassy Edie, a 3-year-old Abraaj filly that paid a season-high $77.80 in race five. Wooten has 42 career wins at Emerald Downs. . .Sassy Edie and 35 to 1 runner-up Cards N Coffee produced a meet-high $429.10 for a $1 exacta. . .11-year-old Dreamcatcher ($5.80) improved to 2-1-0 in three starts at the meet, rallying past Mr Bingley for the victory in Thursday’s third race. A Kentucky-bred by Tapit, Dreamcatcher scored his maiden victory eight years ago at Del Mar and has won at nine different racetracks. . .Live racing resumes Wednesday, August 5, with first post 2:15 p.m.
–##–