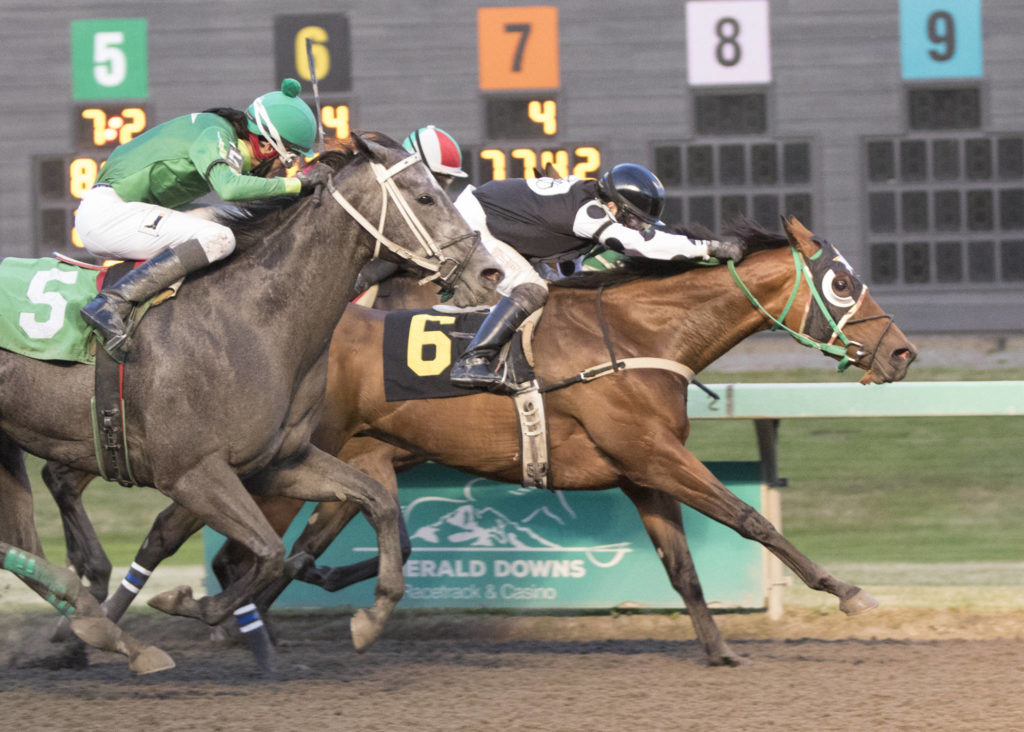 AUBURN, Wash. (July 16, 2020) – Alittlelesstalk held off Dontkissntell and scored a head victory Thursday in the $21,000 Muckleshoot Casino Purse for older fillies and mares at Emerald Downs.

Ridden by Juan Gutierrez, Alittlelesstalk ran 5 ½ furlongs in 1:03.39 and paid $10.40 as fourth choice in the wagering. Roddina Barrett is the winning trainer for owners Tim Floyd of Spokane and Kelly Dougan of Mountlake Terrace.

A 4-year-old Washington-bred by Demon Warlock-Trainingat the Bar, Alittlelesstalk was voted track and state champion 3-year-old filly of 2019 after compiling a 3-3-0 record from eight starts including two stakes wins and $85,976 in earnings. Her overall record is 5-3-0 in 12 starts and $104,776 in earnings.

Alittlelesstalk overhauled Killarney Lass into the stretch and gamely prevailed in a three-horse driving finish, with Alittlelesstalk proving a head better than a surging Dontkissntell at the wire.

Diamonds R, stable mate of Dontkissntell, was head back in third place while Killarney Lass, Paddy’s Secret and Broome rounded out the order of finish. Ima Happy Cat, the 5 to 2 morning line favorite, was scratched earlier in the day.

NOTES: Gutierrez rode two winners and is one away for 2,000 for his career. . .Alex Cruz rode three winners and tied Gary Wales atop the standings with 14 wins each. . .Cruz, Wales and Cerapio Figueroa have all ridden at least one winner on all eight cards this season. . .Star Gauge returned a meet-high $69.60 to win in race two, drawing off under Jose Zunino for Alan Bozell and owner Wanda Munger. . .Vinny From Dixie with a $68.20 mutuel in race five also scored at boxcars. Alex Anaya, who also had two wins Thursday, rode Vinny From Dixie for Rigoberto Velasquez and Bar C Racing Stable. . .Papa’s Golden Boy ($10.60) blazed some serious fractions—:21.37, :43.37, :55.61—while posting a meet fastest 1:09.38 for six furlongs in race eight for 3-year-olds and up. . . Dreamcatcher ($5) notched his 20th career victory in race seven and joined Doctor Bruce S. as 11-year-olds with wins at the meet. . .Live racing resumes Wednesday, July 22, with first post 2:15 p.m., and includes a $21,031 carryover in the $0.20 Jackpot Pick 7.
–##–