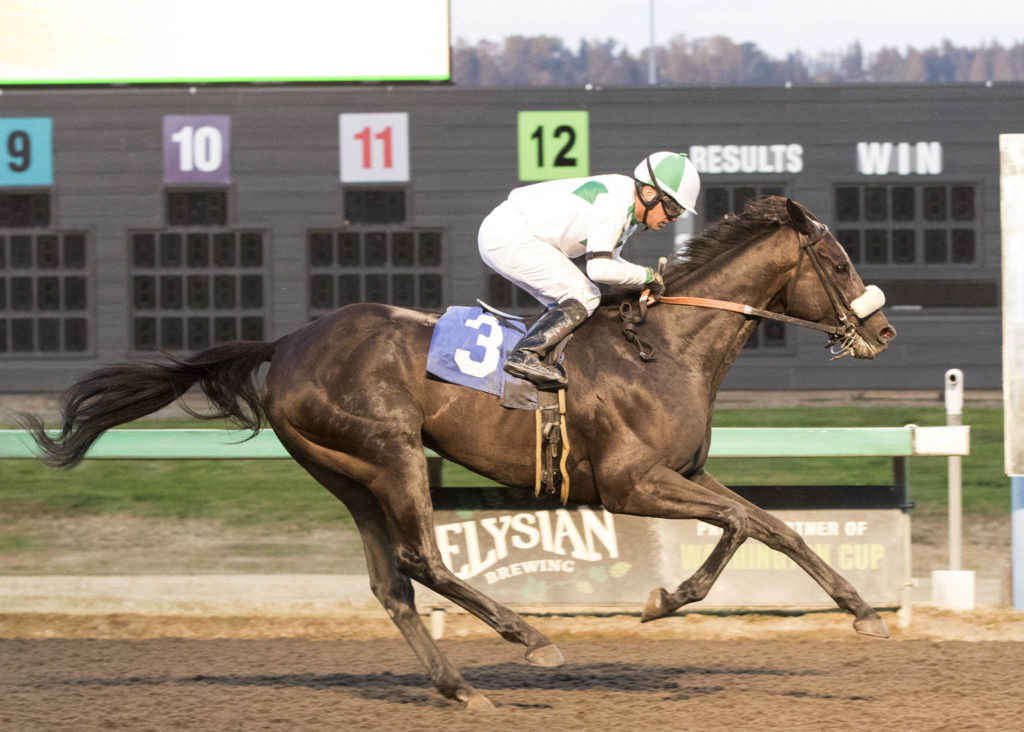 AUBURN, Wash. (July 15, 2021) – Mixo wore down Grinder Sparskaglo and So Lucky in the final yards for a two-length victory Thursday in the $12,320 Elysian Brewing Purse for 3-year-olds and up at Emerald Downs.

Ridden by Kevin Radke, Mixo ran 6 ½ furlongs in 1:16.90 and paid $8.20 as second choice in the wagering. Sharon Ross is the winning trainer for owner K & W Stable LLC.

Next to last on the backstretch, Mixo saved ground around the turn, angled out into the stretch and gradually reeled in the leaders and won going away. A 7-year-old Washington-bred by Abraaj, Mixo won for the third time in 31 starts at Emerald Downs and is six for 40 overall with earnings of $115,697.

Grinder Sparksaglo, the 6 to 5 betting choice ridden by Julien Couton, out finished So Lucky for second—the 10-year-old gelding’s third runner-up finish in as many starts this season at Emerald Downs. A Washington-bred by Grindstone, Grinder Sparksaglo is 17-17-14 in 72 career starts with earnings of $290,589.

So Lucky, with Jennifer Whitaker riding, held third after dueling through fractions of :22.41 and :45.08 for the quarter and half-mile. 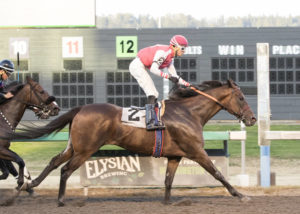 NOTES: Total mutuel handle was $1,256,776 on the eight-race program. . . One winning ticket in the $0.20 Jackpot Pick Six returned $30,925.80. It is the fifth payout in excess of $20,000 at the current meet. . .Trainer Candi Cryderman and owner John Parker combined for two victories Thursday, scoring with Unstoppable Gal ($14.40) in race one and Please Me ($7) in race three. Parker now ranks second in the owners’ standings with eight wins, two behind Greg Conley, Chuck Conley and Terra Firma Farm. . .Kevin Radke and Juan Gutierrez rode two winners apiece. Gutierrez has seven straight multiple win days. . .With a victory on Omache Kid ($7.60) in race six, Alex Cruz extended his track record consecutive days winning streak to 45. . .The Emerald Downs’ jockey colony held a moment of silence before the races to honor Eduardo Gutierrez-Sosa, a 29-year-old rider killed in a spill Wednesday evening in Prineville, Ore. . .Live racing resumes this weekend with an eight-race card Saturday at 6:30 p.m. and a nine-race card Sunday at 2:30 p.m. Sunday’s program features the $50,000 Angie C Stakes for 2-year-old fillies and $50,000 King County Express for 2-year-old colts and geldings.
–##–