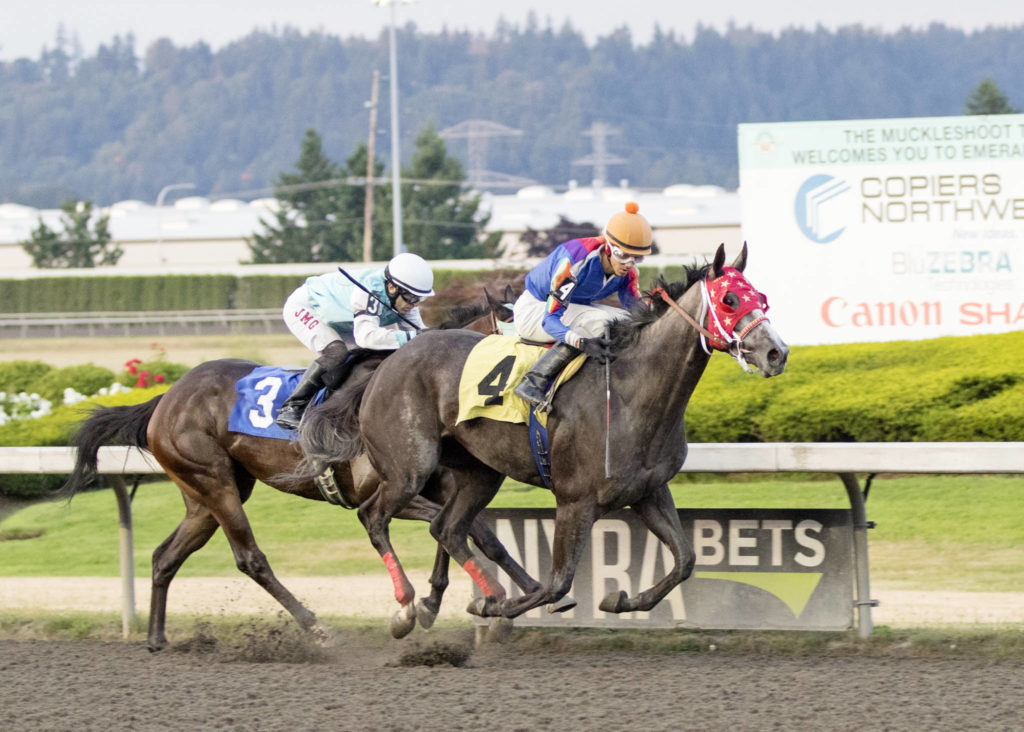 AUBURN, Wash. (July 1, 2021) – Blazingbellablu wore down Zippin Sevenz in the final furlong and scored a three-quarter-length victory Thursday in the $20,900 Budweiser Purse for older fillies and mares at Emerald Downs.

With Alex Cruz riding, Blazingbellablu ran six furlongs in 1:09.23 and paid $6.40 as the second betting choice. Charles Essex is the winning trainer and co-owner with Petra Lewin of Centralia, Wash.

A 3-year-old Washington-bred by Grazen, Blazingbellablu has won two straight and is 2-2-0 in five starts overall with earnings of $39,458. The gray filly began her career at Santa Anita in March, finishing second and sixth in a pair of $62,000 maiden races before shipping north to Emerald Downs.

Blazingbellablu had to work hard for the victory, however. Zippin Sevenz took over from For You Only midway on the turn, opened a 2 ½-length lead into the stretch, and resisted gamely when challenged by the eventual winner.

Ridden by Juan Gutierrez, Zippin Sevenz held second by 2 ½ lengths. You Go Girl, with Julien Couton riding, finished third, followed by For You Only, That’s My Story, Tothemoonandback and Aprilinthepines.

For You Only, the 8 to 5 betting favorite, weakened after leading the opening quarter-mile in :21.99.

NOTES: Total mutuel handle was $1,193,330 on the eight-race card. . .Cruz swept the late double, victories 30 and 31 for the meet’s leading rider, extending his consecutive days winning streak to 40. . .Juan Gutierrez and Jose Zunino also rode two winners each. . .Trainers Rosie Simkins and Shelly Crowe each saddled their first winner of the meet, Simkins scoring with first-time starter Lutes Lil Gift ($19.40) in the opener and Crowe with Deepingreen ($19.20) in race two. . .Reelfoot ($7) made it straight wins off the claim for trainer Ed Cornier and Run Free Racing, rallying inside to win race four in 1:15.41 for 6 ½ furlongs. A 5-year-old Flatter gelding, Reelfoot has four wins this year—one at Oaklawn Park, one at Sam Houston, two at Emerald Downs—and over $44,000 in earnings. . .Jockey Ryan Barber was off his mounts after banging his knee in a starting gate mishap Wednesday. . .Live racing continues Saturday with first post 6 p.m.
–##–