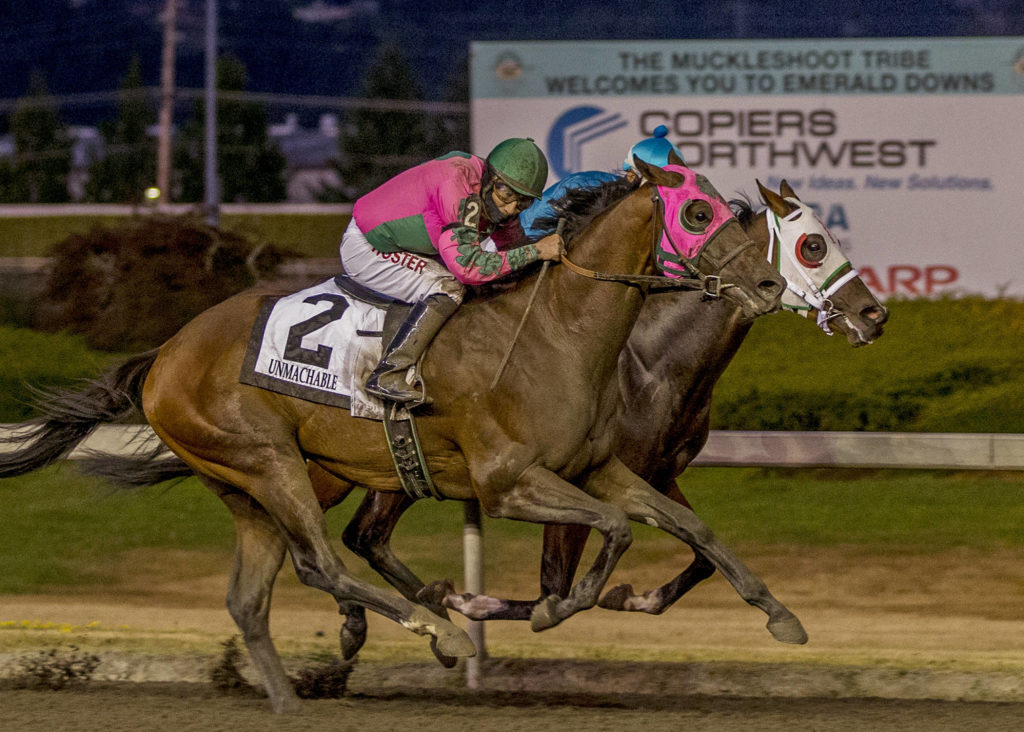 Unmachable (No. 2) surges past Gold Crusher in the Seattle Slew Stakes

AUBURN, Wash. (August 6, 2020) – Unmachable collared Gold Crusher in the final strides for a half-length victory Thursday in the $40,000 Seattle Slew Stakes for 3-year-old colts and geldings at Emerald Downs.

Earlier on the card, heavily favored Daffodil Sweet remained unbeaten with a dominating victory in the $40,000 Coca-Cola Stakes for 3-year-old fillies.

In the Seattle Slew, Unmachable passed the entire field in the stretch for the second stakes victory of his young career.

Ridden by Javier Matias at 120 lbs, Unmachable ran 6 ½ furlongs in 1:15.84 and paid $5.60 as the betting choice. Jack McCartney is the winning trainer for owner Tawnja Elison of Eagle, Idaho.

A Washington-bred by Macho Uno, Unmachable is 2-1-2 in five lifetime starts with earnings of $71,065, including $22,000 for Thursday’s victory. The gelding debuted last September with a victory in the Washington Cup Juvenile, followed by a second in the Gottstein Futurity. He traveled to Phoenix and finished third in a stakes late last year and was third while making his 2020 debut in an allowance test here last month.

Unmachable settled about 10 lengths off the pace as Tig and Vroysky dueled through fractions of :22.14 and :44.52, gathered momentum into the lane and surged in the final furlong to tag Gold Crusher in the shadow of the wire.

Gold Crusher, ridden by Eddie Martinez at 121 lbs, powered past Tig into the lane and appeared home free for the victory, but Unmachable’s late rally was too much to withstand.

Muncey, with Jennifer Whitaker riding, closed ground to finish third, while Wilson to Lockett, Tig, Mosquito Fleet and Vroysky rounded out the order of finish. 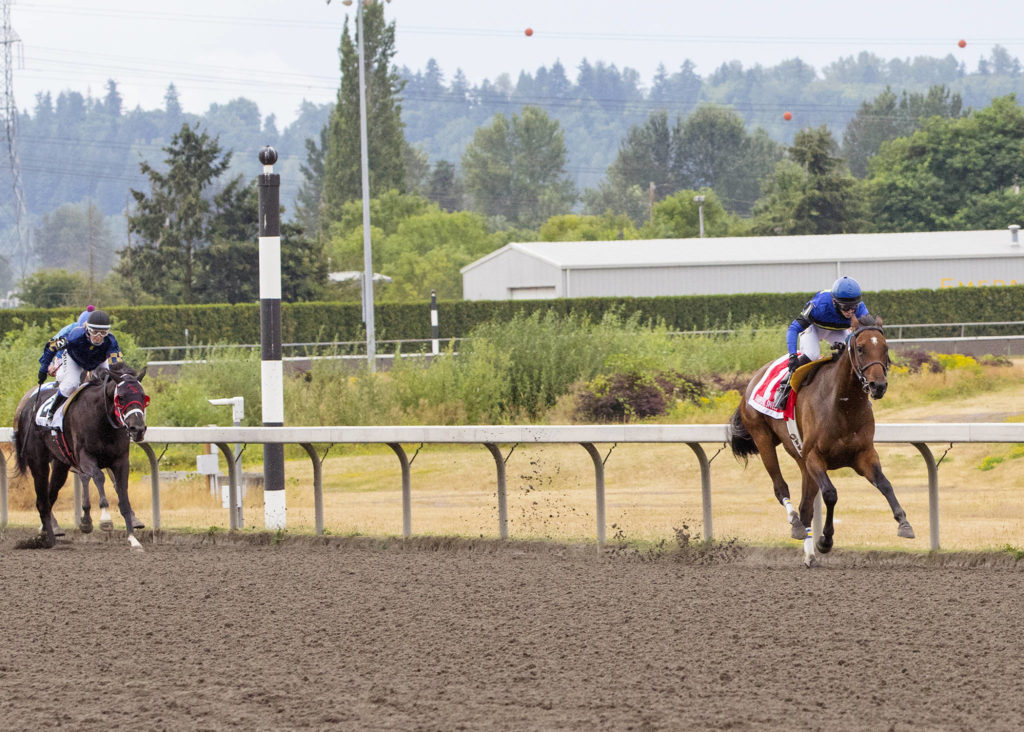 Undefeated and still unchallenged, Daffodil Sweet powered to a six-length victory over For You Only in the $40,000 Coca-Cola Stakes for 3-year-old fillies.

It was the third consecutive dominating performance and first stakes victory for Daffodil Sweet, who joins Omache Kid as three-time winners at the meeting.

Breaking from the No. 1 post-position, Daffodil Sweet gradually gained command into the turn, opened a commanding lead into the stretch and rolled home as much the best. She set fractions of :22.42, :4515 and 1:10.12.

Daffodil Sweet has three victories in 37 days, all at different distances. She debuted July 2 with an 8 ¾ length victory at 5 ½ furlongs, followed by a 7 ¾-length allowance score at six furlongs on July 23, and capped by Wednesday’s six-length triumph in the Coca-Cola.

A California-bred by Ministers Wildcat, Daffodil Sweet earned $22,240 to boost her career total to $42,590.

NOTES: After a payoff of over $32,000 in Wednesday’s $0.50 Pick 5, Thursday’s Pick 5 produced a payoff of $22,434.80. . .Jockey Alex Cruz and trainer Jose Navarro combined for two wins including the second victory of the season for 11-year-old gelding Doctor Bruce S. ($14.20). . .Cruz, Jake Samuels and Juan Gutierrez rode two winners each Thursday. . .Through 14 days of racing, Cruz and Gutierrez are tied for first with 21 wins apiece while Gary Wales is third with 20 wins . . .Jack McCartney also had two training wins Thursdays. . .Javier Matias is No. 5 all-time with 37 stakes wins at Emerald Downs, including two this year. . .Coulterberry ($13.70) prevailed in the $50,000 Lieutenant Governors’ Handicap at Hastings Racecourse. Winner of last year’s Muckleshoot Tribal Classic, the 7-year-old Finality gelding ran 6 ½ furlongs in 1:16.80 and is 11 for 26 lifetime. . .Early birthday wishes to former jockeys Russell Baze and Joe Steiner, who celebrate No. 62 and 56 respectively on Friday. . .Live racing resumes Wednesday, August 12 with first post 2:15 p.m. Next weeks’ action features the $40,000 Boeing Stakes for older fillies and mares and $40,000 Mt. Rainier Stakes for older horses, both at 6 ½ furlongs on Thursday, August 13.
–##–