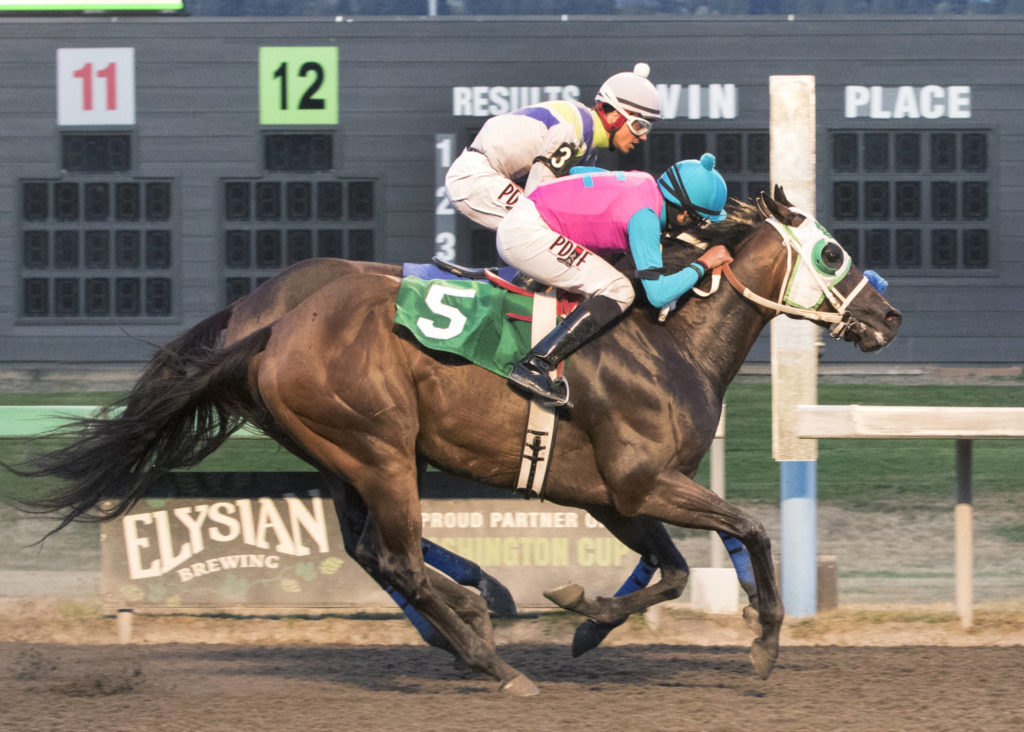 Baltimore Beecho (No. 5) by a nose over Buckley Bay

BALTIMORE BEECHO BY A WHISKER IN FEATURE RACE

AUBURN, Wash. (Aug. 5, 2021) – Baltimore Beecho held off Buckley Bay for a nose victory in Thursday’s $10,500 Muckleshoot Casino Purse for 3-year-olds and up at Emerald Downs.

With Jose Zunino riding his third winner on the card, Baltimore Beecho ran 6 ½ furlongs in 1:17.67 and paid $14.40 as fourth choice in the wagering. Ken Person is the winning trainer for owner Brent Stapley.

Buckley Bay, the 6 to 5 favorite ridden by Alex Cruz, overtook Roman Rush into the stretch and continued gamely to the wire, just missing his third victory of the season. Lolly Express, ridden by Joree Scriver, finished third and Licorice Drop Pops, Roman Rush and Crack a Cold One rounded out the order of finish. Diction fell soon after the start and was vanned off. Hot Encounter was scratched.

For Zunino, his three-win night boosted his Emerald Downs career total to 400. He is the 14th jockey to achieve the milestone.

NOTES: Total mutuel handle was $945,580 on a seven-race card. . .Five Star General worked five furlongs in a bullet :58 4/5 Thursday in advance of the $100,000 Longacres Mile (G3) on Sunday, Aug. 15. A 5-year-old by Distorted Humor, Five Star General finished second to Anothertwistafate in the 2020 Mile. . .Trainer Candi Cryderman and owner John Parker combined for wins with Dreamer’s Reality ($5.40) and Dame of the West ($3.20). . .Parker moved atop the owners’ standings with 13 wins, two ahead of Greg and Chuck Conley and Terra Firma Farm. . .Freiburg ($9.80) prevailed in race five and trainer Rigoberto Velasquez has at least one win on four straight cards. . .There is a $3,491 carryover in the Super High Five. . .Live racing continues Saturday with first post 6:30 p.m.
–##–