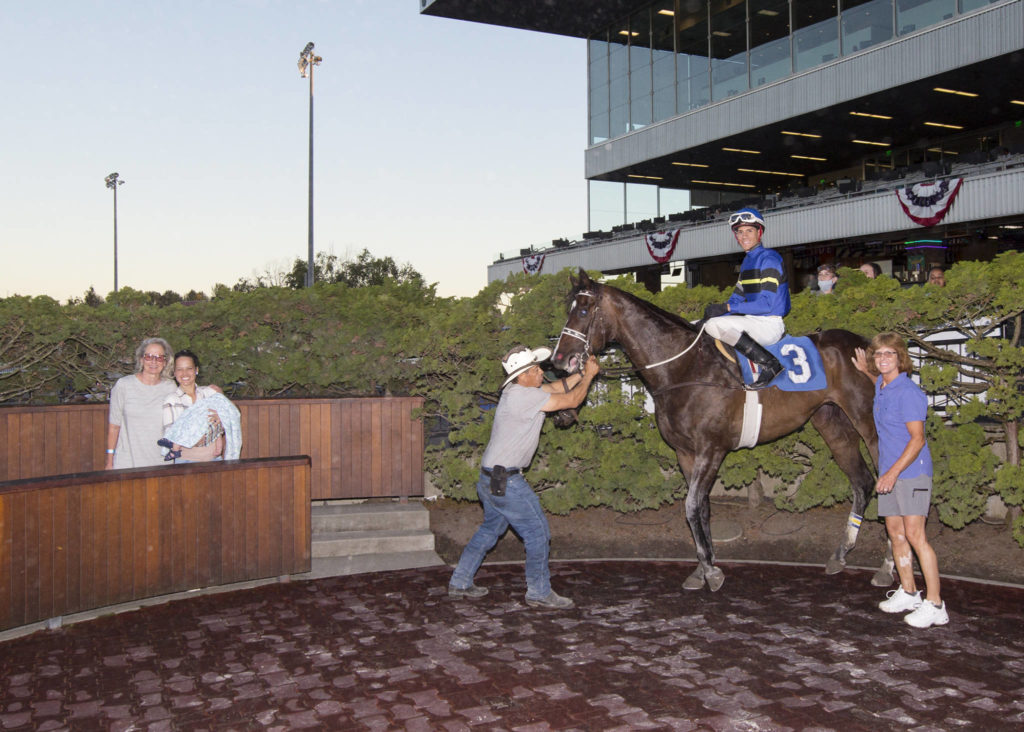 Under regular rider Alex Cruz, Spittin Image ran a mile in 1:37.02 and paid $11.40 as second choice in the wagering. Chris Stenslie is the winning trainer and co-owner with One Horse Will Do Corporation (Jody Peetz, Issaquah, Wash.)

Spittin Image edged clear of 1 to 2 favorite Papa’s Golden Boy into the stretch but was immediately tackled by 9-year-old multiple stakes winner Oh Marvelous Me and the geldings battled head and head to the wire.

Spittin Image, younger brother of 2016 Horse of the Meeting O B Harbor, has now won three of his last four starts—all allowances with Cruz aboard. His only defeat during the streak was a third to stable mate Hard to Deny on July 24.

Oh Marvelous Me, ridden by McKenna Anderson, actually got a slight lead past mid-stretch but was outfinished late by Spittin Image and settled for second.

Swamp Souffle rallied from last to finish third while Papa’s Golden Boy, Big Endeavor and Forest Fire rounded out the order of finish.

Papa’s Golden Boy, fourth in the Longacres Mile 11 days ago, vied for command with Spittin Image through a half-mile in :46.49 and gave way through the stretch.

NOTES: Mutuel handle totaled $1,004,618 on a seven-race card. . .After winning both stakes Sunday, trainer Kay Cooper had another two-win day—Northwest Rain ($4.40) and Fortune’s Freude ($22)— and has won with 10 of her last 19 starters overall. . .Frank Lucarelli had the winning exacta in the $20,350 maiden special weight for 2-year-olds with Boss Nine ($14.20) defeating Golden Ale by three quarters of a length in 1:05.47 for 5 ½ furlongs. Both were first-timers sired by Goldencents. . .Lucarelli also won the nightcap with Grazen Valor ($7.80) off a five-month layoff and is making a serious bid for a third straight training title. With 12 days remaining, Joe Toye owns a 22-20 lead over Lucarelli. . .Live racing continues Saturday with first post 6:30 p.m.
–##–