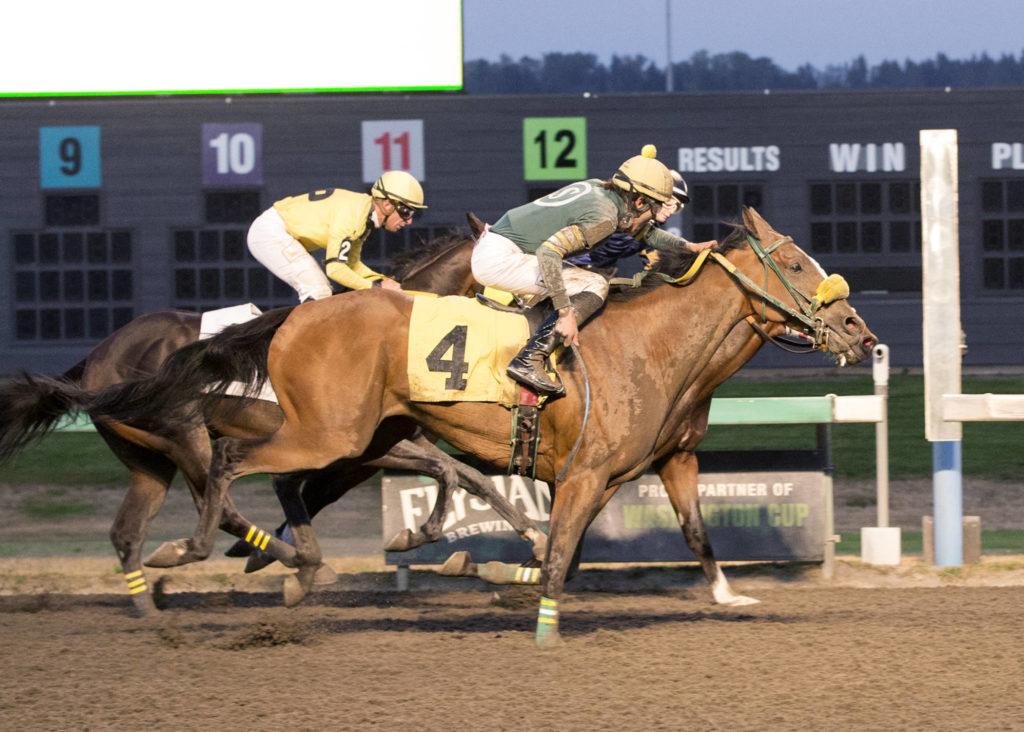 Vicente’s Shadow (No. 4) and Alex Anaya up in the final stride.

Under a perfectly timed ride by Alex Anaya, Vicente’s Shadow covered 5 ½ furlongs in 1:04.15 and paid $27.80 as the longest price in the five-horse field. Satchell Stevens is both winning owner and trainer.

Forever Gold, ridden by Jennifer Whitaker, nearly led gate to wire, kicking three lengths clear after an opening half-mile in :44.55 seconds. But Vicente’s Shadow made up some 10 lengths in the stretch and was up in time for the victory.

Float On, the 8 to 5 favorite bidding for his fourth win of the season, finished third while Orcadian Storm and Atta Boy Billy completed the order of finish. Coastal Jazz was scratched. 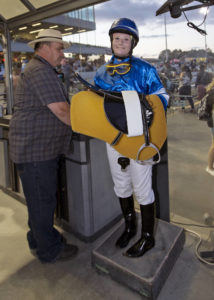 NOTES: Mutuel handle totaled $833,178 on a seven-race card. . .Trainers Scott Freeman and Billy Christian each notched their first winners of the meet—both with McKenna Anderson riding. Freeman saddled Cards N Coffee ($16) to a gate to wire score in race two while Christian tallied with Lolly Express ($12.60) in race five, Anderson guiding the 6-year-old gelding through a narrow opening inside to prevail in a blanket finish. It’s the first multiple win day for the 22-year-old apprentice rider. . .Cards N Coffee’s victory broke a string of 18 consecutive single digit payoffs dating to the eighth race on Thursday, Aug. 12. . .Jockey Juan Gutierrez was excused from his mounts due to illness. . .Alex Cruz and Charles Essex are a combined 10 for 30 this season including a victory by Pin Up Lady ($3.40) in Thursday’s third race. . .Cruz rode two winners and leads Julien Couton 60-54 atop the standings. . .3-year-old filly In the Wind ($5.60) became a triple winner at the meet with a come from behind victory in race four. A Kentucky-bred by Big Blue Kitten, In the Wind has victories for three different trainers this season—Essex, Jorge Rosales, David Martinez—and could make it four next out as Joe Toye claimed her for $8,000 Thursday. . .Toye won the nightcap with Shark Harbor ($3.40) and leads Frank Lucarelli 22-17 in the trainers’ race. . .Live racing resumes Saturday with first post 6:30 p.m.
–##–