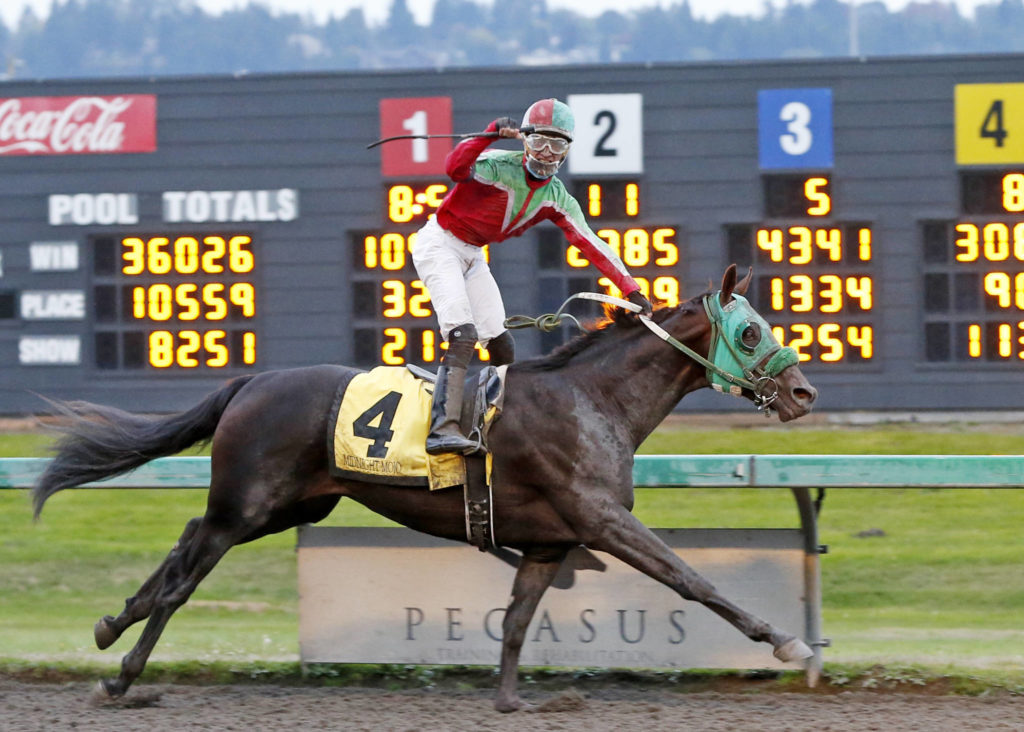 Far back early, Midnight Mojo began picking off rivals on the last turn, engaged Diamond Willow past mid-stretch, and surged clear to win going away.

A maiden before Sunday, Midnight Mojo improved to 1-0-1 form four starts with earnings of $48,789—including a hefty $44,000 check for winning the Gottstein.

“Since the first time he started galloping I’ve loved this horse,” Martinez said. “We knew that he wanted to go the distance. I had a lot of horse.”

For Wenzel, seventh all-time with 42 stakes wins at Emerald Downs, it was his first victory in the region’s long-time signature event for 2-year-olds.

“This race has been really elusive, but we felt comfortable (Midnight Mojo) could get the distance,” Wenzel said.

Diamond Willow, the 3 to 1 second choice ridden by Alex Cruz at 120 lbs, was out finished for first, but finished six lengths clear of the third-place finisher Big Paper Daddy.

Also a maiden, Diamond Willow nursed a short lead through fractions of :22.98, :46.97 and 1:12.57,and resisted gamely when headed by Midnight Mojo through the stretch. 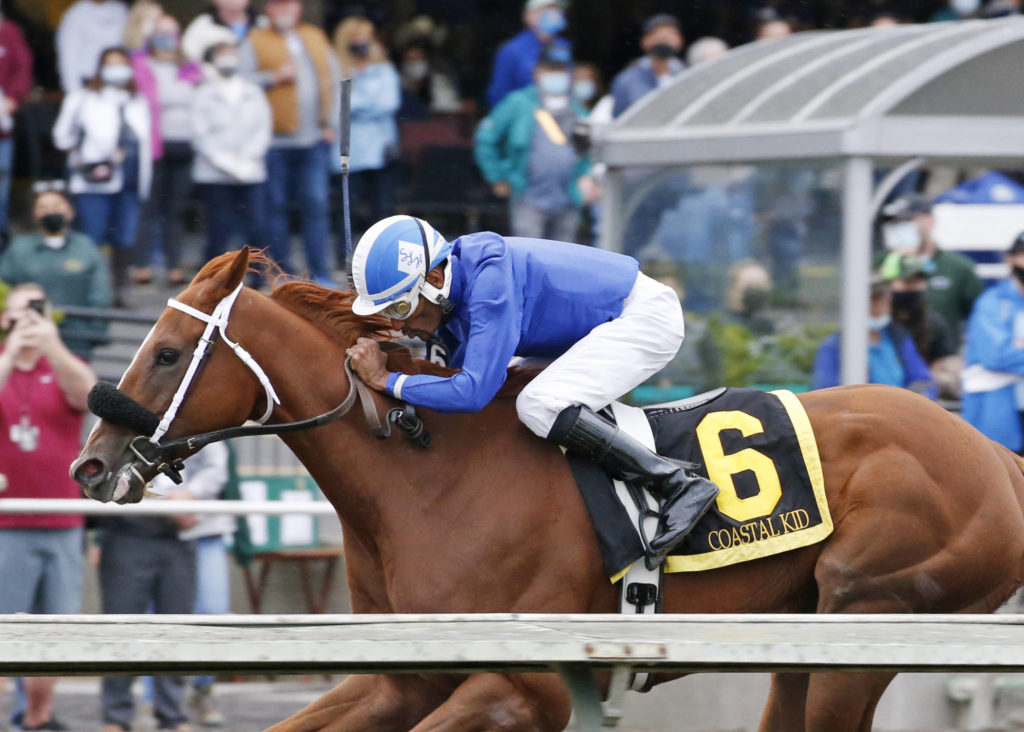 Coastal Kid overtook Spittin Image into the stretch and drew away for a convincing 3 ¼-length victory over Stay Fantastic in the $50,000 Muckleshoot Tribal Classic for Washington-bred and British Columbia-bred 3-year-olds and up.

With Wayne Barnett aboard for his first career win at Emerald Downs, Coastal Kid ran a mile and one-sixteenth in 1:42.61 and paid $7, $4.20, and $3. Jeff Metz is the trainer for winning owners Steve and Letha Haahr of Puyallup, Wash.

The victory was redemption for Coastal Kid, who heretofore had been plagued by hard luck at Emerald Downs.

Coastal Kid missed a possible win in the 2020 Gottstein Futurity by ducking out in the final furlong, and a similar mishap probably cost him another victory in an August 12 allowance race. Most recently, Coastal Kid ran straight but sustained a heartbreaking head defeat to possible Horse of the Meeting Top Executive in the Muckleshoot Derby.

Things went smoothly in the Muckleshoot Tribal Classic and Metz and the Haahrs were able to exhale and rejoice after an overdue win.

“This horse has been unlucky as we know,” Metz said. “He’s run well wherever we’ve run him. It’s hard to believe this is just his second win.”

Said Steve Haahr: “We’re real ecstatic. He finally got there. He deserved it.”

A 3-year-old Washington-bred by Coast Guard, Coastal Kid joins 2020 winner Unmachable as the only 3-year-olds to win the race that for many years was named the Washington Championship.

Canadian Invader Stay Fantastic finished smartly to take second place and paid $5 and $3.40. Alexander Marti was aboard the runner-up for od Mountain Thoroughbreds.

Spittin Image, ridden by Alex Cruz, held third and paid $3 for show. Bidding for his fourth win of the meeting, Spittin Image led through fractions of :23.55, :47.72 and 1:11.83, resisted when challenged by Coastal Kid into the stretch and weakened in the final furlong.

Unmachable, the defending champion, never got untracked and finished 10 ½ lengths back in fourth place while Stand To and Sherm rounded out the order of finish. 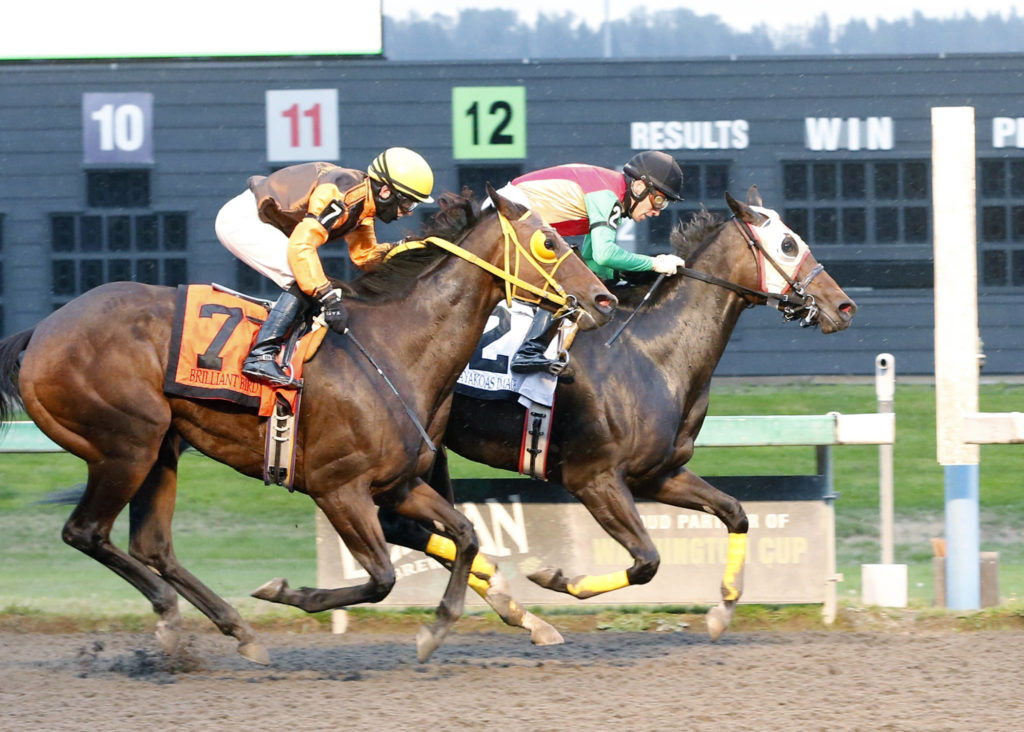 Bayakoas Image holds off Brilliant Bird for a neck victory

It wasn’t easy but heavily favored Bayakoas Image got the job done, holding off longshot Brilliant Bird and scored a neck victory in the $50,000 Washington Cup Filly and Mare Stakes.

Bayakoas Image remained perfect at Emerald Downs, sweeping the Washington Oaks and Washington Cup Filly and Mare, and is 5-2-0 in eight starts overall with earnings of $99,494. She’s three for three at a mile and one-sixteenth.

Bayaokas Image and Brilliant Bird were practically in a match race, dueling through fractions of :22.94, :46.54 and 1:10.37. They raced head and head through the stretch with Bayakoas Image proving slightly better.

“She made me work a little harder today,” Marti said. “(Brilliant Bird) was tough, she wouldn’t go away, but Bayakoas Image got it done.”

Ms Lynn, ridden by Julien Couton at 120 lbs, was three lengths back in third and paid $3.80 to show.
Blazingbellablu, Dontkissntell, Rea Mea and Jacana completed the order of finish. 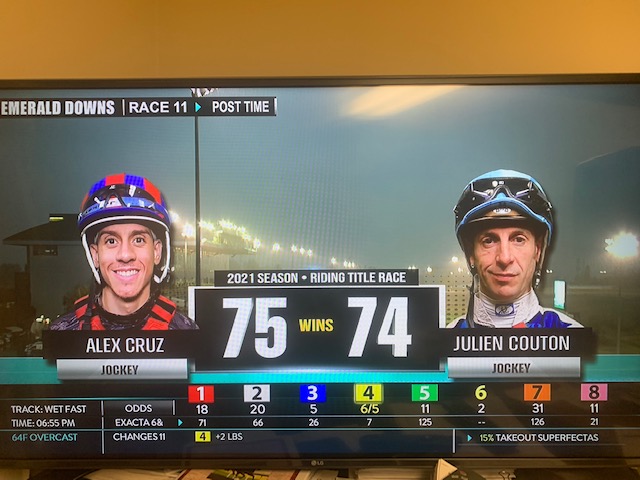 In the closest jockeys’ race in track history, Alex Cruz edged Julien Couton 75-74 for the 2021 Emerald Downs riding title. It marks s the second consecutive title for Cruz, who captured the 2020 crown with 72 wins.

The 10th race proved the decider, as Cruz rallied Shelby R. to a head victory over Cards N Coffee for win No. 75. Couton had tied Cruz at 74 with a win on Extractor in the Sunday opener.

Joe Toye won the training title, his first at Emerald Downs, by a 29-26 margin over seven-time training champion Frank Lucarelli.

John Parker was the leading owner for the fourth time in six years, edging Greg and Chuck Conley and Terra Firma Farm by a 19-16 margin.

NOTES: Total mutuel handle was $1,447,409 on an 11-race program. . .The track was listed fast for races 1 through 10 and wet-fast for race 11. . .Retiring trainers Chris Stenslie and Sharon Ross both finished third with their final starters, Spittin Image finishing third for Stenslie in the Muckleshoot Tribal Classic and Whata Flirt finishing third for Ross in the 10th race. . .Trainer Candi Cryderman had two wins Sunday. . .2021 Horse of the Meeting and a complete list of divisional winners will be posted Monday on emeralddowns.com. . .The Press ($7.60) nosed out Reelfoot in the Sally and Joe Steiner Appreciation Purse named in the popular longtime proprietors of the Quarter Chute Café. . .That’s a wrap for 2021. See you next spring for our 27th season of live racing!
–##–