Boundary Bay finished third while Sippin Fire, bidding for a fifth consecutive stakes victory, finished fourth as the 6-to-5 favorite.

A stakes winner in Dubai, Yulong Warrior had raced only once previously in North America, finishing fourth in the $100,000 Shared Belief last month at Del Mar. O’Neill said via text that Niall Daulton and Michael Donohoe, representatives of the owner, made the decision to run at Emerald Downs.

“I was in Dubai when this horse raced, we’ve always liked him,” Mora said.

Yulong Warrior saved ground while racing off a fairly fast pace, as Boundary Bay led through six furlongs in 1:10.50. Angled out into the stretch, Yulong Warrior swept past Boundary Bay and Weekend Wizard and won going away. The winning time was second fastest of the meet for 1 1/16 miles; Riser won the Mt. Rainier Stakes in 1:40.08.

“We broke a little slow, but he’s a smart horse and was very relaxed,” said Roman, the Eclipse Award-winning Apprentice of 2017. “When I asked him, he really ran a big one today.”

Weekend Wizard overtook Boundary Bay into the lane but was unable to withstand the winner and finished second. Ridden by Rico Walcott at 124 lbs, the runner-up paid $3.60 and $2.80.

Sippin Fire raced in striking position to the head of the lane but lacked his customary punch under Rocco Bowen and finished fourth. Nevertheless, the Harbor the Gold gelding was voted 2018 Horse of the Meeting, Top 3-Year-Old and Top Washington-bred.

Hey Sequoia, Canadian Game, Elliott Bay and Not Yet completed the order of finish.

Northwest Factor (No. 8) and Gary Wales

Although Sippin Fire didn’t get the top prize in the Getaway, the ownership group How We Roll #4 still had plenty to cheer about Sunday.

Northwest Factor, owned by How We Roll #4 and trained by Steve Bullock, wore down Time ’n Time Again for a head victory in the $89,500 Gottstein Futurity for 2-year-olds.

With the victory, Northwest Factor became a double stakes winner at the meet and clinched honors as Top 2-Year-Old Filly. A Kentucky-bred by The Factor, Northwest Factor is 2-2-2 in six starts with earnings of $95,700, including a hefty $47,850 for the Gottstein.

Northwest Factor earned the victory Sunday. Prominent throughout, she gutted it out through the stretch and finally pushed past Time ’n Time Again in the last few jumps.

“I hadn’t won a stakes all meet, so this is really nice,” Wales said. “I’ve been watching this filly and I knew she wanted to run long.”

Time ’n Time Again, ridden by Julien Couton, finished second but was disqualified and placed last for interfering with Frolic and Detour past mid-stretch. Frolic and Detour and jockey Eswan Flores were attempting to rally inside and went down hard in the mishap, but both the jockey and rider appeared to escape the incident uninjured.

Palladium, ridden by Evin Roman, was promoted from third to second place and paid $4.20 and $3.80. The outcome gave O’Neill a win and a second with his two Southern California shippers.

Fuzzy Dolphin, with Kevin Orozco riding, finished fourth but was moved up to third and paid $6.80 to show. Winner of the Washington Cup Juvenile Colts & Geldings three weeks ago, Fuzzy Dolphin set fractions of :22.84, :46.08 and 1:10.79 before yielding to Time ’n Time Again into the stretch. Mr. Frank, Forty Six Carats, Ally On Fire, Emily’s Gold, Reno Roy and Hardy Chisel completed the order of finish.

For Bullock, the victory was his sixth stakes wins this season; four with Sippin Fire and two with Northwest Factor.

Hit the Beach and Eswan Flores

Hit the Beach continued his late-season assault with a powerful 1 ¾-length victory in Sunday’s $25,000 Pete Pedersen Overnight Stakes for 3-year-olds and up.

Hit the Beach finished the season with three wins in his last four starts, including the Muckleshoot Tribal Classic and the Pete Pedersen, and had four wins overall. A 5-year-old Washington-bred by Harbor the Gold, Hit the Beach earned over $64,000 this season.

Oh Marvelous Me, the 8 to 5 favorite ridden by Julien Couton at 120 lbs, finished third while rallying into a hot pace and paid $2.60 to show. A 6-year-old Bluegrass Cat gelding, Oh Marvelous Me was coming off a third in the Longacres Mile and is now 6-3-4 in 14 career starts at Emerald Downs.

Kaabraaj held the previous mark for fastest 6 ½ furlongs of the meeting with a 1:14.31 clocking on July 8. 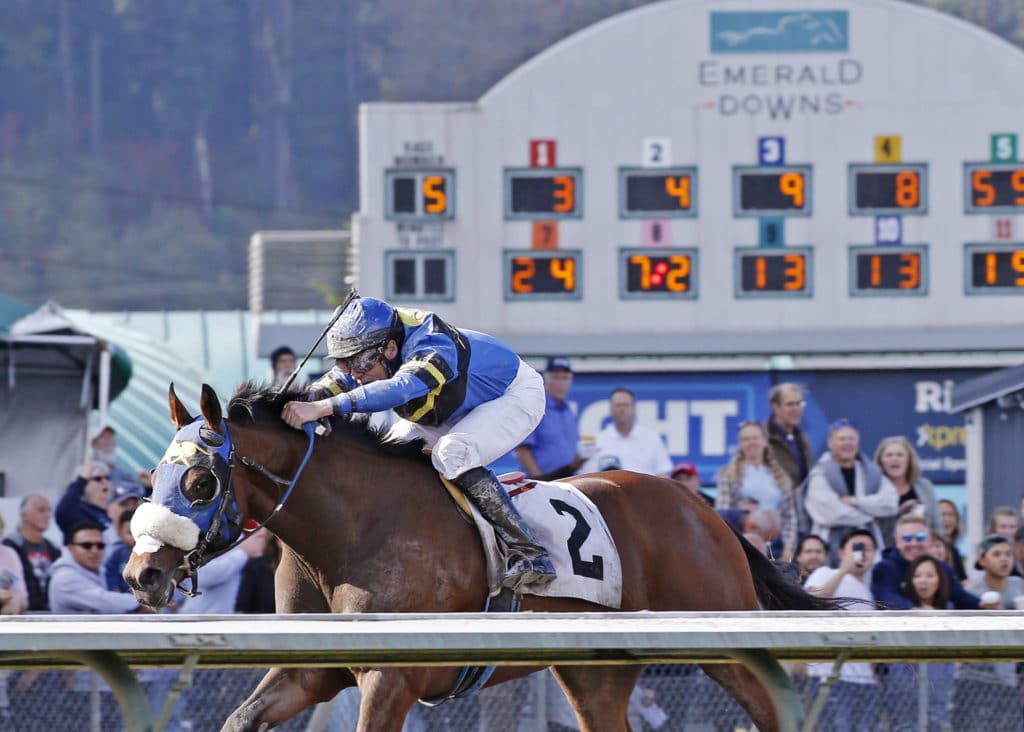 No Talking Back and Jose Zunino

No Talking Back capped a strong season with a 2 ¼-length victory in the $25,000 Fan Appreciation Day Stakes for older fillies and mares.

Beginning the season a maiden, No Talking Back compiled a 3-1-2 record in seven starts and earned $59,350 for owners Jody Peetz of Issaquah and Steve Shimizu of Bellevue.

A 4-year-old Washington-bred by Flatter-Talk to My Lawyer, No Talking Back was stakes-placed three times this season but was coming off an uncharacteristic sixth in the Washington Cup Filly and Mare two weeks ago. Sunday, she got a perfect and notched her first stakes win, sitting behind a hot and contested pace before bounding to the lead into the lane.

Camano Comet, the leader through six furlongs in 1:10.23, finished fourth and was followed by Brilliant Bird, Little Dancer, Jerre to Carrie, Gazing, Retreat Yourself, McDove and Guardian One.

Talk to My Lawyer, dam of No Talking Back, won the 2011 Gottstein Futurity while Blazinbeauty won the 2016 Gottstein.