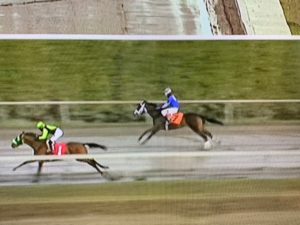 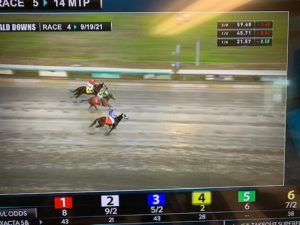 AUBURN, Wash. (Sept. 19, 2021) – In one of the most incredible riding feats in track history, jockey Alex Cruz rode the entire 5 ½ furlongs without irons and somehow emerged victorious aboard Akasi in Sunday’s fourth race at Emerald Downs.

Cruz lost his irons leaving the gate, dropped over 15 lengths behind the field as Cruz tried in vain to get his feet back in the stirrups, raced extremely wide into the stretch, and somehow managed to rally past all four rivals for a three-quarter-length victory in 1:06.52 for 5 ½ furlongs.

Although Cruz was unable to get his feet in the irons, he had the wherewithal to urge Akasi through the stretch and win the race. Owned and bred by Jack Hodge’s Oak Crest Farm and trained by David Martinez, Akasi paid $4.20 as the betting favorite

“At the start, she stumbled and ducked out, that’s when I lost my irons,” Cruz said. “I tried to recover but it was so muddy and my boots were slipping. I was going to pull her up going into the turn, but when we started to gain some ground, we went on with it!”

A 2-year-old Run Away and Hide filly, Akasi had finished second in all three previous starts including a runner-up in the Angie C Stakes.

A 28-year-old native of Puerto Rico, Cruz is vying for a second straight riding title at Emerald Downs. Cruz recorded four wins Sunday and is tied with Julien Couton for first with 73 wins apiece. Two days remain in the season–Saturday, Sept. 25 and Sunday, Sept. 26.

In the winner’s circle, Hodge marveled at Cruz’ riding feat.

“I’ve always loved Alex Cruz because he always rides hard the whole race even if he’s not going to win,” Hodge said. “Today he had every reason to pull my filly up after losing his irons, but he knows the filly and her closing style and chose to continue riding. Alex is a tremendous athlete.” 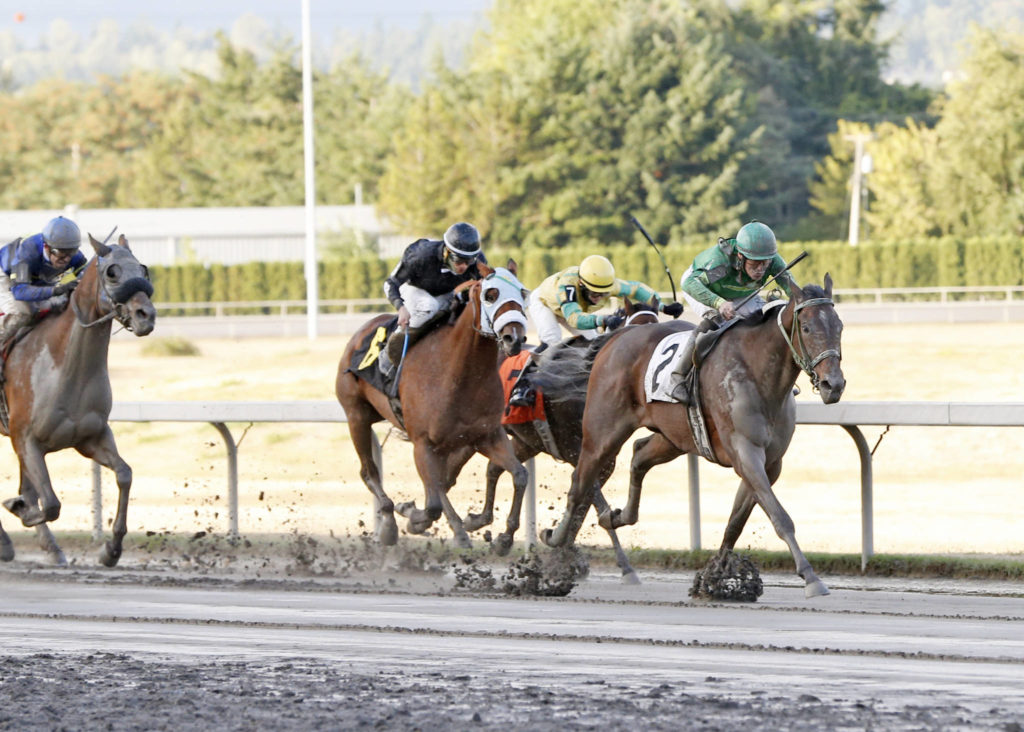 In Sunday’s $20,900 Comfort Inn Auburn Purse for 3-year-olds and up, Slew’s Tiz Whiz rallied for a 2 ½-length victory under jockey Jose Zunino.

A 3-year-old Washington-bred gelding by Slew’s Tiznow, Slew’s Tiz Whiz ran 6 ½ furlongs in 1:16.07 on a sloppy track and paid $3.60 to win. Tom Wenzel is the winning trainer for K D Thoroughbreds.