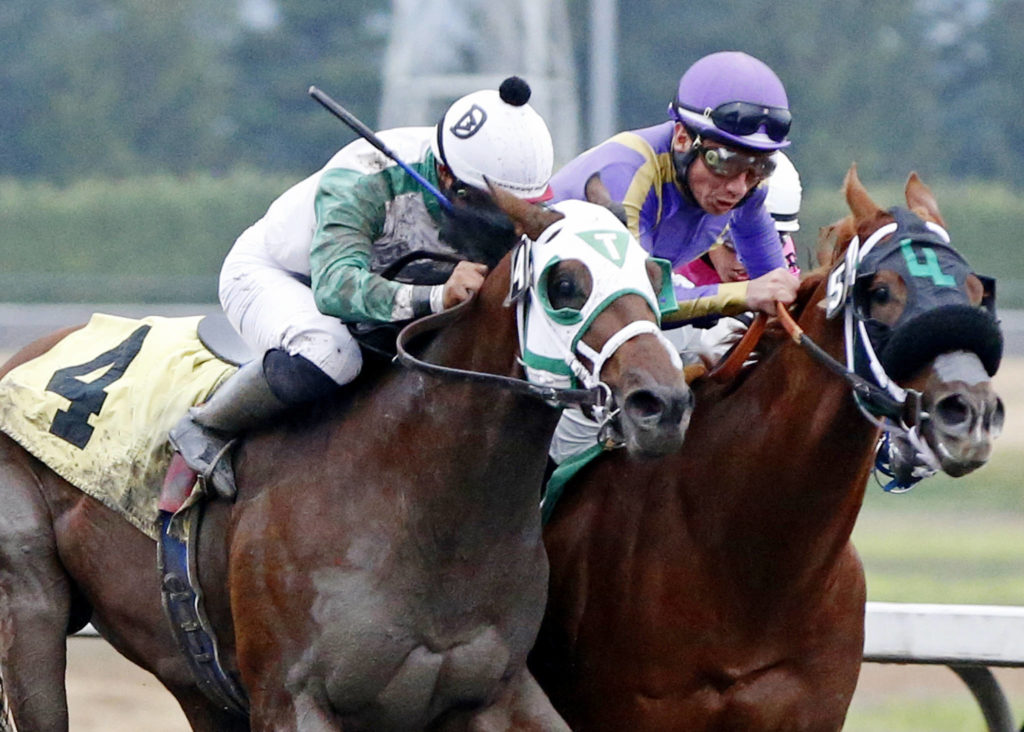 AUBURN, Wash. (September 17, 2017) – Candy for Three out finished Keller’s Gold for a nose victory Sunday in the $21,000 Muckleshoot Casino Purse for 3-year-olds and up at Emerald Downs.

A Kentucky-bred by Candy Ride, Candy for Three capped a fine sophomore campaign for Tollett. The bay colt compiled a 3-0-2 record in eight starts, earning $39,490 in purses including $11,550 for Sunday’s victory.

Keller’s Gold, with Javier Matias riding, raced head-and-head with the winner to the wire but finished a nose short of the victory. Aberdeen Island, Pulpits Power and Cats Champ rounded out the order of finish.

For Martin, a 24-year-old Guatemalan, it was the first hat-trick of his career and boosted his season total to 18 wins. He and Tollett also clicked with Inawar ($8.60) in race seven.

NOTES: In addition to Martin with three wins, Rocco Bowen and Julien Couton each rode two winners on the 11-race card. . .Cruiser Blue ($41.40) and Executive Decree dead-heated for the victory in the 11th race. . .Cruiser Blue returned a season-high $42.80 to place, topping a $34.60 place mutuel by Fluidity on August 25. . .Six of Sunday’s winners paid double-digits, including Sierra Romance at $44.80 in race six, and Zoombadaboom at $21.40 in race eight. . . Brilliant Bird ($11.80) made a nice debut Sunday for trainer Terry Gillihan and owner Ron Crockett, drawing off for a 3 ¾-length victory in a $18,500 maiden special weight for 2-year-old fillies. Ridden by Bowen, Brilliant Bird (Einstein-Clever Bird) ran six furlongs in 1:10.07. . .The Western Hockey League champion Seattle Thunderbirds visited Emerald Downs Sunday and the championship Ed Chynoweth Cup was on display throughout the building. . .Rockport Birdie, bidding for her seventh win of the meet, finished fourth as Winniningfashion ($10.60) led gate-to-wire under Isaias Enriquez in race seven. . .Rockport Birdie remains tied with Wine At Nine for most wins at the meet with six apiece. . .Trainer Scott Freeman won his second race in two days as Sierra Romance notched the 21-1 upset under Erick Lopez . . .Live racing continues Saturday with first post 5 p.m. and features a $8,530 carryover in the $0.50 Pick 5 and $3,013 in the $0.20 Pick 7.
–##–