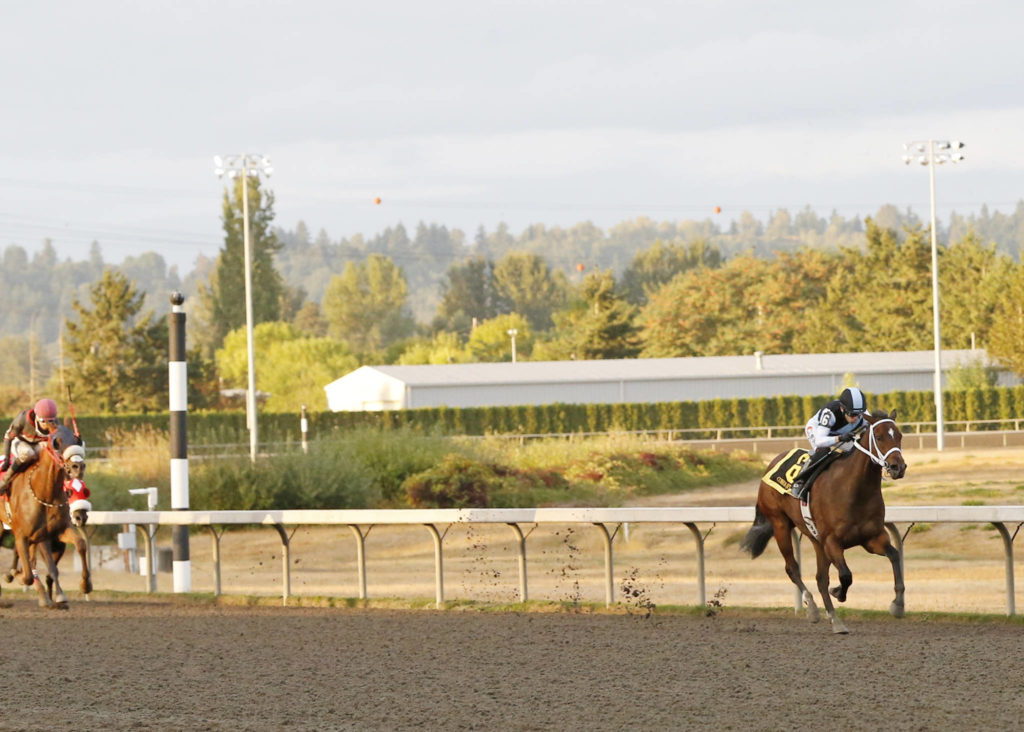 AUBURN, Wash. (Sept. 12, 2021) – Cobra Jet overtook A View From Above into the lane and drew clear for a 5 ¼-length victory over Diamond Willow in Sunday’s $50,000 Washington Cup Juvenile Colts and Geldings Stakes at Emerald Downs.

Ridden by Juan Gutierrez at 121 lbs, Cobra Jet ran 6 ½ furlongs in 1:17.28 and paid $4.80 as second choice in a field of six. Frank Lucarelli is the winning trainer and co-owner with Roy Schaefer and Eclipse Thoroughbred Partners.

Cobra Jet stalked A View From Above through fractions of :21.85 and :44.35 for the quarter and half-mile, engaged from the outside into the lane and blew past the 1 to 2 betting favorite and powered home for a convincing victory.

A Washington-bred by Curlin to Mischief-Atta Gal Val, Cobra Jet earned $27,500 for the win and boosted his career total to $65,918. The dark bay or brown gelding is 3-1-0 in four starts including stakes victories in the King County Express and Washington Cup. His three wins have all been blowouts: 6 ¾, 13 ½ and 5 ¼ lengths.

The victory also turned the tables from the WTBOA Lads Stakes three weeks ago in which A View From Above raced to a 1 ¼-length victory while handing Cobra Jet his first career loss.

Diamond Willow, an 18 to 1 longshot, ridden by Alex Cruz, closed ground late to finish second while A View From Above weakened in the stretch and finished third.

A View From Above had been undefeated before Sunday, scoring gate to wire victories in a maiden special weight and the WTBOA Lads Stakes.

Closing out the order of finish were Big Paper Daddy, Hickory Wind and Neumeister. Tiger Mountain was scratched.

The $50,000 Gottstein Futurity is the final stakes race of the season for 2-year-olds at a mile and a sixteenth on closing day, Sunday, September 26. 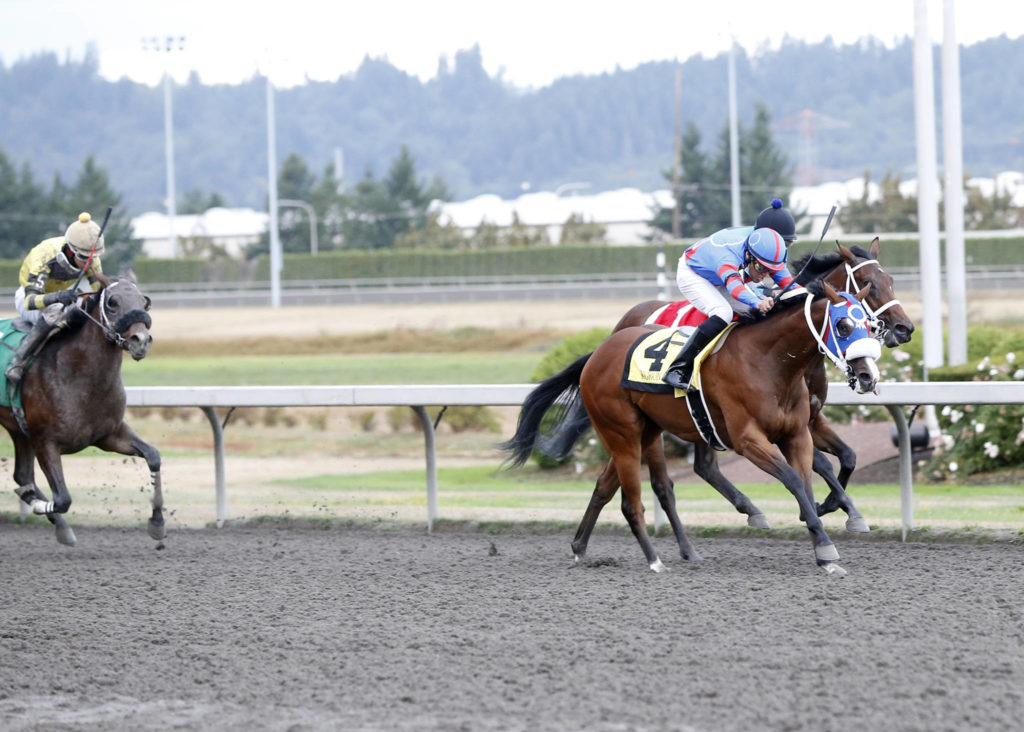 Koron (No. 4) and jockey Kevin Orozco

With Kevin Orozco riding at 120 lbs, Koron outdueled Gold N Glitter in a nip and tuck battle through the stretch, finally edging clear in the final yards for the victory.

Koron covered 6 ½ furlongs in 1:19.10 and paid $3.40 as the odds-on choice in a field of five. Kay Cooper is the trainer for the Blue Ribbon Racing Ladies syndicate headed by Debbie Pabst of Buckley, Wash.

A Washington-bred by Nationhood-Muchas Coronas, Koron is now three for three including consecutive stakes victories in the Barbara Shinpoch Stakes and Washington Cup. She earned $27,500 for Sunday’s triumph, boosting her bankroll to $65,918.

Let It Reign, a maiden ridden by Alex Cruz at 120 lbs, rallied from last to edged Gold N Glitter by a head for second, while Cadillac Margarita and Pontiffany completed the order of finish.

Gold N Glitter, second choice at 7 to 5, set fractions of :22.33 and :44.92, battling back when headed by Koron in the stretch, but weakened late and just missed holding second.

Orozco now has a meet-high five stakes victories this season—three on 3-year-old Top Executive and two aboard Koron.

Cooper and Blaine Wright are tied for first in trainers’ stakes wins with four apiece.

NOTES: Mutuel handle totaled $1,615,065 on a 10-race card. . .Multiple stakes winner Daffodil Sweet was back on track with a one-length victory over Dontkissntell in a $24,750 allowance dash for older fillies and mares, running six furlongs in 1:09.35 under Juan Gutierrez. A 4-year-old Ministers Wild Cat filly owned by One Horse Will Do Corporation and Steve Shimizu, Daffodil Sweet is 7 for 10 lifetime with earnings of $119,271. . .Gutierrez and Alex Anaya rode three winners each while Alex Cruz had two wins. . .With four days left in the season, the jockeys’ race is extremely tight. Cruz and Julien Couton are tied for first with 68 wins apiece while Gutierrez is right behind with 65 wins. . .Jorge Rosales was the only trainer with two wins Sunday. . .Joe Toye tops the trainers’ standings with 27 wins followed by Frank Lucarelli with 23 wins and Rosales with 20. . .Iknowyourface ($11.80) made it three front-running scores in a row, holding off Fortune’s Freude in a $15,000 optional claimer for older fillies and mares at one mile. A 6-year-old Tricky Trevor mare, Iknowyourface is 13 for 45 lifetime and currently owned by Richard Degraw and trained by Michael Bullene. . .Live racing resumes Saturday with first post 6:30 p.m.
–##–