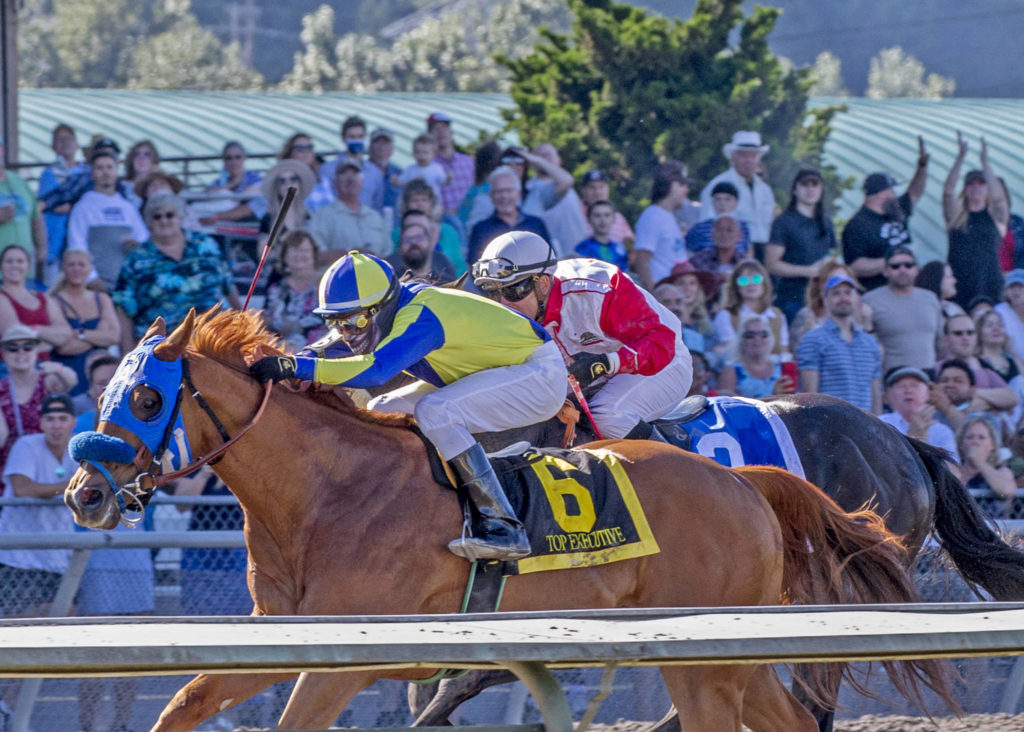 Top Executive holds off Big Duke in the Auburn Stakes

AUBURN, Wash. (June 20, 2021) – Top Executive held off Big Duke in a driving finish and scored a three-quarter-length victory Sunday in the $50,000 Auburn Stakes for 3-year-old colts and geldings at Emerald Downs.

Ridden by Kevin Orozco at 121 lbs, Top Executive ran six furlongs in 1:09.51 and paid $6.80 as the third betting choice. The winner, a Kentucky-bred gelding by Street Boss, is trained by Blaine Wright and owned by Gail and Gerald Schneider and John and Janene Maryanski.

The winner advanced three-deep on the turn, overhauled Kowboykabin into the stretch, and held off a late challenge from Big Duke.

Big Duke, ridden by Julien Couton at 123 lbs, rallied from last and made a strong bid in mid-track, but could not get by Top Executive late. The 6 to 5 betting favorite, Big Duke continued his excellent 2021 campaign. A California-bred by Phantom Wildcat, Big Duke is 3-3-0 in six starts this year with earnings of $99,288.

Dutton, the 2019 Emerald Downs’ Horse of the Meeting, reared in the starting gate and was scratched. Dutton, who was 4 to 5 before the incident, had a similar occurrence before what would have been his career debut last July.

With the victory by Top Executive, Wright now has 46 career stakes wins at Emerald Downs including 32 since the start of 2017. 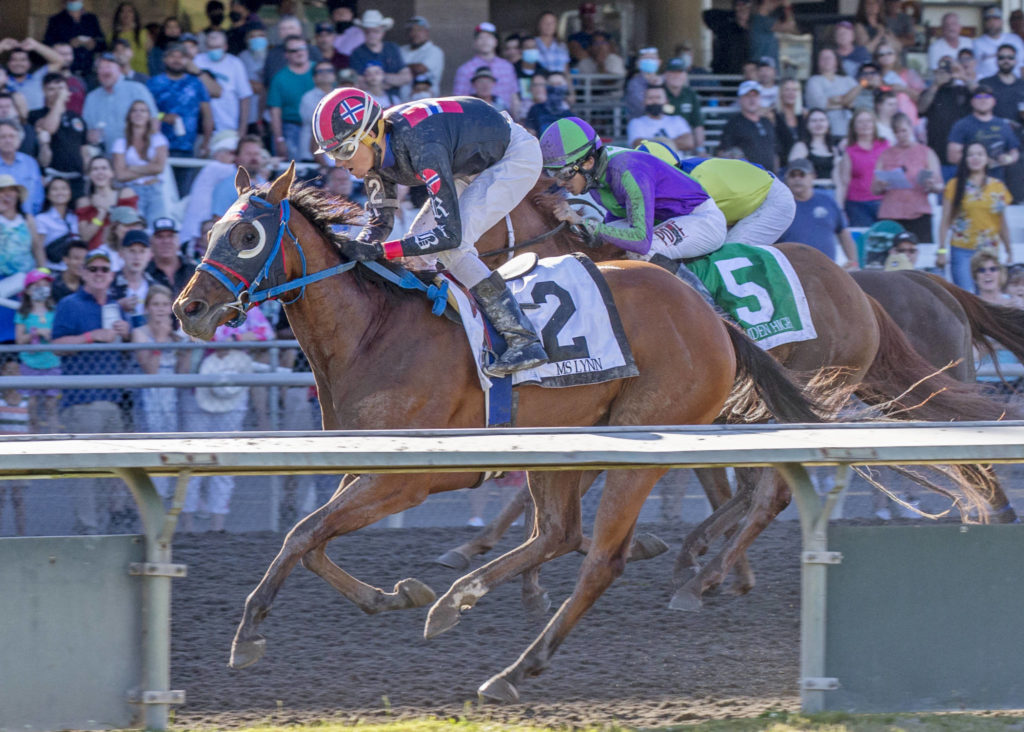 Ms Lynn and Alex Cruz prevail in the Seattle Stakes

In the $50,000 Seattle Stakes for 3-year-old fillies, long shot Ms Lynn staged an extraordinary rail rally and scored a 1 ½-length victory over Camden High in 1:10.14 for six furlongs.

Ridden by Alex Cruz at 120 lbs, Ms Lynn paid $37.80 as sixth choice in the field of 10. Roy Lumm is the winning trainer for owner/breeder Ron Bohlman of Puyallup, Wash., who also works as a security guard at Emerald Downs.

Camden High, ridden by Alex Anaya at 122 lbs, rallied from next to last to finish second at odds of 21 to 1. A Washington-bred by Liberty Gold, Camden High has finished runner-up in her last four starts dating to last year.

Gayles Evening, the 2 to 1 favorite, was forwardly placed early but weakened in the stretch run.
The $50,000 Kent Stakes at 6 ½ furlongs is next for 3-year-old fillies on Sunday, July 25. 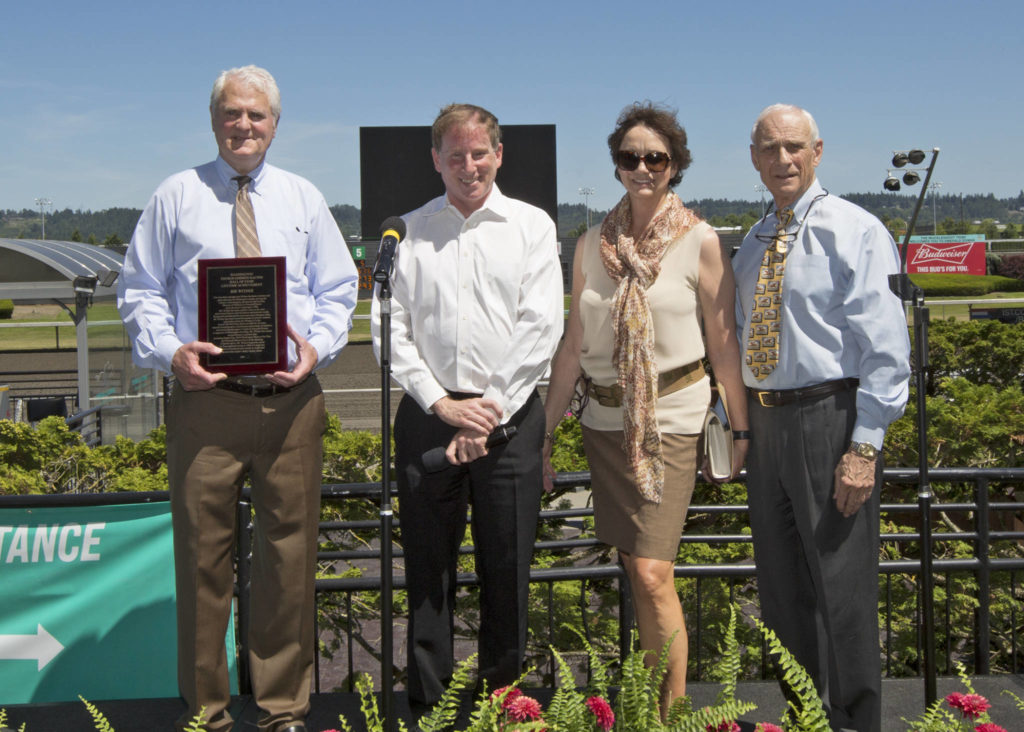 Joe Withee, Director of Publicity at Emerald Downs since the track’s opening in 1996, was inducted into the Washington Racing Hall of Fame in a surprise ceremony before the day’s races.

In making the presentation Emerald Downs founder Ron Crockett noted “Withee has been a tireless and great advocate for Washington racing while serving the industry with integrity, distinction and nobility.”

A Seattle native, Withee has interviewed thousands of owners, trainers and jockeys from the winner’s circle, hosted The Win Place Show on KJR 950 AM for 24 years, emceed numerous press conferences and award ceremonies.

A supporter of Washington breeding, Withee has owned several horses in partnership including Sippin Fire, 2018 Washington Horse of the Year and Emerald Downs Horse of the Meeting.