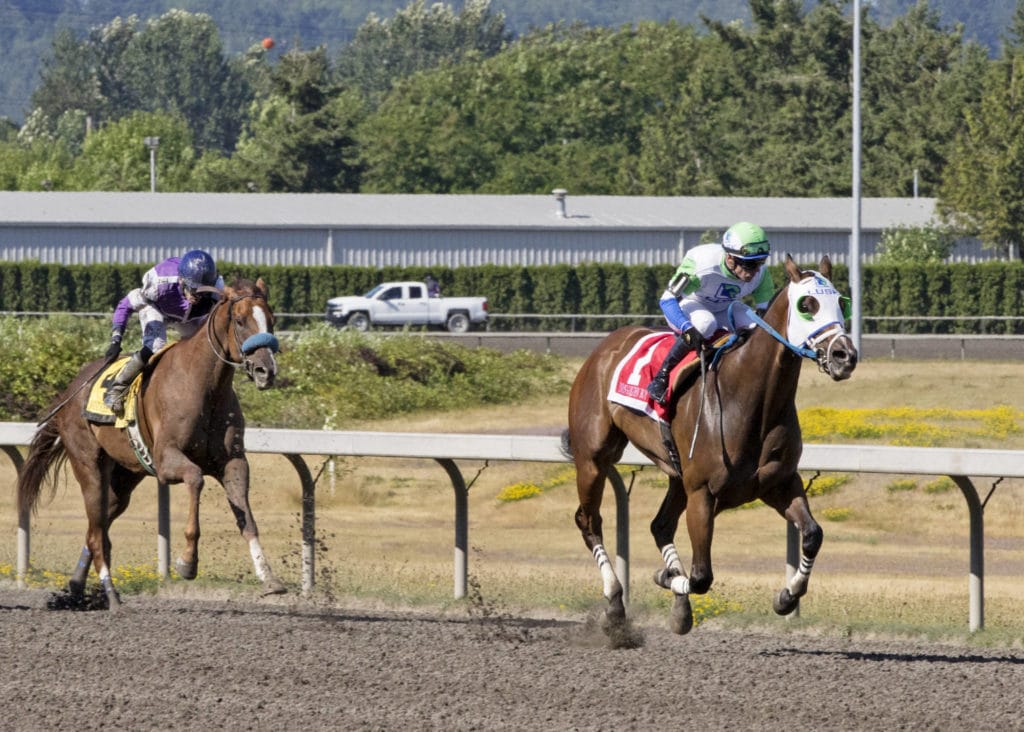 AUBURN, Wash. (July 11, 2021) – Papa’s Golden Boy utilized his brilliant speed and score a gate to wire 2 ½-length triumph over Unmachable in the $50,000 Governor’s Stakes for 3-year-olds and up Sunday at Emerald Downs.

With the victory, Papa’s Golden Boy is three for three at the meet including two stakes wins and becomes the local favorite for the 86th running of the $100,000 Longacres Mile (G3) on Sunday, Aug. 15.

Breaking from the No. 1 post-position, Papa’s Golden Boy sprinted to the lead immediately and ran a leisurely opening quarter mile of :22.18, practically guaranteeing the gelding would be tough to overhaul Sunday. The winner opened a 2 ½-length advantage on Windribbon around the turn, running the half in :43.85, and was 3 ½ lengths clear into the stretch. The outcome was never in doubt from there, as Papa’s Golden Boy had plenty in the tank to hold a late charge by Unmachable.

A 5-year-old Washington-bred by Harbor the Gold-Brookie Girl, Papa’s Golden Boy has a lifetime record of 6-2-0 from 14 starts with earnings of $115,030, including $27,500 for the Governor’s victory. Vince Gibson is the winning trainer for owners Gary Lusk, Deborah Lusk, Jeff Lusk and Peyton Lusk.

Unmachable, ridden by Javier Matias at 120 lbs, rallied from sixth to snatch second at odds of 11 to 1, while Windribbon, ridden by Juan Gutierrez held third. Rounding out the order of finish were Take Charge Deputy, Muncey and Collusionist. Baja Sur, Washington Horse of the Year in 2019, fell in deep stretch and appeared to sustain a serious injury to his right front leg. 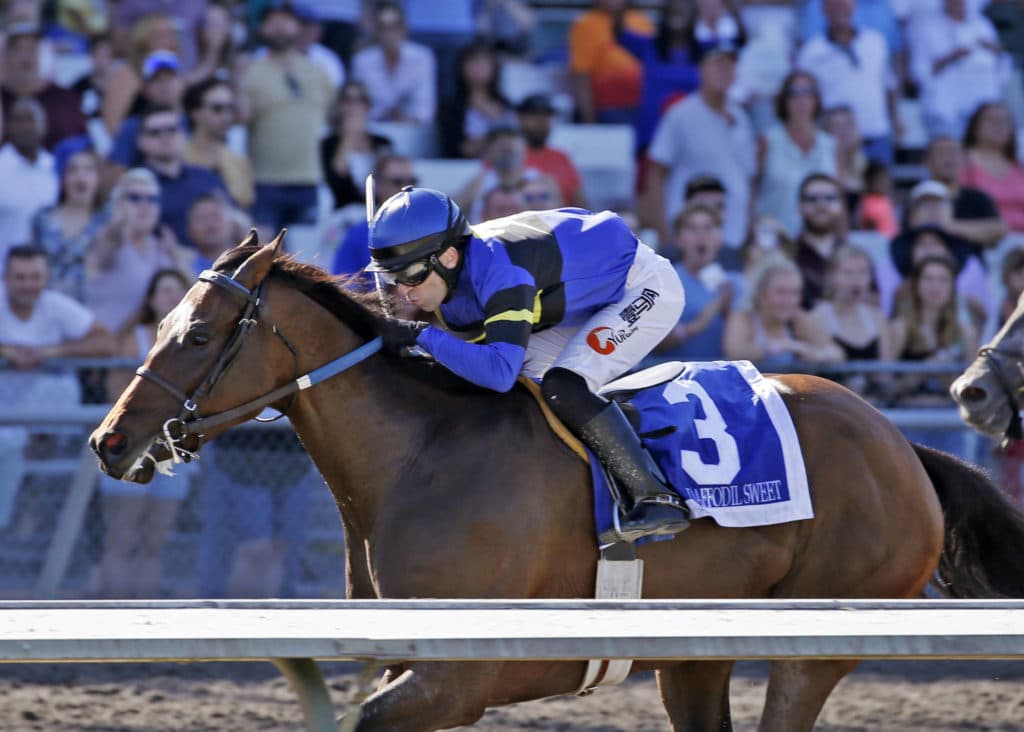 Back on track after a rare misfire in the Hastings Stakes last month, Daffodil Sweet overhauled Ima Happy Cat in the stretch and scored a 2 ½-length victory over Dontkissntell in the $50,000 Washington State Legislators Stakes for older fillies and mares.

Ridden by Juan Gutierrez at 119 lbs, Daffodil Sweet covered 6 ½ furlongs in 1:15.19 and paid $8.80 as third choice in the wagering. Chris Stenslie is the winning trainer for owners Jody Peetz of Issaquah and Steve Shimizu of Bellevue.

A 4-year-old California-bred by Ministers Wildcat, Daffodil Sweet earned $27,500 and is 5-0-1 in seven career starts with earnings of $91,545. Her only losses were a second in the mile and a sixteenth in the 2020 Washington Oaks and a seventh in the Hastings, when she completely missed the break and never was involved as the 9 to 10 favorite.

Daffodil Sweet got away cleanly Sunday, stalking Ima Happy Cat through fractions of :21.81 and :43.88, gaining command a quarter mile from home and drawing off through the lane.

Ima Happy Cat, the 5 to 2 betting favorite ridden by Julien Couton at high weight of 123 lbs, weakened slightly to finish fourth. The 6-year-old gray was bidding for a second straight stakes victory and her fourth overall at Emerald Downs.

NOTES: Total mutuel handle was $1,880,999 on the nine-race card. . .Harbor the Gold now has 70 stakes wins as a sire at Emerald Downs. Slewdledo is second with 27. . .2-year-old gelding A View From Above ($6.60) debuted with a romping victory in Sunday’s $20,350 maiden special weight, running five furlongs inn :57.63 for trainer Kay Cooper and owners Grasshopper Racing Stables and Doug Stenberg. A Washington-bred by Abraaj, A View From Above is the sixth winning foal out of Deja Views. . .In another impressive 2-year-old debut, Gold N Glitter ($5.87 0) ran 4 ½ furlongs in :50.93 while easily scoring in a $25,000 maiden claimer for trainer Frank Lucarelli and owners Chad and Josh. By Harbor the Gold-Minimums Minimums, Gold N Glitter’s winning time is the fastest 4 ½ furlongs of the meet, besting a :51.04 by Lucarelli trainee Cobra Jet. . .With victories Sunday, 6-year-old mare Judicial ($4.80) and 4-year-old gelding Atta Boy Billy joined the list of triple winners at the meet. . .Alex Cruz made it 44 straight days with at least one win by taking the Sunday opener with Reno Roy ($5.40). . .Julien Couton rode three winners and trails Cruz 37-32 on the jockeys’ leaderboard. . . Javier Matias also had three wins and is one win shy of 600 at Emerald Downs. . . Juan Gutierrez rode two winners—his sixth consecutive straight multiple win day. His 69 Emerald Downs stakes wins rank third behind Gallyn Mitchell (80) and Ricky Frazier (72). . .The $0.20 Jackpot Pick Six carryover is up to $20,427. . .Live racing resumes Thursday with first post 6 p.m.
–##–