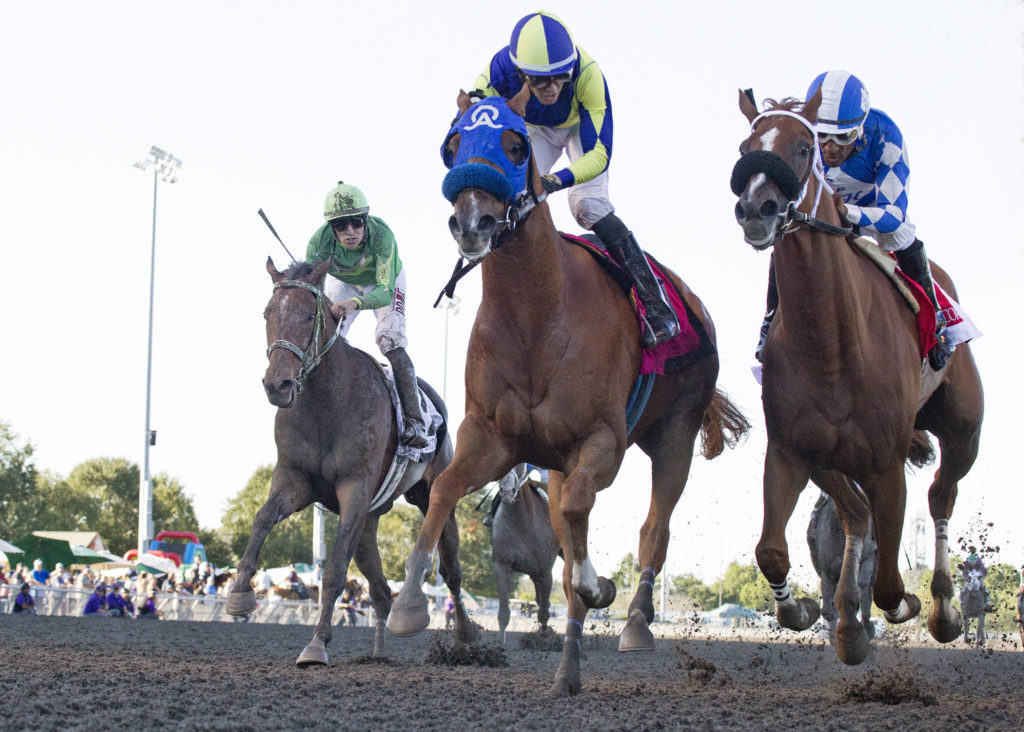 Ridden by Kevin Orozco at 123 lbs., Top Executive ran a mile and one-sixteenth in 1:42.25 and paid $5.80 as the betting favorite. With the victory, Top Executive completed a season sweep of the 3-year-old colts and geldings division at Emerald Downs, winning in order the Auburn Stakes at six furlongs, Irish Day Stakes at 6 ½ furlongs and Muckleshoot Derby at eight and a half furlongs.

A Kentucky-bred by Street Boss, Top Executive earned $27,500 to boost his career bankroll to $115,198. His overall record is 5-0-0 in eight starts including four stakes victories at Emerald Downs. Blaine Wright, now tied with Bud Klokstad for fourth all-time with 46 stakes wins at Emerald Downs, is the winning trainer.

“(Top Executive) wanted to get to the lead and I had to kind of strangle him early,” Orozco said. “He was pulling me forward and I just let him go. It was a tough race, the other horse kept battling too.”

Coastal Kid, the 3 to 1 third choice ridden by Wayne Barnett at 123 lbs., did everything but win the race. Despite setting fast early fractions the son of Coast Guard was resilient through the lane, battling head and head with Top Executive every inch of the stretch run before settling for second.

John Loftus of the Muckleshoot Indian Tribe presented the winning trophy to the owners in the winner’s circle. 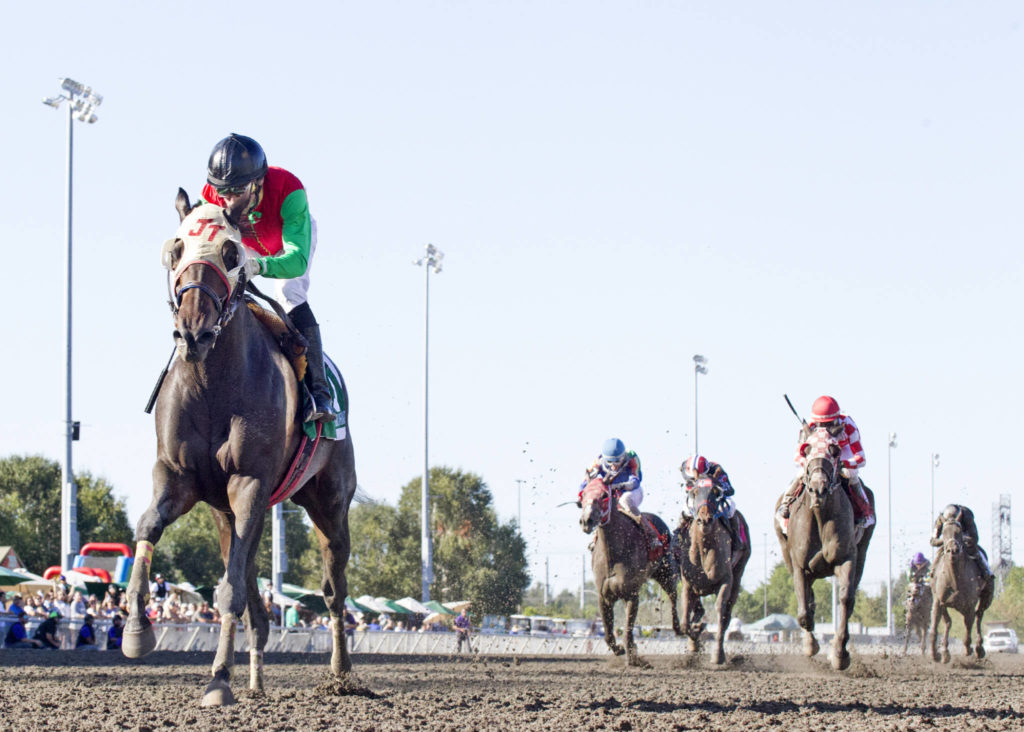 Canadian shipper Bayakoas Image powered to the lead into the stretch and drew off for a 5 ¾-length victory in the $50,000 Washington Oaks for 3-year-old fillies.

Ridden by Alexander Marti at 121 lbs. Bayakoas Image covered the mile and one-sixteenth in 1:42.74 and paid $7.80 as the second choice in the wagering. Kay Cooper handled saddling chores at Emerald Downs for owners Brian O’Connell and Joanne Todd of Vancouver, British Columbia.

The winner stalked Curious Sensation through six furlongs in 1:11.99, took command a quarter mile from home and drew off to win with complete authority.

“When I asked her at the quarter-pole, she flew home,” Marti said. “She’s such a good filly.”

A British Columbia-bred by Lent, Bayakoas Image won three of four starts this summer at Hastings Racecourse including a recent allowance victory at Sunday’s Oaks distance. Her overall record is 4-2-0 from seven starts with earnings of $71,994 including $27,500 for Sunday’s triumph.

Broad Approval, the 2 to 1 favorite ridden by Leslie Mawing at 121 lbs., rallied from eighth to take second place for trainer Sandi Gann and owner Glen Todd. A Daughter of Carpe Diem, Broad Approval finished runner-up to Bayakoas Image twice this summer at Hastings and most recently second to Blazingbellablu in the Kent Stakes at Emerald Downs.

Ms Lynn, a 16 to 1 outsider ridden by Julien Couton at 121 lbs, edged Blazingbellablu for third place.

Blazingbellablu, co-second choice at 5 to 2, had her three-race winning streak snapped while settling for fourth. Rounding out the order of finish were Our Lyla Grace, Curious Sensation and Stellaczar (dead heat for seventh), La Una, Aquinas, and Street Shadow.

Tempered Steel, dam of Bayakoas Image, was a triple stakes winner at Hastings Racecourse while Marti currently ranks third with 31 wins at the Vancouver track.

NOTES: Mutuel handle totaled $1,601,337 on the 10-race card. . .Rocco Bowen rode three winners Sunday and has tripled both days he’s ridden here this season. . .Trainer Sylvia McCready scored her first career Emerald Downs victory with Appointed Star ($6.20) in the 10th race. . .Four of Kevin Orozco’s six wins this season are in stakes—three on Top Executive and one on 2-year-old filly Koron. . .Bowen rode Take Charge Deputy ($5) to a one-length victory over Catfish Hunter in a $20,9000 allowance for 3-year-olds and up. The winner covered 6 ½ furlongs in 1:16.27. . . Bidding for career victory No. 27 at Emerald Downs, Mike Man’s Gold settled for fourth as Crest Drive ($22.40) prevailed in 1:10.26 for six furlongs. . .With 10 days remaining in the 2021 season, defending champion Alex Cruz leads Julien Couton 64-63 in the riders’ standings. . .In the trainers’ race, Joe Toye owns a 23-21 lead on two-time defending champion Frank Lucarelli. . .Live racing resumes Thursday with first post 6 p.m.
–##–