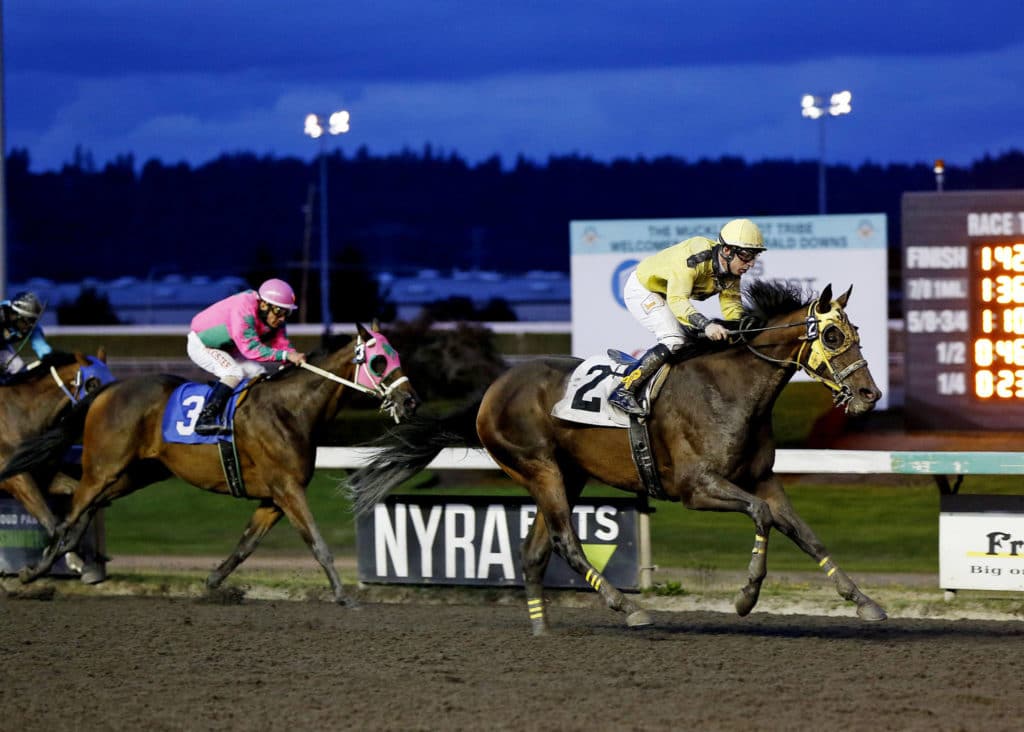 A 7-year-old California-bred by Decarchy, Awesome Return has three wins at the meet and improved to 8-7-6 in 42 career starts with earnings of $458,476. The bay gelding won three stakes in 2014 including the $250,000 Snow Chief at Santa Anita in which Alert Bay finished third.

Long Game, longest shot on the board at 30 to 1, finished third under Patrick Henry Jr. and paid $6.20, while Jackson Teller, Ryan Walt, My Chief and Credit Line rounded out the order of finish.

NOTES: Rocco Bowen was off his mounts following a training mishap Saturday morning. Bowen, the meet’s leading with 97 wins, hopes to resume riding Sunday. . .Mr. Frank ($6.60) prevailed in the $18,500 maiden special weight for 2-year-olds, running 5 ½ furlongs in 1:03.48 and withstanding a stewards’ inquiry and trainer’s objection for the victory. The winner, a Kentucky-bred by Blame-La Lodola, was ridden by Javier Matias for Frank Lucarelli and co-owners Chris Randall, Nick Rossi, Dennis Snowden. . .Party for One ($11.80) scored his fourth win of the meet, rallying to take race three under Leonel Camacho-Flores for trainer Rigoberto Velasquez. Party for One is a 5-year-old Washington-bred by Desert Party. . .Trainer Larry Ross saddled Candorosa ($13.20) and Zanab to a one-two finish in the Saturday opener. The winner, a 5-year-old Harbor the Gold mare, and the runner-up, a 7-year-old Kitalpha mare, are both triple winners at the meeting. . .Trainer Chris Stenslie also had a cold exacta with Uzta Have Money ($6.60) and Only the High Road in race five. . .Eight different jockeys and trainers had victories on the eight-race card, with Party for One the lone winner to pay double digits. . .Lots of stakes action Saturday at Hastings in Vancouver: Sky Promise ($4.70) collared Weekend Wizard late to win the $150,000 BC Derby in 1:51.71 for 1 1/8 miles; Here’s Hannah ($3.80) led gate-to-wire in the $100,000 BC Oaks, and Emerald Distaff winner Reginella ($8) held off Notis the Jewell in the $50,000 Delta Colleen Handicap for older fillies and mares, with Top Quality finishing third. . .Live racing continues Sunday with first post 2 p.m., featuring the $50,000 Muckleshoot Tribal Classic for 3-year-olds and up and $50,000 WA Cup Filly & Mare. Also Sunday, the 2018 Washington Hall of Fame induction ceremony will be held prior to the first race.