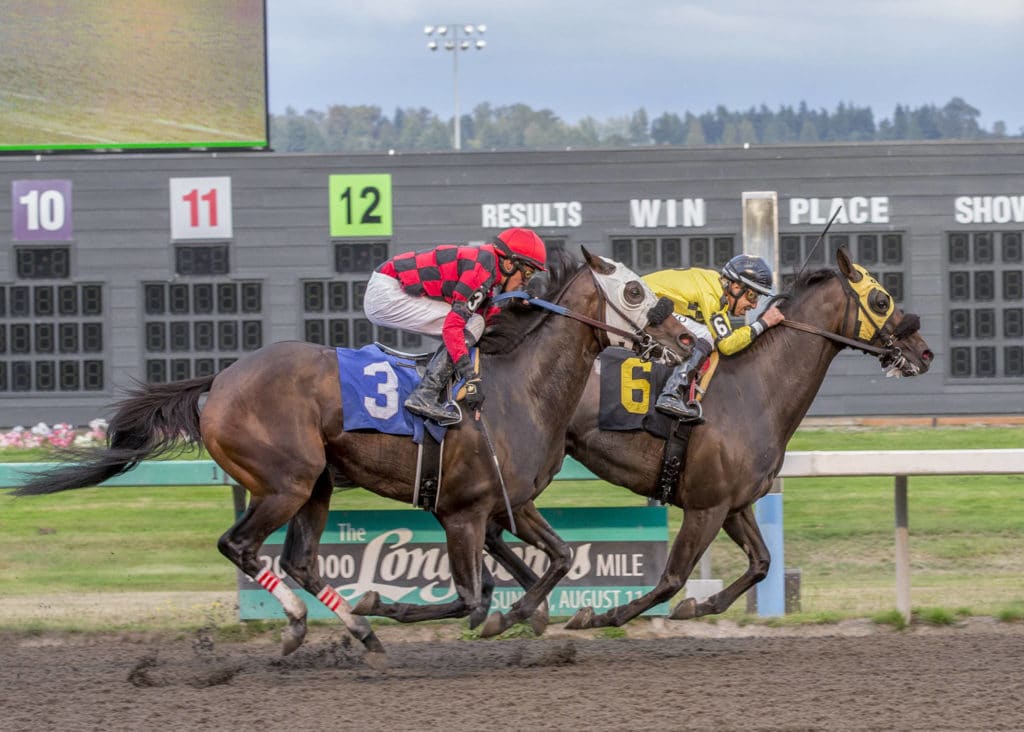 Party for One and jockey Gary Wales

PARTY FOR ONE, OLDTIMERS VISION PREVAIL IN DISTANCE SERIES

Party for One continued his winning ways in the $14,000 first division, holding off Tiz Brilliant for a half-length victory in 2:05 for 1 1/14 miles. And Oldtimers Vision wore down Thorn Legacy for a neck victory in 2:05.48 in the second division.

Ridden by Lorenzo Lopez for owner John Parker and trainer Candi Cryderman, Party for One paid $6 as a slight choice in the wagering. The 6-year-old Desert Code gelding now has 13 wins in the last two years—eight in 2018 and five in 2019—including the first two legs of the marathon series. His lifetime mark is 14 for 54 with earnings of $89,947, including $7,700 for Saturday’s win.

Ridden by Javier Matias for owner Dean Mazzuca and trainer Frank Lucarelli, Oldtimers Vision paid $5 as the betting favorite. The 8-year-old Pollard’s Vision gelding has a win and a second in the first two legs of the series, and is 14 for 72 lifetime with earnings of $152,887

And once again, claiming activity was hot and heavy. Party for One and fourth-place finisher Cook Up a Storm were claimed from the first division, and sixth place finisher Awesome Return was claimed from division two, all for $8,000.

The final leg of the series at 1-½ miles will be run Saturday, September 21, under starter allowance conditions.

Lucarelli and Christensen clicked with Ballerina Headline ($25,40) in race two and Freiburg ($9.80) in race six, and polished off the triple with Oldtimers Vision in the second division of the WHBPA & WTBOA Horsemen Helping Horsemen Distance Series. Lucarelli is averaging over a win a day, and Saturday marked his seventh three-win day this season.

Christensen has 24 wins, tied for the second highest single-season total in track history. He needs four wins in the final 10 days to eclipse the record of 27 wins set by Swag Stables in 2009.