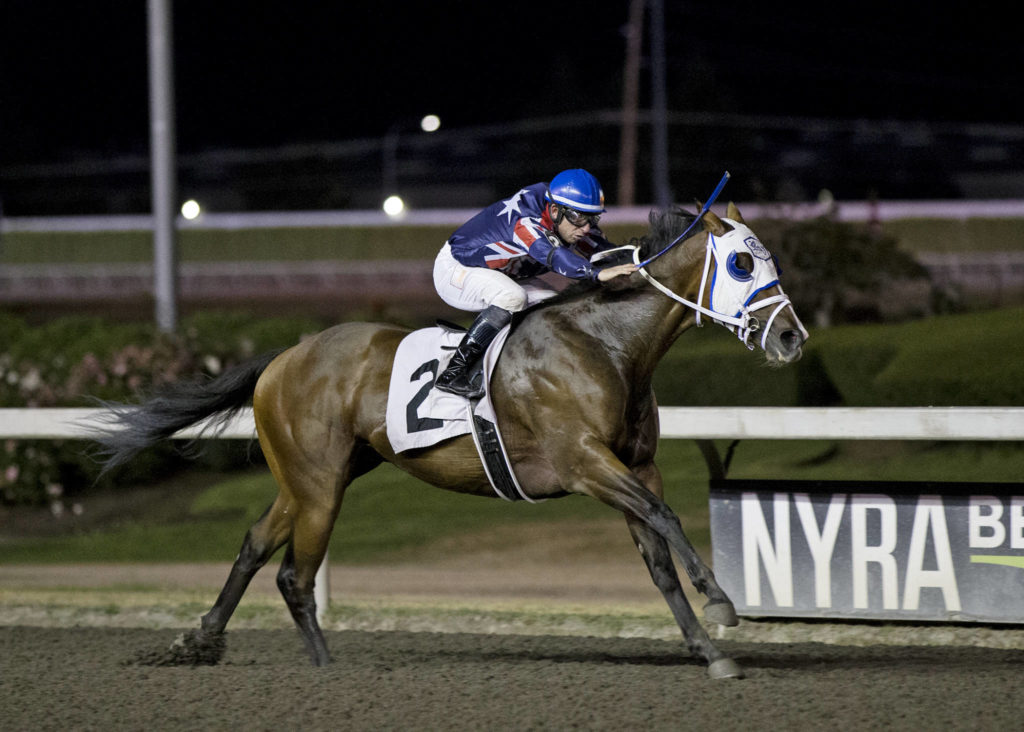 Stand To and Julien Couton

STAND TO ALL THE WAY IN SATURDAY NIGHT FEATURE

With Julien Couton riding his second winner on the card, Stand To ran six furlongs in 1:09.50 and paid $8.20 as third choice in the field of seven. Rigoberto Velasquez is the trainer for winning owner/breeder John Sneesby.

Franks Fix It, ridden by Juan Gutierrez, chased the winner gate to wire and settled for second place. The 3-year-old Gold Aly gelding was making his first start against winners off a one-mile maiden victory four weeks ago.

Time ‘n Time Again rallied from far back to finish third, the 17th in the money finish in 25 starts for the older brother of WTBOA Lads Stakes winner A View From Above.

Rounding out the order of finish were Long Lance, 5 to 2 favorite Forty Smooches, American Buddha and Lochness.

NOTES: Mutuel handle totaled $871,290 on a seven-race program. . .Howard Belvoir became the third trainer with 800 wins at Emerald Downs, scoring the milestone with 2-year-old Larsen Bay ($19.40) in Saturday’s third race. Frank Lucarelli (1,087 wins) and Tim McCanna (955) are others to reach the milestone. . .Julien Couton’s win on Stand To is his 300th at Emerald Downs and vaulted him into a first place tie with Alex Cruz atop the riders’ standings. . .Cruz, however, won the nightcap on Sparkling Lute ($3.60) and begins Sunday with a 63-62 lead. . .Couton, Leslie Mawing and Juan Gutierrez each rode two winners Saturday. . .11-year-old City Steel ($10.40) prevailed in the opener and now has wins at nine different tracks beginning at the Fair Grounds on December 1, 2013. . .Live racing continues Sunday with the $50,000 Muckleshoot Derby for 3-year-olds and $50,000 Washington Oaks for 3-year-old fillies. First post 2:30 p.m.
–##–