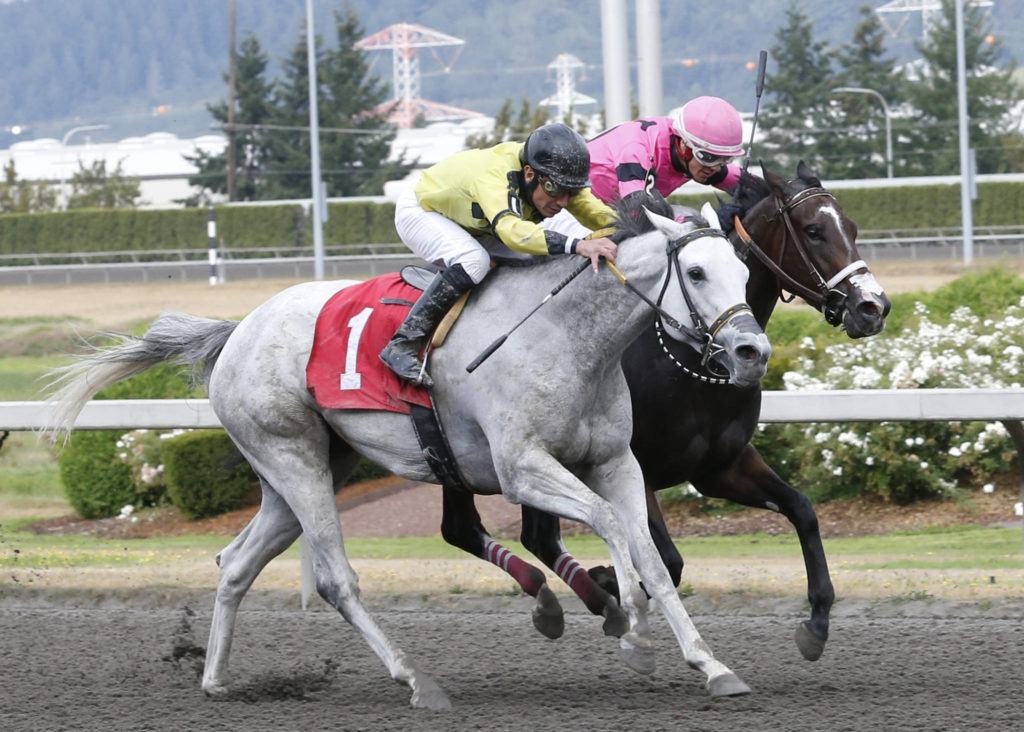 Prospera (No. 1) surges to victory in Saturday’s feature race.

Ridden by Javier Matias, the razor-sharp Prospera ran six furlongs in 1:09-1 and paid $5.20 as the betting favorite. Candi Cryderman saddled the winner for John Parker, the runaway leader in the owners’ standings with 21 wins.

In third as Fire Escape set fractions of :21.71 and :44.26, Prospera gradually reeled in the runaway leader and collared her in the shadow of the wire.

Fire Escape, ridden by Alex Cruz, did everything but win the race. The lone 3-year-old in the field, she owned a two-length lead into the lane and dug in when challenged, only yielding in the final yards.

Unsinkable Molly B was 5 ¾ lengths back in third while Oreo’s Dream and You Go Girl completed the order of finish.

Dontkissntell, the 8 to 5 morning line favorite, was scratched earlier in the day.

NOTES: Total mutuel handle was $833,769 on an eight-race card. . .Alex Cruz rode three winners to open a 10-length lead—76-66—over Kevin Radke atop the jockeys’ standings. The two-time defending riding champion established a career-high for wins at Emerald Downs; Cruz rode 72 winners in 2020, and 75 in 2021. . .Red Noon Rising ($5.20) won a cavalry charge to the wire to prevail in race six for her third straight victory while denying Willing to Burn her fifth win of the meet. . .Hunters Ghost ($17) made it three wins in four starts, tagging long shot After the Candy in race five. A 3-year-old Shaman Ghost gelding, Hunters Ghost is 3-1-0 in four starts since July 15. . .Owner/trainer Sergio Perez scored his second double in three weeks, winning with Mileys Bluecat ($7.40) and Hunters Ghost. In his last 17 starts, Perez is a glossy 5-5-2. . .Live racing resumes Sunday with four stakes races—two Thoroughbred, two Quarter Horse—on Weiner Dog day at Emerald Downs. First post 2:15 p.m.