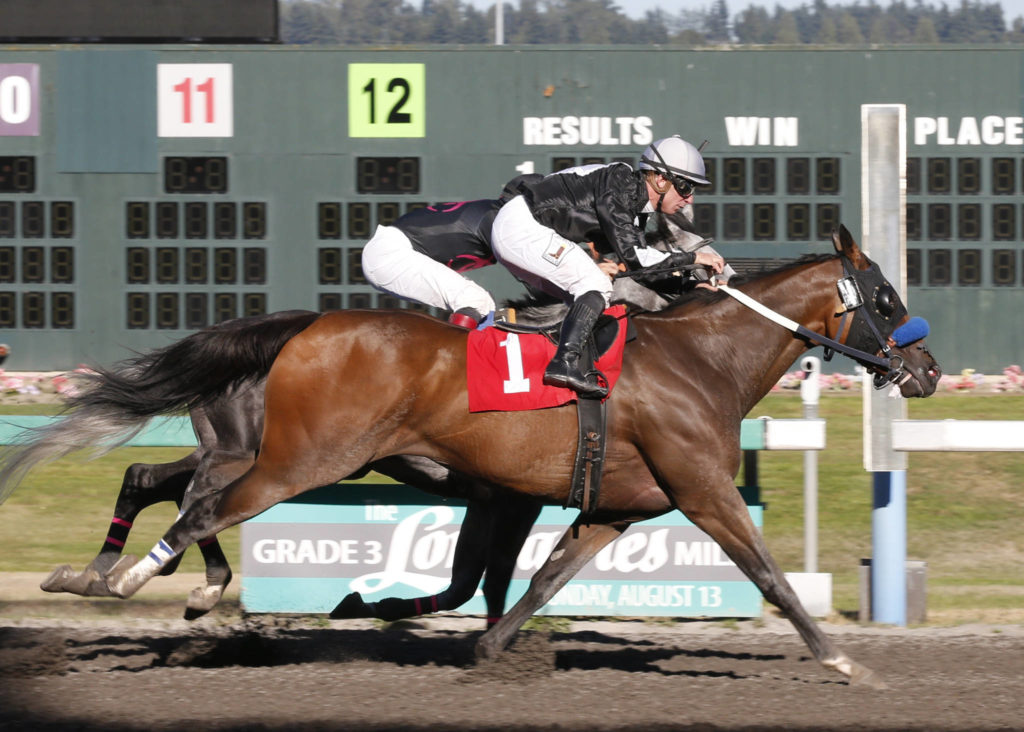 Oh Marvelous Me edges Papa Frank at the finish line

Papa Frank, ridden by Jose Zunino, swerved out past mid-stretch and then just failed to hold off the winner in the final yards. Papa Frank paid $3.20 and $2.40.

Grinder Sparksaglo, ridden by Eswan Flores, held third and paid $2.60 to show, while Togrammashousewego, Opportunistic and Thisdewarsforyou completed the order of finish. The Press was scratched and runs in Sunday’s $50,000 Muckleshoot Tribal Classic for 3-year-olds and up.

A 5-year-old Kentucky-bred gelding by Bluegrass Cat-Morakami, Oh Marvelous Me thrives at Emerald Downs. He is one of only seven four-time winners at the meet and is 5-0-2 in eight starts at Emerald Downs with $48,928 in earnings.

NOTES: Couton and Wright also clicked with Im Insatiable Too ($4), a 2-year-old Abraaj gelding that edged Cody’s Check in a $25,000 maiden claimer. . .Couton and Wright are a combined 13-for-29 this season. . .Couton also won the nightcap on Blushing Ann ($16.60) to notch his sixth three-win day of the season. . .Rocco Bowen also rode three winners Saturday, boosting his season total to 103. . .Betrbegone ($7) scored a gate-to-wire victory first off the claim for Greg and Chuck Conley and Joe Toye, running one mile in 1:35.88 under Bowen in race four. A 5-year-old Parker’s Storm Cat gelding, Betrbegone snapped a nine-race skid that dated to 2015 and a 33-1 upset over Prime Engine in the Seattle Slew Handicap. . .Toye and the Conleys are a remarkable 12-for-20 this season, and rank second to John Parker (16 wins) in the owners’ standings. . .Trainer Dino Apostolou broke into the win category as La Javier ($22.80) rallied under Francisco Orduna-Rojas to take the Saturday opener. . .Incidentally, Orduna-Rojas also won the Friday opener on Midnight Lou. . .Trainer Steve Koler also scored his first win of the season when Three Red Sevens ($11.40) tagged 2-5 favorite Alaskan Cruise in the final stride of race six. . .Party Pooper ($2.80)  is a three-time winner for the second straight year following a gate-to-wore score in race seven for older $10,000 claimers. . .Live racing continues Sunday with the Washington Cup, six stakes worth an aggregate $300,000 in purses for Washington-breds. First post is 2:30 p.m.