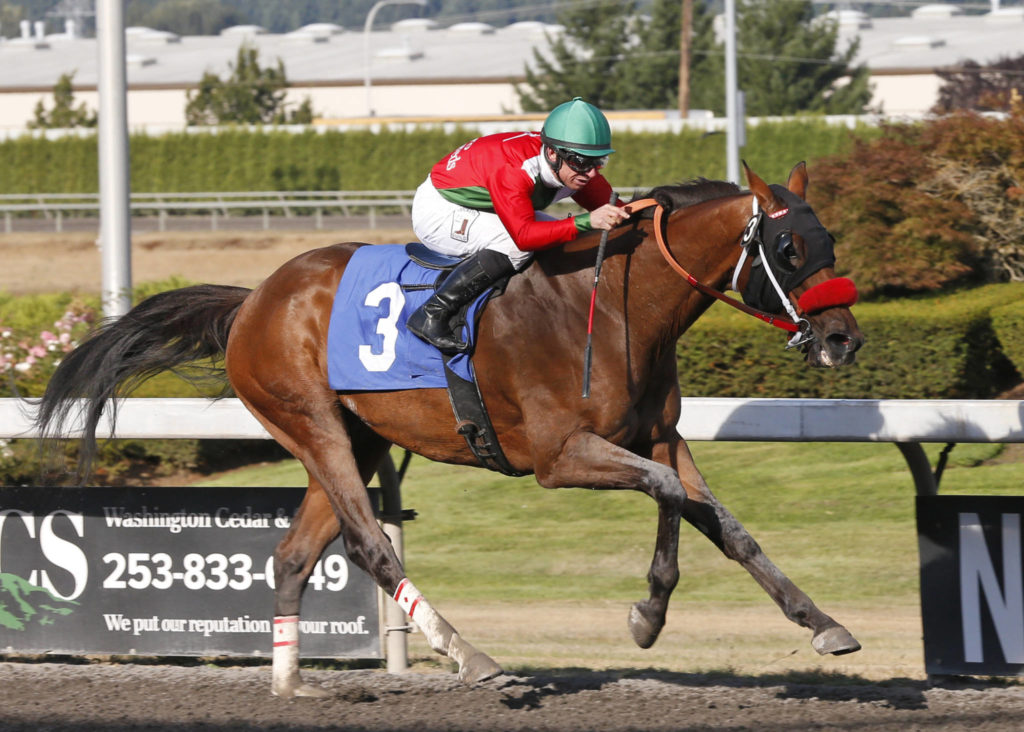 AUBURN, Wash. (August 19, 2017) – Botch came off the bench and rolled to a dominating 5 ½-length victory Saturday in the $11,200 Muckleshoot Casino Purse for 3-year-olds and up at Emerald Downs.

Botch shook off Perfect Night at the three-sixteenths marker, opened a three-length lead past mid-stretch and won with something left.

A 7-year-old Kentucky-bred, Botch has a fine history at Emerald Downs but hadn’t raced since finishing ninth for a $25,000 tag at Turf Paradise last February. A Brother Derek gelding, Botch has a lifetime mark of 7-4-5 in 38 starts with earnings of $115,243.

Trick Or Retreat, the even-money favorite, failed to fire and finished sixth.

Couton’s three-win day is his fifth of the season, and his 39 wins rank fourth overall. Those are impressive numbers considering Couton missed the first third of the meet while riding at Golden Gate Fields.

NOTES: Rockport Birdie ($4.80) made it six straight wins with a nose victory over Formal Choice in Saturday’s sixth race for $8,000 claiming fillies and mares at one mile. Winning her second straight for owner Paul Johnson and trainer Vince Gibson, the 6-year-old Rockport Harbor mare is the only six-time winner at the meet and Saturday marked her first career win around two turns. . .In addition to Couton’s riding triple, Rocco Bowen also had three wins and extended his lead to 98-51 on Kevin Orozco atop the standings. Bowen’s victory on Horsty ($3.60) in the nightcap gives him a 14-for-44 record this year when riding for trainer Charles Essex. . .Veteran trainer Bob Meeking is winding down the season in style. The 89-year-old conditioner has won with four of his last seven starters including Trelawny ($5), a 10-year-old Florida-bred that scored his 19th career win in Saturday’s third race. . .For the second straight day a horse was disqualified for interference, this time in a Quarter Horse race. In Saturday’s first race, Divide the Assets crossed the wire first but was placed fourth for causing interference twice, and Mps Mamou Jewels ($14) was promoted from second to first place. . .Live racing continues Sunday with first post 2 p.m. The 11-race program features three Quarter Horse stakes—$55,000 Bank of America Emerald Championship Challenge for 3-year-olds and up at 440 yards, $15,000 Distance Challenge for 3-year-olds and up at 870 yards, and $15,000 John Deere Juvenile Challenge for 2-year-olds at 350 yards.