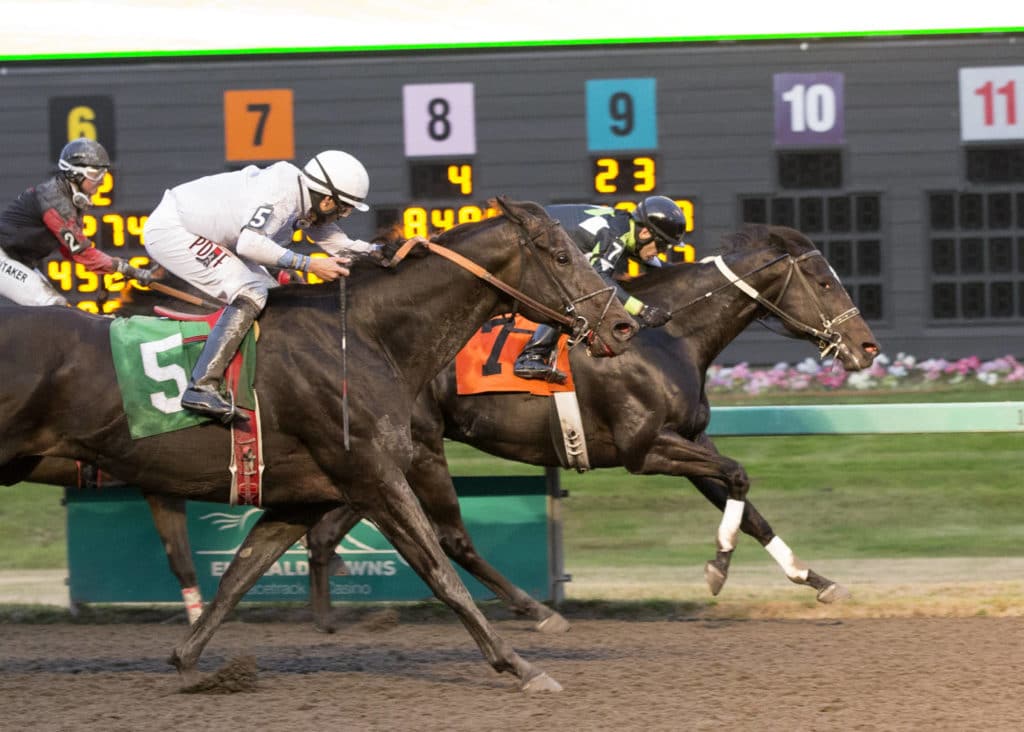 Grinder Sparksaglo (No. 7) holds off Hit the Beach

AUBURN, Wash. (August 17, 2019) – Grinder Sparksaglo shook off Mike Man’s Gold into the stretch and thwarted Hit the Beach late for a nose victory in the $18,500 feature race Saturday at Emerald Downs.

An 8-year-old Washington-bred gelding by Grindstone, Grinder Sparksaglo improved to 15-12-12 in 57 starts with earnings of $248,567. He scored his maiden win nearly five years ago, August 31, 2014, and has eight wins at Emerald Downs and seven at Portland Meadows.

Hit the Beach, the 2 to 1 favorite, surged late and just missed the victory. Ridden by Jose Zunino, the runner-up paid $3.80 and $2.80. The Press, ridden by Jennifer Whitaker, finished third and paid $7.20 to show, while Upo, Not Yet, Mike Man’s Gold, Unleash the Tiger, Boundary Bay and Cody’s Choice completed the order of finish.

Bidding for his record-breaking 22nd career victory at Emerald Downs, Mike Man’s Gold pressed the pace to the head of the stretch and gave way. And for the first time in five starts this season, the 9-year-old gelding wasn’t claimed and remains with trainer Joe Toye and owners Greg Conley and Chuck Conley.

Grinder Sparksaglo set fractions of :22.92, :45.92, 1:10.98, 1:23.98 before drifting in just before the finish. The stewards opened an inquiry and the rider of third-place finisher The Press also lodged an objection, but no change was made to the order of finish.

Baze said Grinder Sparksaglo would be pointed to the $50,000 Muckleshoot Tribal Classic for Washington-breds on September 15, where a victory would vault the gelding into the top 100 all-time Washington-breds in earnings.

NOTES: Frank Lucarelli scored his 999th Emerald Downs win as Old School Ike ($4.40) prevailed in Saturday’s fourth race. Lucarelli has seven horses entered Sunday including a pair of morning line favorites. . .The victory by Old School Ike gave owner Chad Christensen his meet-leading 20th victory, and he became only the 10th owner to win 20 races in a season at Emerald Downs. Swag Stables with 27 wins in 2009 owns the single-season record for most wins by an owner. . .Eddie Martinez bagged his second career hat trick at Emerald Downs and moved into fourth place with 40 wins. . .Gutierrez rode two winners and is fifth with 39 wins. Gutierrez, who recently celebrated his 50th birthday, has 1,359 wins at Emerald Downs and is 60 wins from tying Gallyn Mitchell for first on the track’s all-time list. . .Trainer Tom Wenzel reached double digits in wins for the 21st consecutive season when Johnny Five ($4.20) scored an easy win in Saturdays fifth race. Wenzel is No. 8 all-time with 377 wins at Emerald Downs and No. 6 all-time with 42 stakes wins. . .The $0.20 Jackpot Pick 7 paid $9.620.10 to one winning ticket. . .Longacres Mile nominee Higher Power scored a $21.20 upset in the $1 million TVG Pacific Classic for 3-year-olds and up at Del Mar. . .Live racing continues Saturday with a stakes double-header for 2-year-olds—$50,000 WTBOA Lads Stakes for colts & geldings and $50,000 Barbara Shinpoch Stakes for fillies. First post 2 p.m.