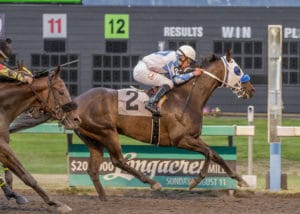 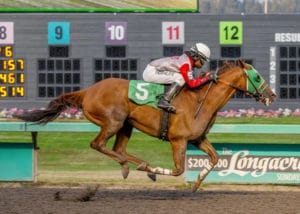 2019 MARATHON SERIES OFF TO EXCELLENT START

AUBURN, Wash. (August 10, 2019) – Party for One and Freddies Dream each won races Saturday as Emerald Downs presented two $13,692 divisions of the first leg of the WHBPA and WTBOA Horsemen Helping Horsemen Distance Series for 3-year-olds and up.

Party for One (left) ran 1 1/8 miles in 1:51.09 and paid $8.80 to win, out dueling Awesome Return in a prolonged battle and then holding off Cook Up a Storm for his 12th victory the last two years. Lorenzo Lopez was up for trainer Rigoberto Velasquez and owners Rancho Viejo and Jerry Carmody.

Freddies Dream (right) ran 1 1/8 miles in 1:49.84 and paid $10 to win, exploding between rivals into the lane and scoring by 8 3/4 lengths over Oldtimers Vision. Kevin Krigger rode the winner for Tim McCanna and Hern/LePley Racing.

The series continues Saturday, August 31 at 1-¼ miles and concludes September 21 at 1-½ miles. However, a horse must have run in the first leg to remain eligible, and there were five claims from Saturday’s first division (Party for One, Cook Up a Storm, Awesome Return, Pass Due Payment and Elwood J) and three from the second division (Freddies Dream, Oldtimers Vision and Thorn Legacy).