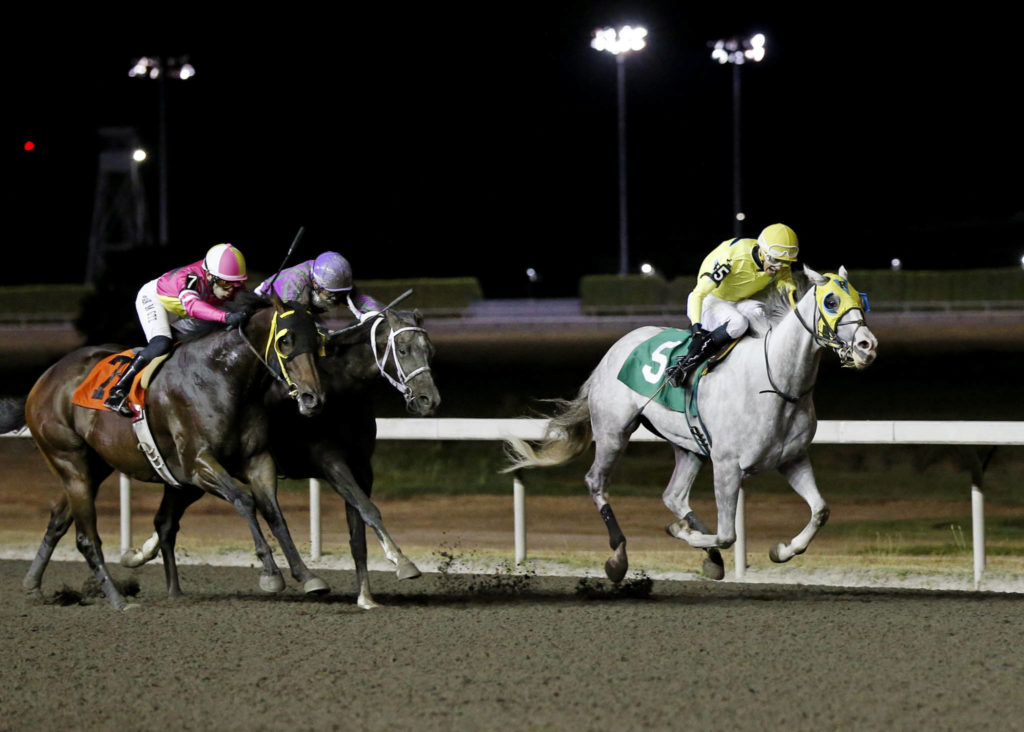 Y VEE R GETS THE MONEY IN FRIDAY FEATURE RACE

Ridden by Alex Cruz, the winner ran six furlongs in 1:10.78 and paid $16, $7.60, and $5. Robert Gilker—saddling his third winner from four starts at the meet—is the trainer and co-owner with wife Victoria and Ernie Chu.

Y Vee R stalked Trinni Valantine through fractions of :21.56 and :44.73, forged to the lead into the lane, opened two lengths in mid-stretch, and was fully extended to hold off oncoming Igottabooboo and Faithful Son for the victory.

A 4-year-old British Columbia-bred by Value Plus, Y Vee R earned $8,250 and upped his career bankroll to $22,781. His overall record is 2-1-0 in seven starts, the first six at Hastings Racecourse in Vancouver.

In Friday’s fifth race—the inaugural one mile and 70-yard race in track history—Stephen James and jockey Jose Zunino prevailed in 1:42.34, the occasion marked with a ceremonial certificate awarded to trainer Mary Pirone and owner Mike Dale. The North American record is 1:37.90 for one mile and 70 yards set by With Probability at the Meadowlands in 2005.

NOTES: Total mutuel handle was $952,314 on a seven-race card. . .Connie Doll rode Midnight Luter ($5.40) to a front-running score in the second race, the first win of the meet and 26th overall at Emerald Downs for the veteran rider. . .Seven different riders won races including Alex Cruz with his meet leading 79th on Y Vee R ($16) in the sixth. . .Silver King Bain ($3) prevailed in the seventh to give owner John Parker his 23rd win of the season; Paddock Partners is second with eight wins. . . James Carlin’s 3-year-old gelding Overly Fast ($7.40) sizzled 6 ½ furlongs in 1:15.32 under Eddie Martinez to become a triple winner at the meet for trainer Tom Wenzel. . .9-year-old Capital Expense posted a $25 upset in race four, blazing five furlongs in :57.18. . .Overly Fast owns the fastest five furlongs of the meet, :56.97, on May 28. . .Trainer Mary Pirone scored her first win of the season, saddling Stephen James to an $11.80 upset in race five. . .Long time bugler Dan Harrington was back on duty after missing six weeks with a pelvis injury. . .Live racing continues Saturday with post time 2:15 p.m. Simulcast action features undefeated Flightline at 1/5 in the $1 million TVG Pacific Classic at Del Mar. Post time is 5:40 p.m.