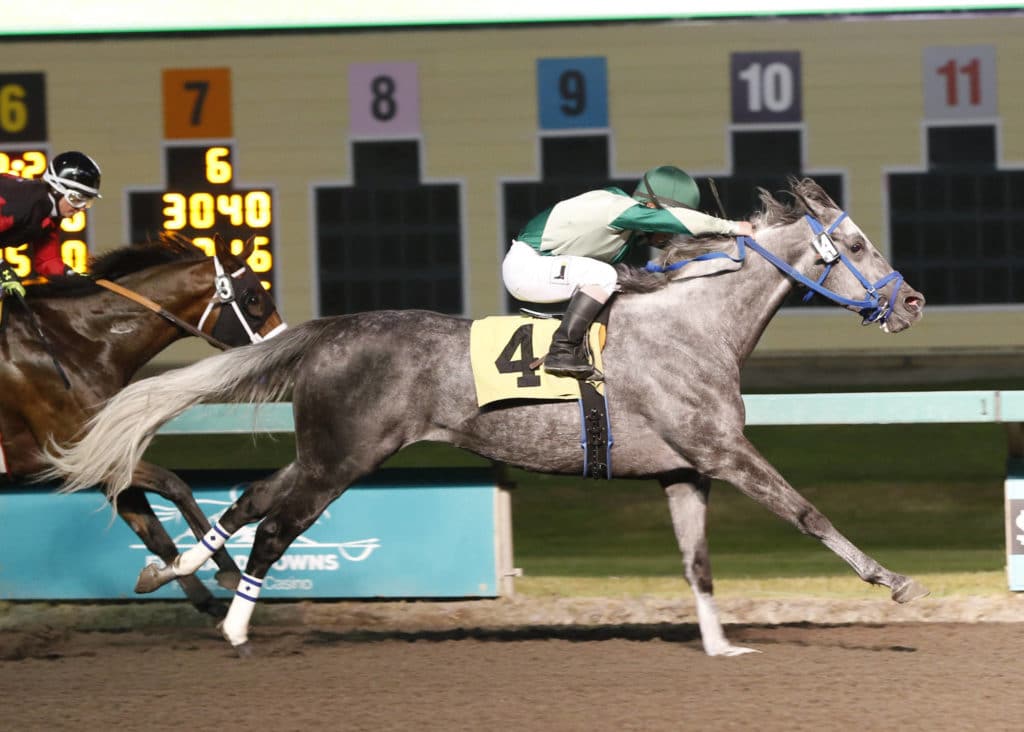 AUBURN, Wash. (May 25, 2018) – Grand Palais shook off Huya into the stretch and scored a one-length victory over The Press in Friday’s $15,600 Muckleshoot Casino Purse for 3-year-olds and up at Emerald Downs.

Blaine Wright is the winning trainer for owners John and Janene Maryanski of Auburn, Wash.

A 5-year-old Florida-bred by Grand Slam, Grand Palais has an overall mark of 5-6-3 in 19 starts with earnings of $74,602. After beginning his career on synthetic surfaces at Woodbine and Golden Gate, the gray gelding has thrived on dirt, finishing first or second in eight of nine starts.

Grand Palais earned the win Friday, dueling with Huya through fractions of :22.08 and :44.74, and holding off The Press and Estiqaa late for the victory.

The Press, with Jennifer Whitaker riding, rallied inside to finish second and paid $3.20 and $2.40, and Estiqaa, ridden by Gary Wales, finished third and paid $2.80.

Huya faded to finish fourth and Atypique and Mike Man’s Bro completed the order of finish; Hello Bourbon was scratched earlier in the day.

NOTES: Rocco Bowen rode four straight winners—races 2 through 5—and now leads Kevin Orozco 25-12 in the jockeys’ standings. Bowen, who turned 29 Wednesday, already has two four-baggers this season and wins on all 12 cards to date. Bowen’s wins were aboard Lucky Cleric ($11.80), Whirlington ($3.20), Crushin Candy ($3.60) and The Gold Monkey ($10.80). His bid to tie the track record of five straight wins on one card held by Kevin Krigger and Leslie Mawing ended with a fourth on Huya in the feature race. . .Kevin Radke and Seth Martinez share the record for most wins on one card with six. Radke won six races September 2, 2002 and Martinez had six wins July 27, 2008. . .Owners Sue and Tim Spooner, whose Ima Happy Cat won the Seattle Stakes last week, scored another victory Friday as homebred Whirlington romped to her maiden victory in race three. . .Also in race three, Cards N Coffee was declared a non-starter as the stewards determined jockey Erick Lopez wasn’t astride his mount when the gate opened. . .Racing continues Saturday with first post 2 p.m., including a carryover of $8,084 in the $0.20 Pick 7