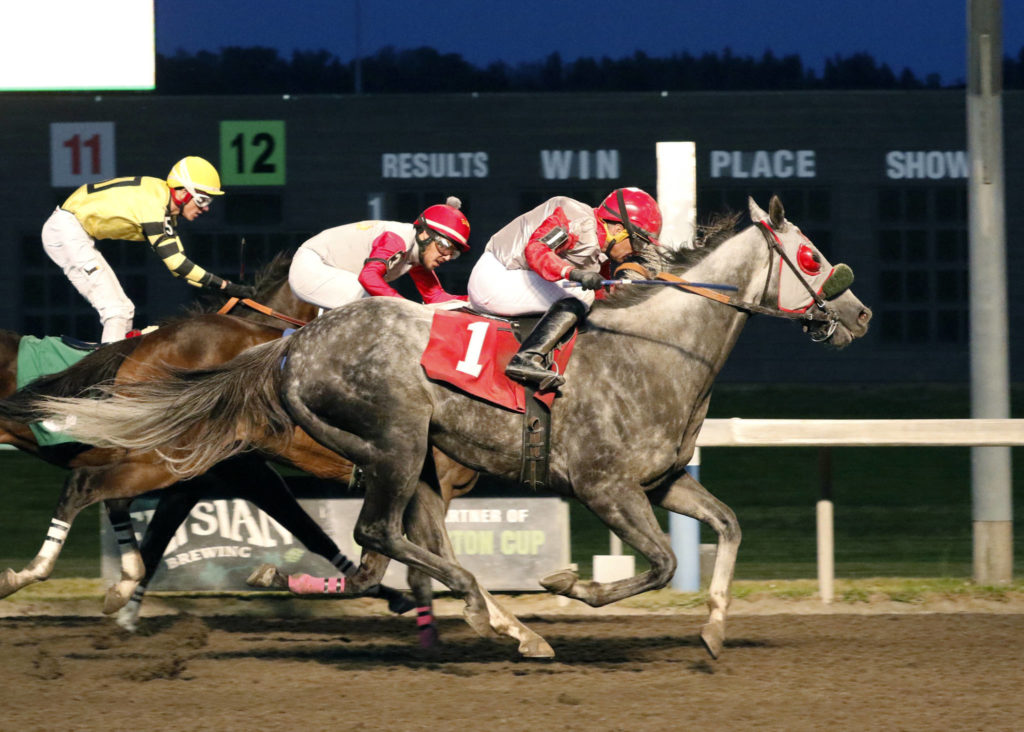 AUBURN, Wash. (June 24, 2022) – Hydrogen wore down Jedi Knight late for a neck victory Friday in the $16,500 Muckleshoot Casino Purse for 3-year-olds and up at Emerald Downs.

With Kevin Radke riding, Hydrogen covered one mile in 1:36.14 and paid $4.20 as the betting choice in a field of seven. Tim McCanna is the winning trainer for owners Hern/LePley Racing.

In fourth place early, saving ground as Mike Operator and Western Rule dueled through a half-mile in :46.61, Hydrogen angled out for racing room in upper stretch and closed strongly to nail Jedi Knight in the final strides.

Jedi Knight, ridden by Kevin Orozco, nearly pulled off a 10 to 1 upset, forging to the lead into the lane and just failing to last for the victory.

For McCanna, a 10-time Emerald Downs’ training champion, it was his first win of the meeting and 958th overall at Emerald Downs. A member of the Washington Racing Hall of Fame, McCanna trains mainly in California but still maintains a smaller string at Emerald Downs.

NOTES: Radke and Kassie Guglielmino both appeared to escape serious injury after going down in Friday’s second race. Parker’s Gold with Radke aboard was dueling between Gunnin for Gold and Deshambeau when the 2-year-old son of Gold Rush Dancer appeared to fracture a leg turning for home, sending Radke cartwheeling to the track. Secret Saga with Guglielmino aboard then stumbled while attempting to jump over the fallen Parker’s Gold, unseating Guglielmino and sending the jockey hurtling to the ground as well. Radke was able to ride the remainder of the card, but Guglielmino sustained a broken fibula. Secret Saga finished the race without a rider and appeared to be OK. . .Radke currently is second with 22 wins while Guglielmino is seventh with seven wins. . .Deshambeau ($14.60) and jockey Kevin Orozco prevailed in :51.54 for 4 ½ furlongs. . .Trainer Jorge Rosales and jockey Alex Cruz combined to sweep races three, four, and five with Dyf ($5.20), Upo ($4.60), and Sir Deputy ($3.20) . . .Rosales has won with 10 of his last 17 starters and leads Frank Lucarelli 11-10 in the trainers’ standings. . .Cruz tops the jockeys’ standings with 27 wins,15 of which have come on the last four Friday nights. He had five-wins on June 3 and 17, two wins on June 10, and three on June 24. . .11 horses claimed Friday including Hydrogen and Rob’s Lucky Spirit for $10,000 each in race six. . .14 to 1 winners bookended the card with American Royalty ($30.80) taking the opener and Street Demand ($31.20) winning the nightcap. . .The latter gave owner/trainer Bob Bean his first win of the meet. . .The $0.20 Jackpot Pick Six carryover is $24,486. . .Live racing continues Saturday with Ladies Day (all Ladies in for free) with first post 2:15 p.m.
–##–