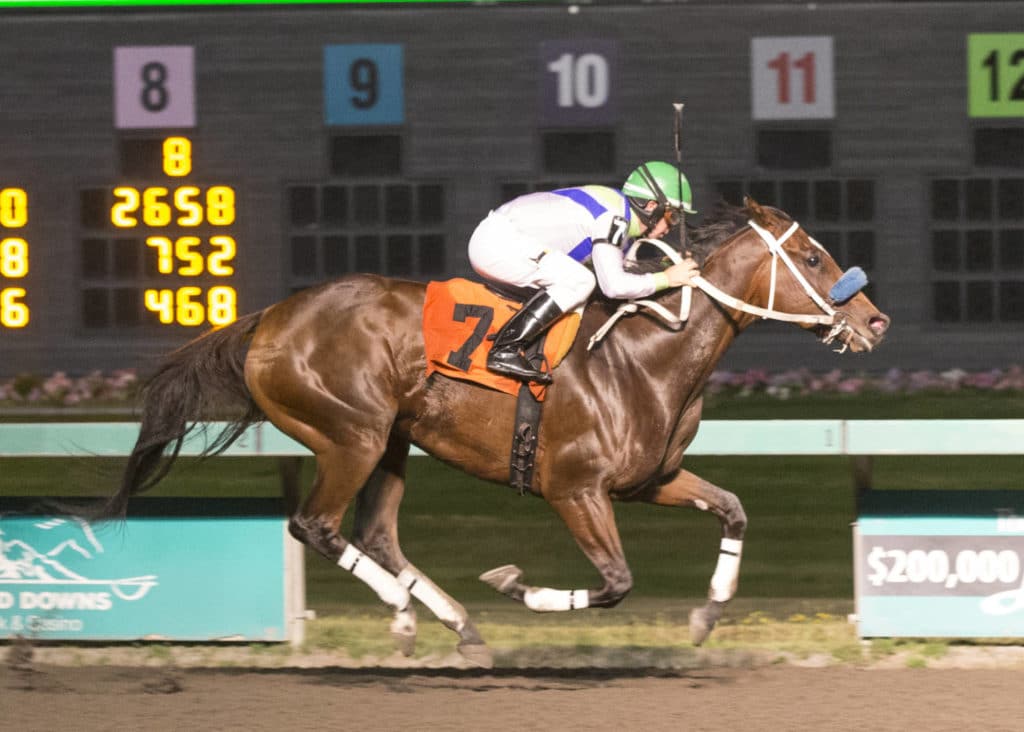 Tomorrow’s Mine and jockey Gary Wales

TOMORROW’S MINE SHARP IN DISTANCE SERIES

AUBURN, Wash. (August 30, 2019) –Tomorrow’s Mine surged to the lead in midstretch and scored a 1-¾ length victory Friday in the second leg of the $18,400 Equal Pay Distance Series for older fillies and mares.

Indian Power, the leader to mid-stretch, held second and paid $8.80 and $4,60, while Choteau, the 7 to 5 betting favorite, finished third and paid $2.40. Raspberry Punch, Constant Craving, Invite Me and Staracrossthewater completed the order of finish.

Peach of a Pie, winner of the first leg of the series three weeks ago, was scratched earlier in the day.
Friday’s race was an $8,000 claimer and Choteau, Constant Craving and Staracrossthewater were all claimed.

The final leg of the series is 1-½ miles on Friday, September 20, and will be run under starter allowance conditions.

NOTES: In addition to Tomorrow’s Mine, Conley, Conley and Terra Firma Farm send out Mike Man’s Gold on Sunday, as the 9-year-old gelding attempts to win his record 22nd race at Emerald Downs. . .In Friday’s fifth race, Battle Point Red finished first but was disqualified and placed third for interference, with Ivy Mike ($8.80) promoted from second to first place. . .Eddie Martinez rode three winners on the seven-race card and Wales rode two winners, his meet-leading 84th and 85th of the season. . .Pre Mo Diamond ($11.80) prevailed in race seven to give owner Chad Christensen his 22nd win of the meet and trainer Frank Lucarelli his 59th. Christensen needs six wins in the final 11 days to break the single-season record for wins by an owner while Lucarelli needs eight wins to break the single-season record for training wins. . .Washington-bred Pas de Panique finished fourth in the $100,000 Im Smokin Stakes for 2-year-olds at Del Mar. Square Deal ($6.40) was the winner in 1:11.72 for six furlongs. . .Live racing continues Saturday with first post 5 p.m., featuring two divisions of the second leg of the marathon series for older male horses.
–##–