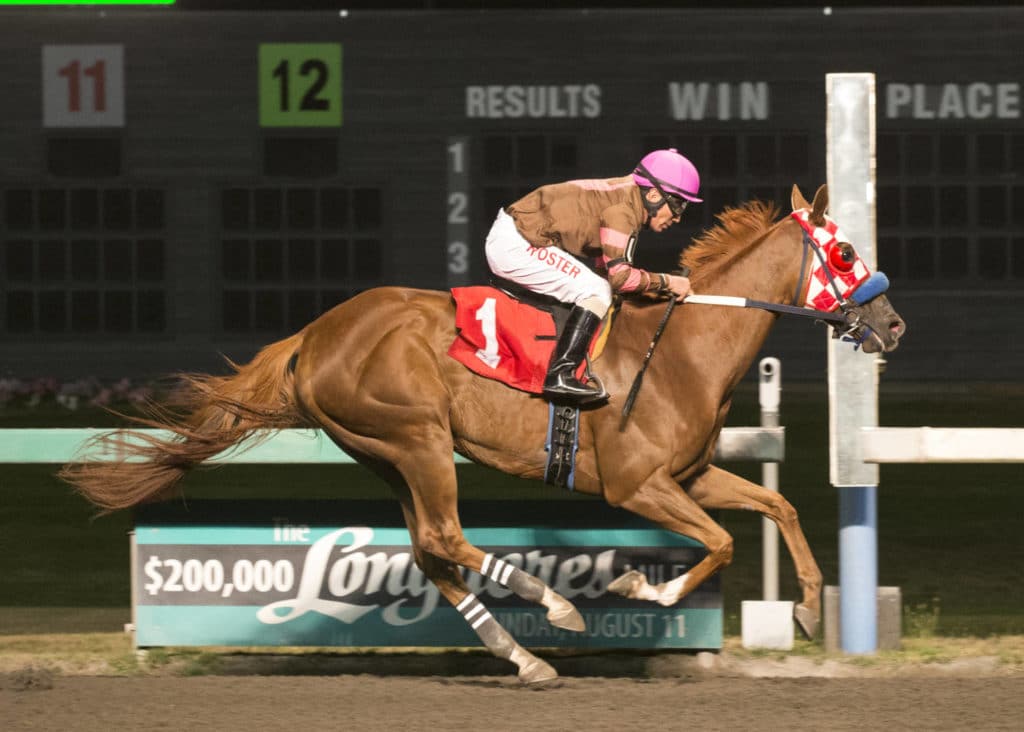 BEAU ROCKET ALL THE WAY IN FRIDAY FEATURE

AUBURN, Wash. (August 16, 2019) – Beau Rocket continued her winning ways Friday evening at Emerald Downs, leading all the way for a 6 ½-length victory over stable mate Crazy for Gold in the $11,300 Muckleshoot Casino Purse for older fillies and mares.

Crazy for Gold, also trained by Wright, finished well and was easily second best Friday. Ridden by Kevin Orozco, the runner-up returned $2.60 and $2.10.

Angelofmontgomery, the even-money favorite, finished a distant third and paid $2.10, while Lesedi, Made for More and Forbidden Maria rounded out the order of finish.

A 4-year-old California-bred by Heatseeker-Beaulena, Beau Rocket has won two straight and is 3-0-0 in four lifetime starts with earnings of $20,055. Beaulena, also owned by Sherman, earned over $200,000 and captured the 2007 Boeing Stakes while trained by Richard Wright at Emerald Downs.

Also Friday, Frank Lucarelli moved within two wins of 1,000 career victories at Emerald Downs. The track’s all-time leading trainer with 998 wins, Lucarelli and owner Chad Christensen clicked with Fleet Marie ($2.60) in the fifth race. It was Lucarelli’s 54th victory of the season, tying his personal single-season Emerald Downs’ high mark set in 2006. For Christensen, the meet’s leading owner, it was his 19th win of the season.

NOTES: In an extreme rarity, Friday’s second race featured one gelding taking on six fillies in a $15,000 claimer for 2-year-olds. The gelding—Dangersmymiddlename—finished third as Lovefliesonwings ($19.20) prevailed in :59.97 for five furlongs under Juan Gutierrez. The winner is a Swag Stables’ homebred by Atta Boy Roy–No Flies On Doodle. . .Atta Boy Roy is within two wins of Harbor the Gold for most winners sired at the 2019 meeting. Harbor the Gold leads with 17 wins, followed by Atta Boy Roy with 15 and Coast Guard with 12. . .David Martinez saddled two winners Friday, his 100th and 101st at Emerald Downs. . .Javier Matias rode two winners, his 530th and 531st at Emerald Downs, and is one win away from tying Kevin Radke for seventh place on the track’s all-time list. . . Apprentice Lorenzo Rivera, who rode his first career winner last week, suffered a leg injury in a Thursday training accident and is sidelined indefinitely. . .Live racing resumes Saturday with an eight-race card at 5 p.m., and includes a bid by Mike Man’s Gold to become the all-time wins leader at Emerald Downs.
–##–