He’s Not Grey and Gary Wales

AUBURN, Wash. (April 20, 2019) – He’s Not Grey would not be denied Saturday as Emerald Downs’ began its 24th season of live racing under mostly sunny skies.

In the featured Muckleshoot Casino Purse, He’s Not Grey continued his winning ways with a two-length victory under jockey Gary Wales, zipping 5 ½ furlongs in 1:02.72 and returning $8.60, $4.40 and $4. Candice Cryderman is the winning trainer for owner John Parker of Lake Bay, Wash.

A 4-year-old California-bred by Slew’s Tiznow, He’s Not Grey has won four straight races including three straight to end the 2018 season. The gray gelding is 5-1-1 in nine career starts with earnings of $55,447, including a victory in the 2017 Emerald Downs’ Express.

Parker—who hopes to threaten the single-season owner’s record of 27 wins set by Swag Stables in 2009—has either won or tied for leading owner the last three years at Emerald Downs. 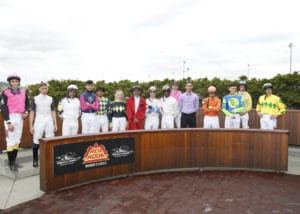 Bob’s All In, ridden by Kevin Orozco, rallied strongly in the stretch for second and paid $7.80 and $5.20. Guardingthemoney, ridden by Jose Zunino, held third and paid $11 to show, while Wine At Nine, Iron Rob, Levitation and Remembertobreathe completed the order of finish.