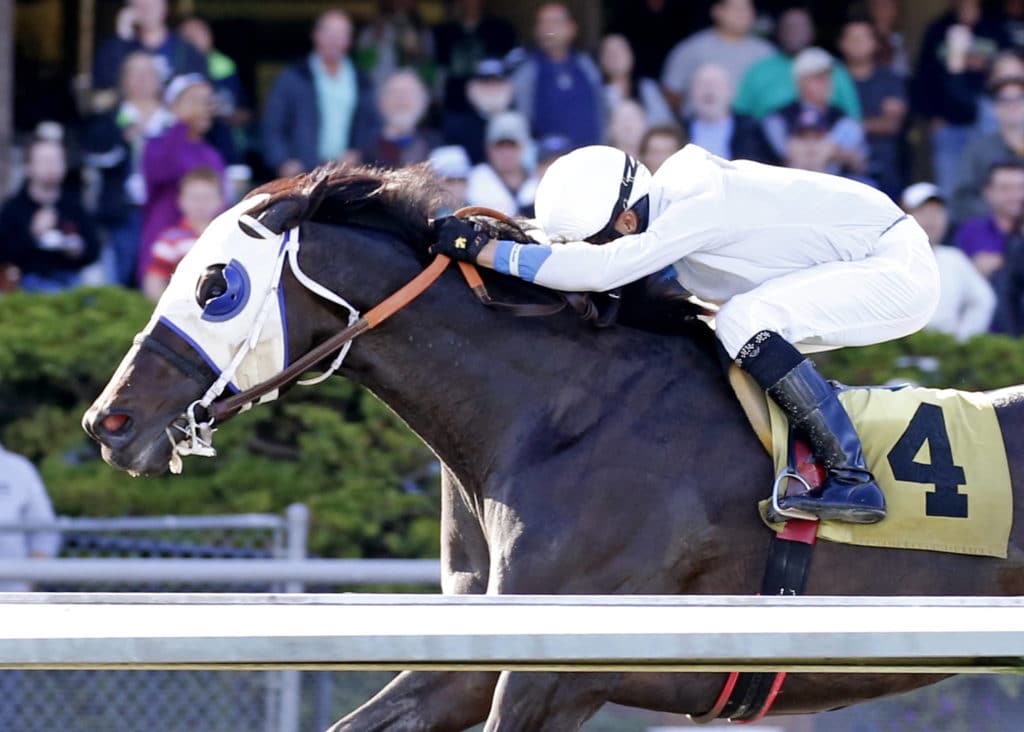 The eight-horse field includes only two runners, Capital Expense and Awhitesportscoast, that have raced in 2019; the other six have been off since last fall at Emerald Downs. Under allowance/optional claiming conditions, only Capital Expense is in for the $30,000 tag.

Hit the Beach capped a glorious 5-year-old campaign with back-to-back wins for 91-year-old conditioner H.R. Pat Mullens, rolling from slightly off the pace to score in the mile and one-sixteenth Mucklehsoot Tribal Classic and 6 1/2-furlong Pete Pedersen Overnight Stakes. In the latter, his 1:13.99 clocking translated to a 90 Beyer which was highest by a Washington-bred in 2018.

Winless last year as a 3-year-old including four defeats to Horse of the Meeting Sippin Fire, Elliott Bay was a double stakes winner as a 2-year-old and has earned $114,400 for Rising Star Stable II and Howard Belvoir.

Grindersparksaglo is a multiple stakes winner at Portland Meadows and also has fared well at Emerald Downs, racking up over $134,000 in purses here for Richard Sena and Robbie Baze. Cody’s Choice won four races last year at age 3 including a win over Grindersparksaglo in the Inaugural at Portland, but faces a potential pace duel vs. Capital Expense and Freiburg. 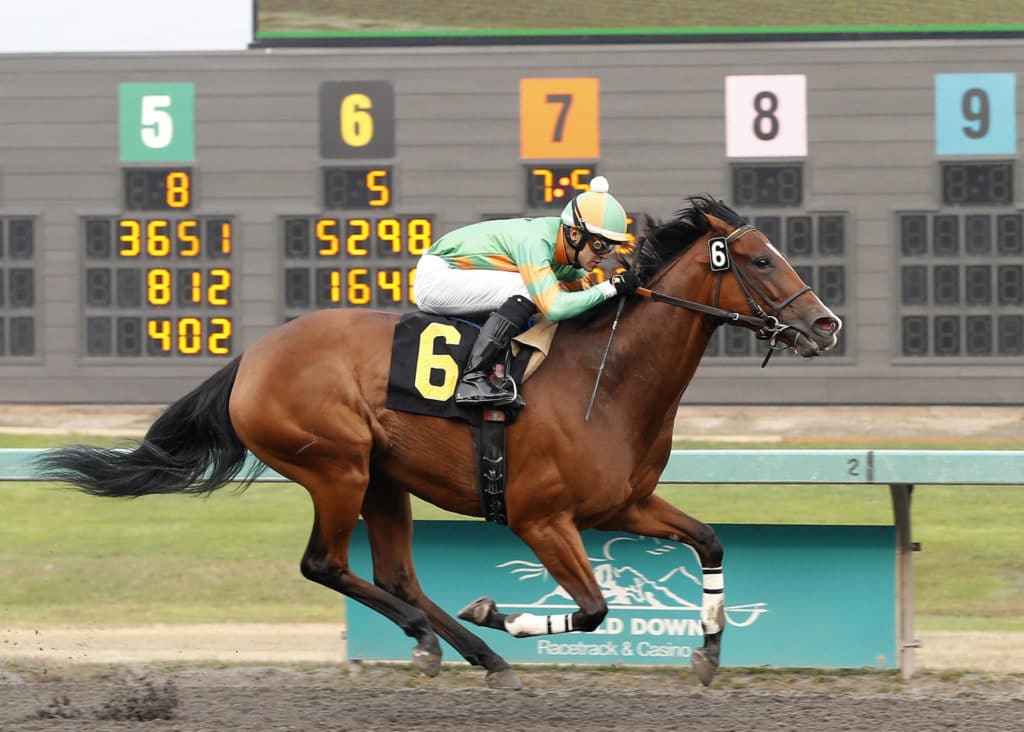 Saturday’s eight-race card is highlighted by an $18,500 dash for a tough group of allowance/optional claiming fillies and mares at 5 ½ furlongs. Carded as Race 7, the eight-horse field includes 6-year-old mares Guardian One and McDove, both multiple winners in 2018, and 6-year-old Jerre to Carrie, a seven-time winner at Emerald Downs.

The fifth, an $18,500 maiden special weight for 3-year colts and geldings, features a promising field of 10 at five furlongs. Time ’n Time Again, second in last year’s Gottstein Futurity, makes his 2019 debut for Poseidon Partners and trainer Kay Cooper. A Washington-bred by Nationhood, Time ’n Time Again fired in all four starts last year but had an unlucky campaign, culminating with his disqualification to 11th place for fouling Frolic and Detour in the Gottstein.

Frolic and Detour might have won the Gottstein with clear sailing on the rail, but clipped heels past mid-stretch and unseated the rider. Owned by Washington Racing Hall of Famer George Todaro and trained by Tom Wenzel, Frolic and Detour will be ridden by Northwest newcomer Ryan Barber.

Trainers Blaine Wright and Chris Stenslie entered two runners each. Wright sends out Perfect Dude, a Majesticperfection colt out of multiple Emerald Downs’ stakes winner Gadget Queen, and Zippin Wine, a $75,000 City Zip colt who adds blinkers after finishing out of the money in his lone start last year. Zippin Wine also is entered back Sunday in a $18,500 maiden special weight for 3-year-olds and up. 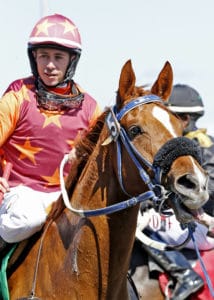 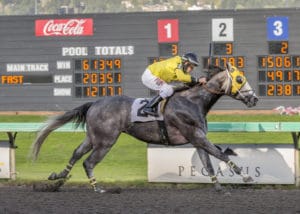 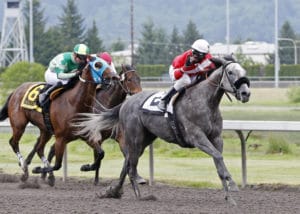 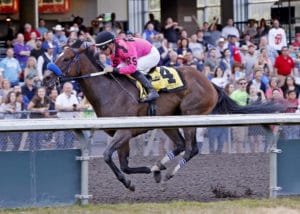 NOTES: Heribert “Eddie” Martinez makes his Emerald Downs debut Saturday with mounts in all eight races. A native of Mexico, Martinez has ridden in North America over a decade including a fifth-place finish at Northlands Park with 58 wins in 2010 and tying for 10th with 35 wins at the 2017-18 Golden Gate winter/spring meeting. . .Ryan Walt, a four-time winner here last year, returns to action in the Sunday opener for $2,500 claimers. Ryan Walt’s $2 win prices in 2018: $18.40, $36.60, $16.40 and $42.40. . .Also in Sunday’s first race, 12-year-old Trelawny-winner of 22 races and over $500,000-returns for trainer Bob Meeking. A Florida-bred gelding, Trelawny began his career at Woodbine on November 9, 2009. . .Papa Mambo, who won a meet-high five races and voted Top Claimer in 2018, is with trainer Joe Toye at Turf Paradise and will return to Emerald Downs after the Phoenix track closes May 5. . .Copy Begone, 10-21 lifetime at Emerald Downs, is entered in Sunday’s seventh race for $10,000 starter allowance fillies and mares. . .Golden Gate’s 13-race Saturday card features six stakes including the $200,000 San Francisco Mile (G3) for 3-year-olds and up on turf. Emerald Downs’ stakes winners Ima Happy Cat (left) and Alliford Bay (right) meet in the $75,000 Camilla Urso for older fillies and mares at five furlongs on turf, and Whatwasithinking, upset winner of the 2018 Auburn Stakes, faces the Blaine Wright-trained Anyportinastorm in the $75,000 Lost in the Fog for 3-year-olds and up at six furlongs on Tapeta. . .Sun Downs opens its six-day meeting with a 10-race card Saturday. The Kennewick oval offers live racing April 27-28, May 4-5 and May 11-12. . .Invested Prospect, a triple stakes winner at Emerald Downs, has been retired and bred to multiple Grade 1-winning sprinter Lord Nelson. . .Erick Lopez, who rode exactly 100 winners the last three seasons at Emerald Downs, is riding at Parx in Pennsylvania and is 4-42 through Wednesday.
-##-